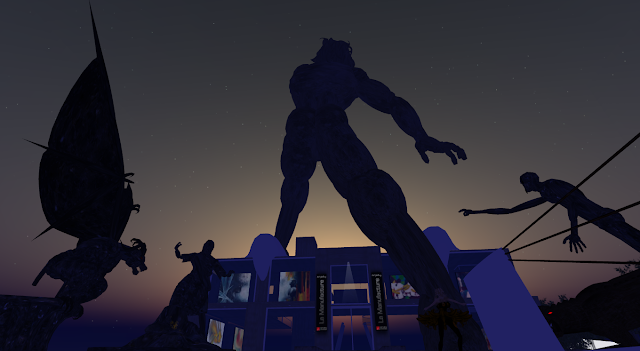 I don't think anyone in SL deserves a free ride, it's not OpenSim dammit.
Art in Second Life has always been run on a dodgy economic model (just like art in RL) -  exactly the opposite system to that of consumer goods. The more complex and well crafted the hair, clothes, or animation, the more you expect to pay for them. I'm not even going to say the word 'shoes'. In SL, the least able artists are often the ones making money while the really big talents don't make a bean from their work.
Asking money for yourself because you think you're better than everyone else is lame, and makes people respect you less. However one cause that really seems worthwhile is  PiRats which is a Metaversal Treasure. Newbab, Merlina and their whole team work really hard, not to promote their own egos, but to encourage new ideas, new creative spirits. LL is not going to give them free land, and they'd be fools to join the LEA, because (in case it hasn't dawned on you yet) one fine day the Lab is going to pull the plug on that institution and everyone who's counted on it is going to find themselves high and dry.
What price independent art in SL then? Give a little to Pirats. Everyone can afford to give something, and every little will help. I believe the time will come when all the really good art will be in Open Sim, but that will only work when the audience is there too. For now, places like PiRats are the best hope for consistent independent art. True, it's a place that's occasionally nuts in a Gallic way, and is gifted with ferocious lag and art of wildly uneven quality, but the genuine community spirit, where even a beginner gets a look in, should be precious to us all.
Some of the contribution suggestions PiRats Appeal page seem crazy high, but don't let that put you off.  You can use your real life name Paypal and have the contribution show up under your SL name. I just gave them ten bucks, which is two lattes; perhaps you can do the same. Click here, and help PiRats survive.

Email ThisBlogThis!Share to TwitterShare to FacebookShare to Pinterest
Posted by Unknown at 5:09 AM Labels: Pirats art network

I would agree in the case of PiRats that this is a worthwhile cause, as PiRats has supported so many artists across time.