What, then, shall we do?
John Cage

What, then, does Machinima in Second Life do?

Iono Allen makes machinima. He gained fame as a noob, with A Question Of Honour, in which long-time friend and colleague Larkworthy Antfarm also appears. It was shortlisted for an exhibition at MOMA, no less. The cinematic power of the film's unspoken story is even more remarkable since Allen had never made machinima before coming into Second Life. You will find 44 original uploads on his YouTube channel, with his latest short, Passion, notably available in full only on Vimeo, but more of that later. 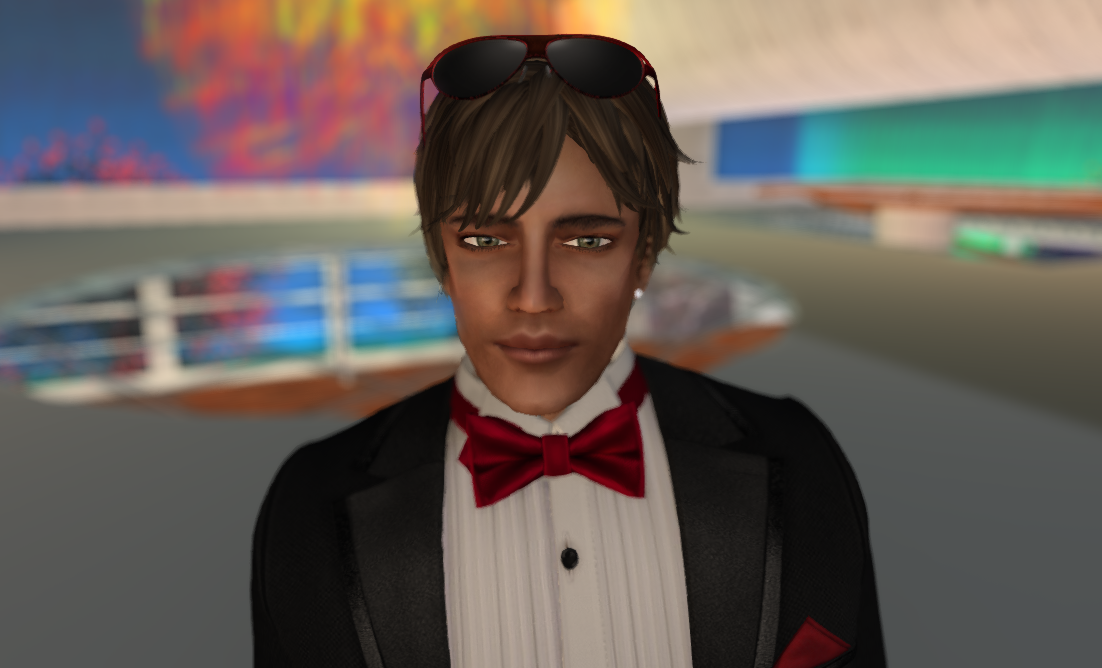 Second Life Machinima is not fan-mod or art-mod, to borrow Rebecca Cannon's terms; it doesn't sit with the taxonomy of mainstream machinima with its professionally built sets and scripted or meta-scripted quests. It's quite easy to make a slick looking short when you have a game like Halo as a backdrop, and quite another thing with the homegrown props and lag of Second Life.

A lot of the film shot here is frankly dreadful, as you'll know if you've ever looked at the entries to the big machinima competitions, and it's dreadful because quality machinima is hard to make.

It's hard to make because it requires good content, good equipment and the ability of the film maker to manipulate both with an excellent eye. And good help.
Larkworthy Antfarm: Iono and I go back to the early days of machinima.  Practicing at Burning Life.  Entering contests.  The thing we did for MOMA was pretty spectacular as they projected us on the outside of the building. We were one of 25 chosen out of 100,000's of entries,  I was just the actress. He is good, very very good.  That French film maker's eye.  Expressionistic. Conveys emotions so well.  He avoids the Hollywood classical narrative style.  We try to make of machinima a new art form.  Poetic. Of course Hollywood is wonderful or has been at times. Peter Greenaway says it is a passe way of telling stories. We have done it all in this narrative form and we machinima makers should try for a different effect.  Iono understands this. He also exhibited amazing patience as I ran across a bridge and repeatedly fell off for 50 takes.
Perhaps Cannon's terminology should not be rejected too soon, for (setting aside his promo work) Iono's films can be divided into categories, 'documentary' or 'fan mod'; and original work, or 'art mod'. The documentary work involves filming large installations by some of SL's best known artists, including Maya Paris, Adam Ramona, Betty Tureaud and Artistidee Despres. He shows a sensitivity and an eye for detail that expands and expounds upon the themes set out by the artist.
Let's be clear, we're not talking about a narrated walk-through with labored explanations.
From Fusion, set in Bryn Oh's Rabbicorn build of 2010/2011, to  Nine Steps to Heaven, a Betty Tureaud install, he has the good sense to keep quiet and allow the environment to sing its own stylistic song, sometimes quite literally, as in the case of Misprint Thursday's Digital Glove. It's a clever move, because the flaws, where they exist, appear to belong to the builds rather than the film maker. And while his technique has undoubtedly evolved and improved over the years, the overall impression is one of a nostalgic snapshot not of his abilities but rather of the SL scene as a whole. From his very earliest works, filming Adam Ramona's A Prim's Happiness, the viewer is struck by his sensitivity to the sound, not just the look of a build, and this is particularly effective when the artist conveys half their message via that medium, as is increasingly the case in sophisticated installations.

In his film of Maya Paris' Celebrity Blow Your Tits Off  build, he captures the interactivity without comment or bias, but as pure participant, a clean lens through which the fun shines unalloyed. Maya Paris is easily the most talented story-teller in the SL art scene, but people are often having too much fun to notice. The first-person experience of a specific installation will often be fragmented and disrupted by IMs, lag, and poor graphics settings. Having the valuable second sight of a well-made machinima gives the viewer a chance to digest their own recollection in context and are inspired to go back and see the build again and again. The same applies to his visit to Miso Susanowa's State of Mind, a build so packed with irony, imagery, and information that it was overwhelming, and it requires more than your average mind to analyse the build and present a cogent, flowing survey of its elements.
Call it a sort of intellectual helicopter ride over the grand canyon of ideas, if you like.

Allen's ability to get under the skin of the builds he records is particularly striking when one compares the three machinima filmed in installations by Arteé Despres. While Did you ever go to Fukushima (with Lollito Larkham) and All is the for the best in the best of all possible worlds faithfully capture their sense of middle-class angst at pollution and recession, it is the third film, Photography is a way of life, that captures a part of who Arteé is in a way that is deeper, more intimate, and infinitely more worth telling, slicing below what we think we should care about to what we really care about, in this case the sublime serenity of the captured image.
Sublime, too, his delicate lens caressing the metaboat in This is not a boat, a build by Eupalinos Ugajin. From the same artist we have the materia prima for Kou Dada, one of Allen's best machinima, in which he cleverly lifts and separates Eupalino's nonsense with a reading by John Cage, Ligeti's madrigals, and some exquisite camera angles.

It is with Rose Borchovski that Allen comes to a peak in his enjoyment of speaking aloud other people's stories. Alongside the legendary curator and festival organizer White Lebed, UWA guru JayJay Zifanwe, and friend and colleague Larkworthy Antfarm, Allen cites Rose (Saskia Boddeke) as his greatest influence.
His four machinima The Story of Susa Bubble,  Fears, Falling, and The Arrival chart the current chapters of the Susa story in cinematographic brilliance; The Inevitability of Fate remembers the intimate and terrible impact of the Shoah.

Iono Allen: I owe thanks to the person who created these incredible characters in such an imaginative world, in which I felt like a fish in the sea: my great friend Rose Borchovski. She just gave me the opportunity to film her world, to film it again, and again... I am totally addicted to her art.
What does machinima do? Remember, record, rename? As we have seen, machinima often share a name with the builds they document; are they appropriating art, just as Duchamps' name eclipses Mutt? Certainly, Allen is not turning any of these installs on their side, as it were, rather, he embraces their core with the sensitivity of a storyteller. No surprise, then, that alongside the fan-mod machinima, we find art-mod, Allen's art, his own stories. He has followed the early success of A Question Of Honour with a number of machinima expressing tropes of love, loss, and identity, avatar style. Of particular interest is Self Reflections, because it is one of the easiest of his films to overlook, a series of images of SaveMe Oh walking through different light effects. It asks the viewer to meditate on their perceptions of identity taken to the max: SaveMe, heroine or troll, viewed as bad or good, black or white, a love or hate totem, yet carrying a colorful kaleidoscope of chaos in her wake, none of it real, perceived through that thick lens which is the wall of blind prejudice the virtual world throws up between our viewer and the next person's, placing us all in a false light into which we do well not to trust our hearts (or our tempers) too much.

Love and identity, or rather the identity of love, lies at the heart of his latest film, the explicit short  Passion, and there will be more original machinima, as the days of filming other people's builds (with the exception of Susa chapters) have probably drawn to a close. And why not. What shall machinima do, if not offer the choice of what we see and remember? What we appropriate, in terms of recollection and allegiance? Indeed Allen has more to say as he develops the theme of self, memory and love in a variety of ways, with a stronger verbal element in Birth, and True Life, and more delicately in the extremely effective

Virtual Love in which, with help from brilliant puppeteer Josiane Sorciere, and not a single word, he revisits the oldest story ever told. With accordion music. Excellent.