The curtain is coming down on a stellar SL career. Feathers Boa is such a strong, vibrant, beautiful person with a wonderful future ahead of her; in order to fulfil that potential, she is saying goodbye, and retiring from SL.
We were all three of us crying a bit, Feathers, Explorer Dastardly and me, (silly girlz) as she started setting up her Last Ever Show at the Feathers Bay Gallery on sim Esterhal. 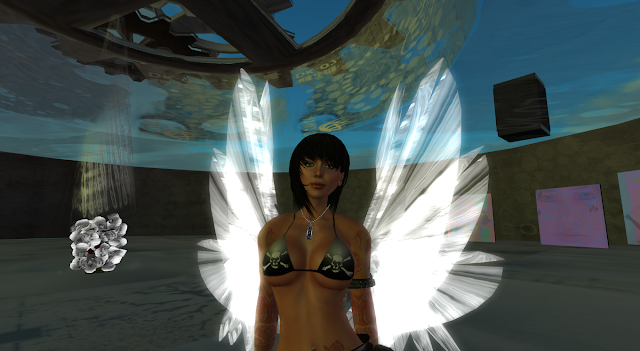 Feathers Boa: I am too busy in RL, I have no time for SL these days. I will fill this gallery space up, and my last day here will be June 29, the date my SL bill comes.
If you're a bit shocked that the LEA or some similar
body hasn't come forward to offer her work permanent space, despite her well-publicized departure, well, that was never really Feather's style. She laughed a little at the thought. 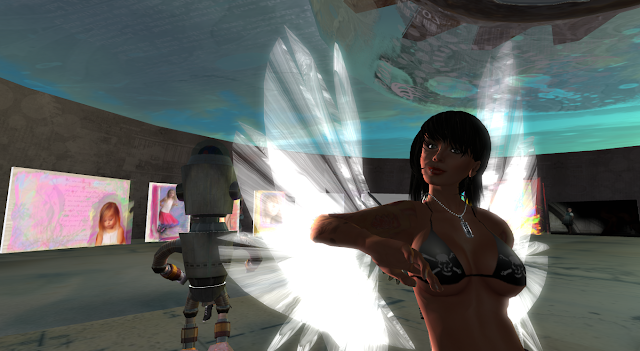 Feathers Boa: Well, I am not really all that into stuff like that guess. Besides, I'm not famous enuff for LEA, and anyway, I don't wanna belong to any club that will have me as a member!
I still think it's the LEAst they could do. Sorry... I've been wanting to say that out loud for weeks.
In a way, maybe the lack of 'institutional' interest is a good thing. Knowing you've poofed it all out of existence makes it easier to make a real break with the Life, which as we all know has a habit of sucking us back in despite the best of intentions.
As she put down pieces that are part of SL Art heritage, I wondered which ones mean the most to her, as a woman and an artist. She immediately chose the tryptych "Little Girls", with a commentary that tells, from a child's standpoint, the chilling tale of what is means to grow up in an abusive home. 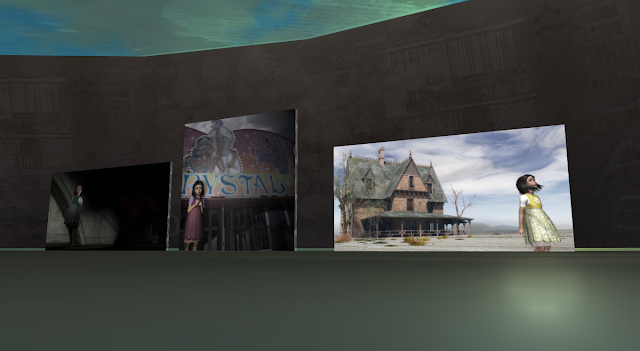 Close friend Explorer, instead, chose the haunting but optimistic 'Butterflies' series, showing the 7 ages of a woman, reviewed long ago here, when it was on show at AHO. Curiously, that was a crossover RL/SL post, she's always seemed so very real to me.
Two faces of Feather's artistic message, although for many, it's the clockwork pieces they remember best. I asked her about that.
Feathers Boa: Those steampunk ones were like me testing the waters. These are more what I am as an artist. With the clockwork pieces, I was experimenting. I was not confident back when I did those. In my pictures, like Little Girls, I just wanted to reveal something about me to everyone who looks at my stuff. I wanted what I did here to mean something. not just look cool. I don't do art to show off or to get accolades, I do it from my heart to express what i feel inside, even here. I think some SL artists are more like designers than artists. I did that in the beginning, but I stopped early and started making from my heart. 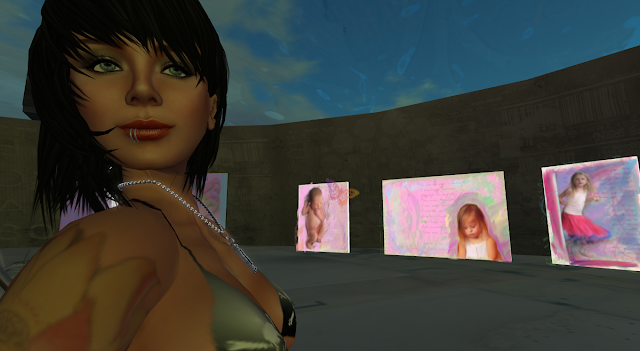 And so it has been. She is a kind of walking poem; the voice of her art has such clarity, depth, and harmony, even when dealing with painful subjects, and she has made SL richer by sharing with such honesty things that are often hidden.
Now working as a junior designer in Seattle, Feathers is loving the RL scenery of the Pacific Northwest, as well as the great variety of live music and the vibrant art community in the city, and she plans to put on a RL show of her artwork next year.  What will she miss from SL? Well, perhaps not the virtual art world, which she feels is too commercial. Nor will she miss the pressure that goes with being a well-known figure, something that runs contrary to her rebellious nature - and is 'too much like work' to be fun. But she will miss the many good friends here, and the opportunity to socialize at odd hours of the night with unseen dear friends all over the world.
Feathers Boa: It's emotional looking at all these old pieces. It makes me sad. It's a big deal, leaving.
Gone for good? She leaves the door open, I'm glad to say.
Feathers Boa: Maybe someday I'll come back and play around ... 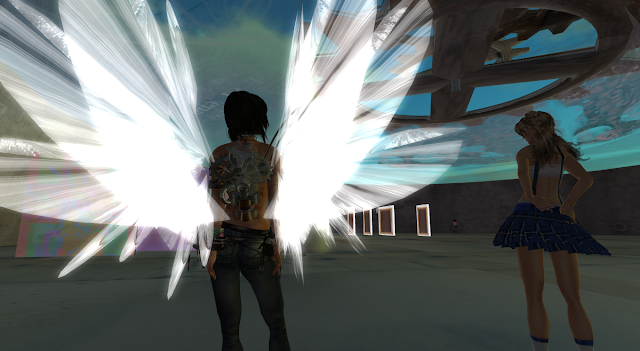 Feather's Last Ever Show opens at 11 am SLT on Saturday June 11 for your final opportunity say your goodbyes to this dear and unique artist, and to pick up a piece or two of beautiful SL history.

Incredible tribute to an amazing artist. She will be missed.

incredible? surely you mean EPIC. You're right, Feathers is an amazing artist. Let's hope she stays in touch.

Not only an EPIC artist, but an EPIC blogger.