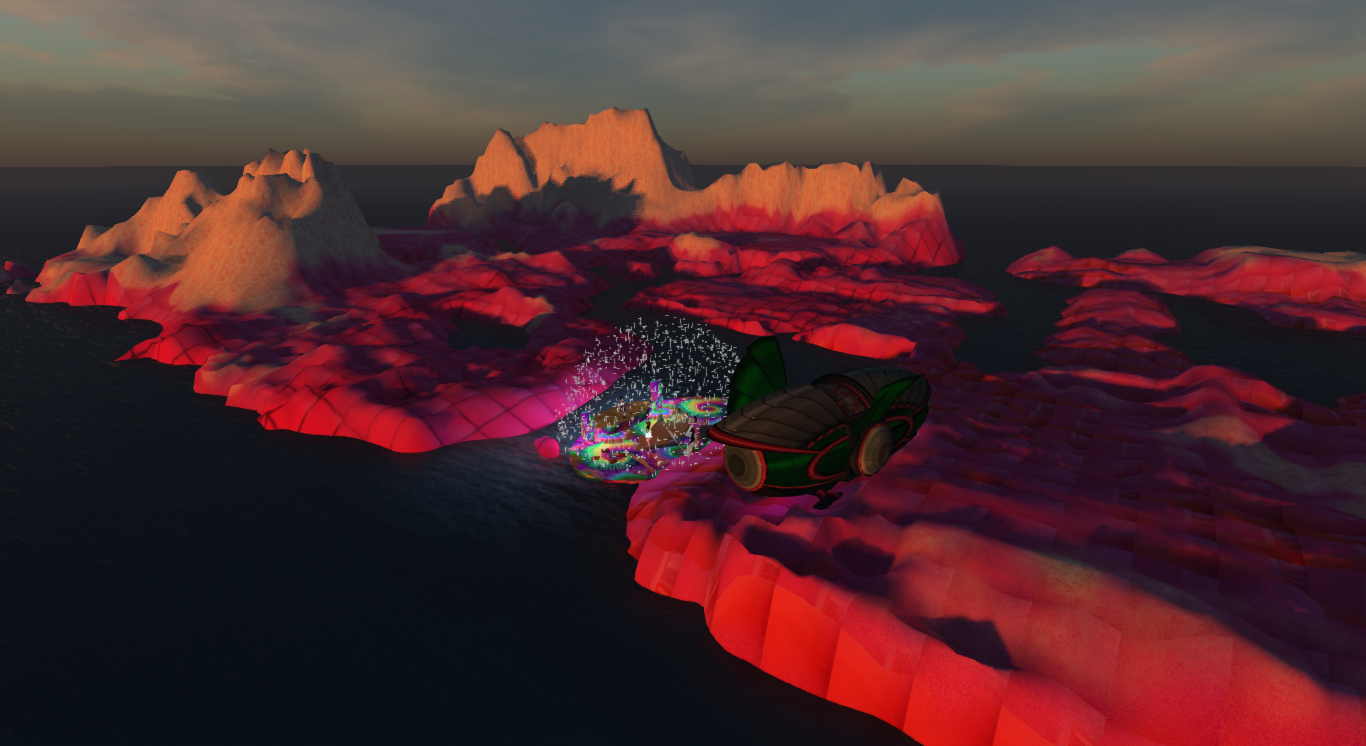 It was a tie dye goodbye.
Four Bridges has been in Second Life since as long as most of us can remember, and sadly today, it is no more. The region offered a home to harmonious ideals, activism, to awareness of real life issues, both social and ecological; many fine builders have worked here, notably Trill Zapatero, and there have been countless ensemble art pieces, expos, poetry events and concerts. So why is it closing? The reasons are the usual ones - time and money. In a good way, really, because Four Bridges founder Millay Freschi is busy getting a Master's degree in RL, and also in a good way because change offers a challenge and new opportunities. 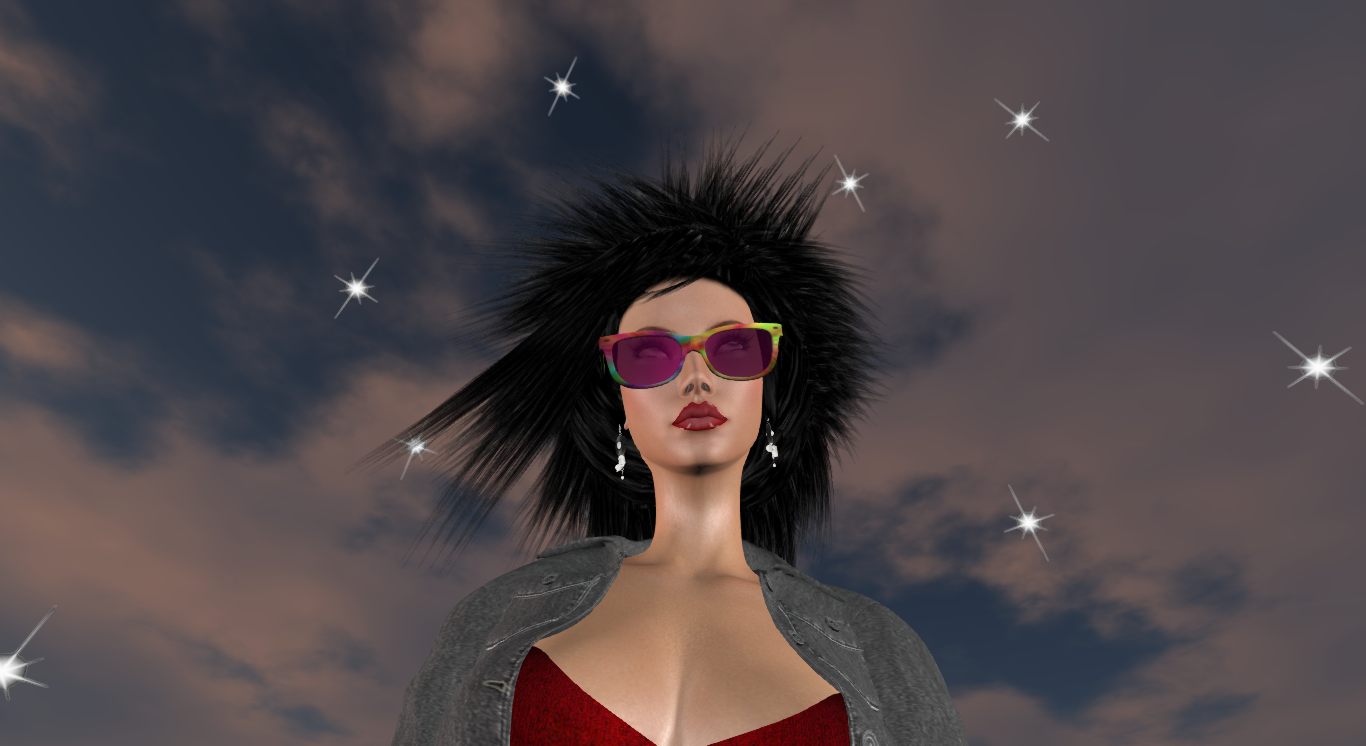 That doesn't make it easy to say farewell, though. Even when you have Ultraviolet Alter weaving her usual magical music. And sparkly particles everywhere. That's Apmelina in the stripey yellow dress. She has issues; don't tell her I said so. 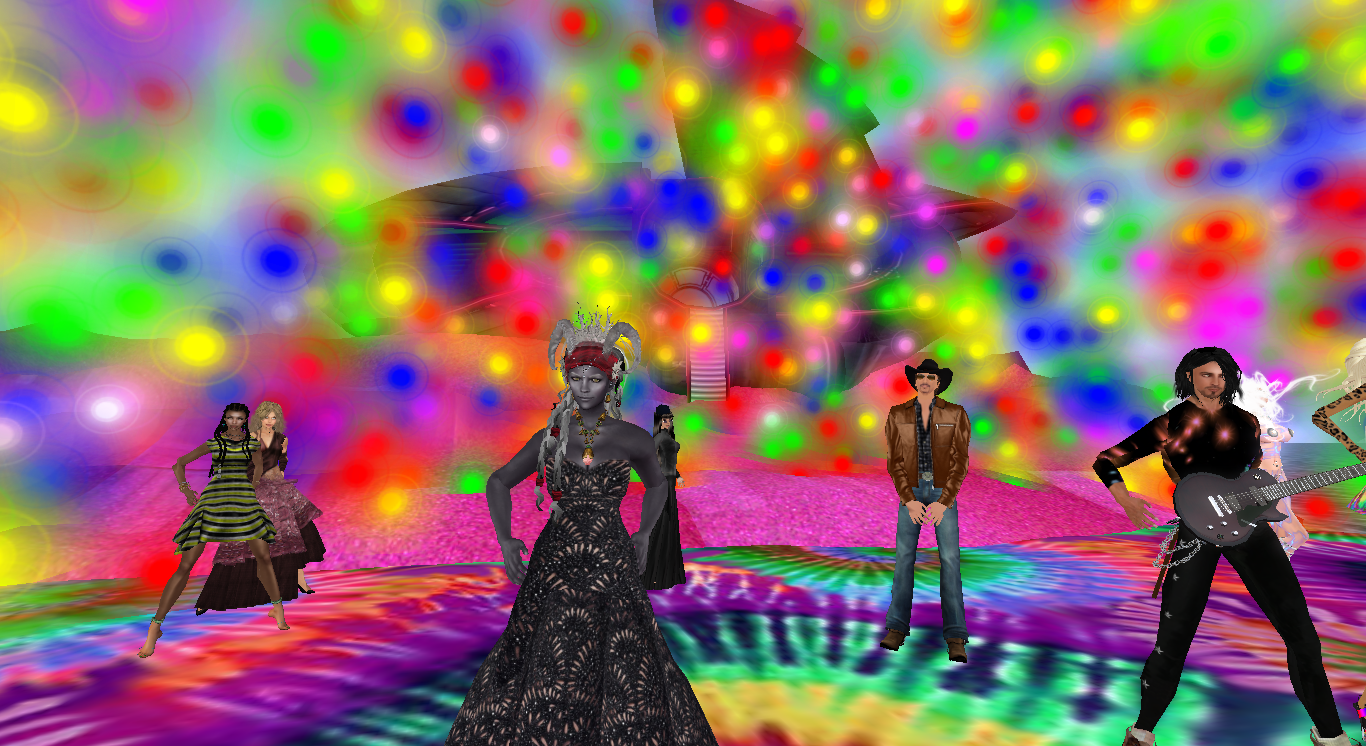 Magique: I've been squatting here for 4 years, it's meant everything. This is my home, going away. I think we went through a life cycle. When we started in 2008 all things were possible and in time we found rough edges, some activists thought it perfectly acceptable to be backstabbing and nasty to other activists.  Juni, Medora, Millay, Cotton, and I never found that acceptable. I called their bluff, and the leftist leaders quit SL. This is the end to that era and the beginning of something new and hopeful. SL activism shall never be the same. We are moving on to bigger and better things. RL will be a focus for a while and we might end up back here or on the New Platform, or High Fidelity or OpenSim... lots of possibilities...

Did you ever wonder, why four? Turns out they're the four core principles behind the project. Click here to read what they are (and maybe join the group). The Four Bridges Pproject's website is a lovely example of how important issues raised in Second Life can be presented to the outside world in a seamless, serious and classy way. For even more information, Millay gives a lovely explanation of her philosophy and her approach to activism and virtual worlds, in this edition of  Talk! with Marie back in 2010. She has a nice voice, and some lovely ideas.
Six years in Second Life is a pretty good run, many projects and regions can't boast similar longevity, and Luna Branwen has many fond memories of the place over its lifespan.
Luna Branwen: ...reading at Red's, when I was a fair noob, also more recently, spring this year I think, Magique's gathering people to rally for peace. It's a place of spirit and a place of peace but also always high energy with Magique and Medora. There is Cafe Wellstone.. and then there are many meditation places, but Four Bridges.. seems all encompassing. 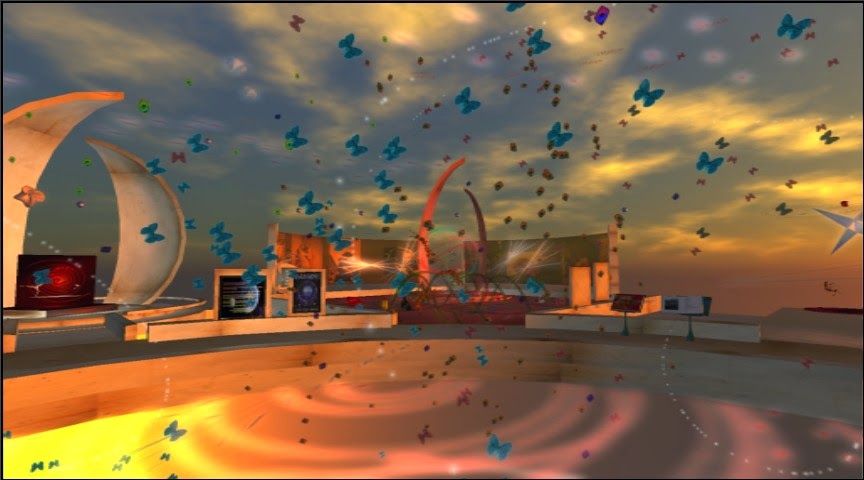 By the time we got to the party last night, the poetry bit was over, the music well on its way, and LL had already removed Aurakyo Insoo's Imagine Nest, here's a photo of it by Medora.
Medora Chevalier: For more than 6 years Four Bridges has brought together people from many continents and creative areas to share their thoughts and inspirations to make the world a better place.  Under the leadership of Millay Freschi it has hosted many of SL's leading musicians, artists, poets and campaigners. It has raised issues including peace, the environment, violence against women, social justice, child soldiers, poverty and human rights. None of this will be forgotten and its impact continues to ripple out in virtual and real worlds.

And on a personal note?
Medora Chevalier: there is a grieving for a loss - for 4B but especially AuraKyo's work which has just disappeared now. But I'm determined to bring people together around these themes. First of all we must remember that 100 years ago "the war to end all wars" broke out- yet wars still rage. Time to for us all to speak up and not be equivocal about some wars being 'good'. Each one makes an enormous shadow on the future.

Whether you're a keen activist or simply sympathetic to the general principles behind 4B, you'll be glad to know that the members of the group will not be stopping their efforts to inform, soothe, delight and enlighten any time soon. Perhaps later today, you can go to hear Jana Kyomoon's 'Moonday' concert and on August 4th at Medora Chevalier will be holding a World War I memorial event here  at her home on sim Heckroth.
0 comments

They may be taking the proverbial, giving her LEA 1. Because nothing could be further from her mind than using just one prim, or even one thousand. 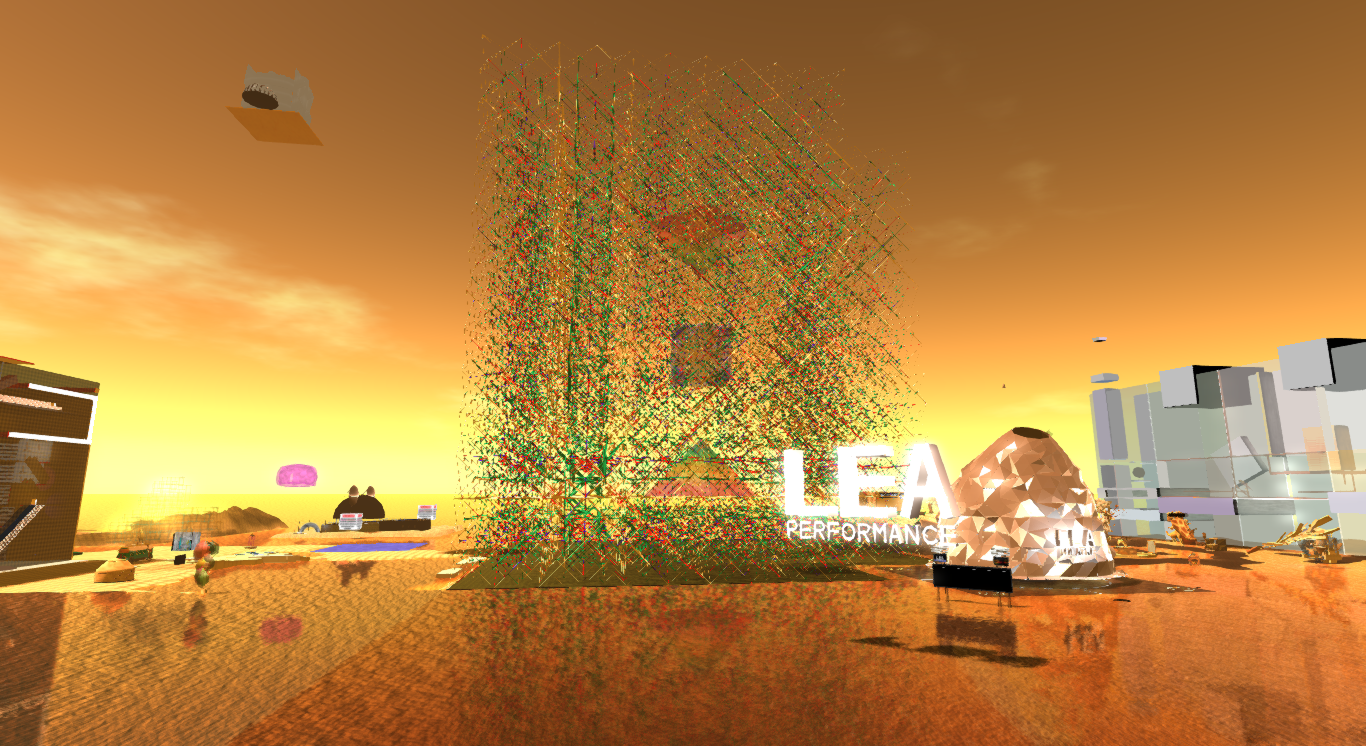 Wizzy Gynoid: let's just say there are more prims on this sim than you have seen on any sim in Second Life.
How does she make a place like this? In InWorldz, she put up a 80k structure using a rezzer, but here the 0.7 diameter struts were all lovingly placed by hand. Or so she claims.
Wizzy Gynoid: It's true! I did some calculating obviously.
Obviously. And it's not finished.
Wizzy Gynoid: Still have to do some work on it; I want to install elevators that you can ride up and down, and thru it.
The build is called Ctrl Shift R, better known as Wireframe.

Wizzy Gynoid: You see the idea is that we are all made of these triangles.  It's why i have the triangle tattoo on my own skin.
It's not compulsory to go into Wireframe when you visit the build, but it's fun, and more than that.
Wizzy Gynoid:  It's suggestive. It's in the background. It's surrounding you, even as it underlies our virtual reality, until Philip and his whatever they're called... voxels. The idea is that he can solve the latency problems. Which I for one would welcome, as long as it is free to play. 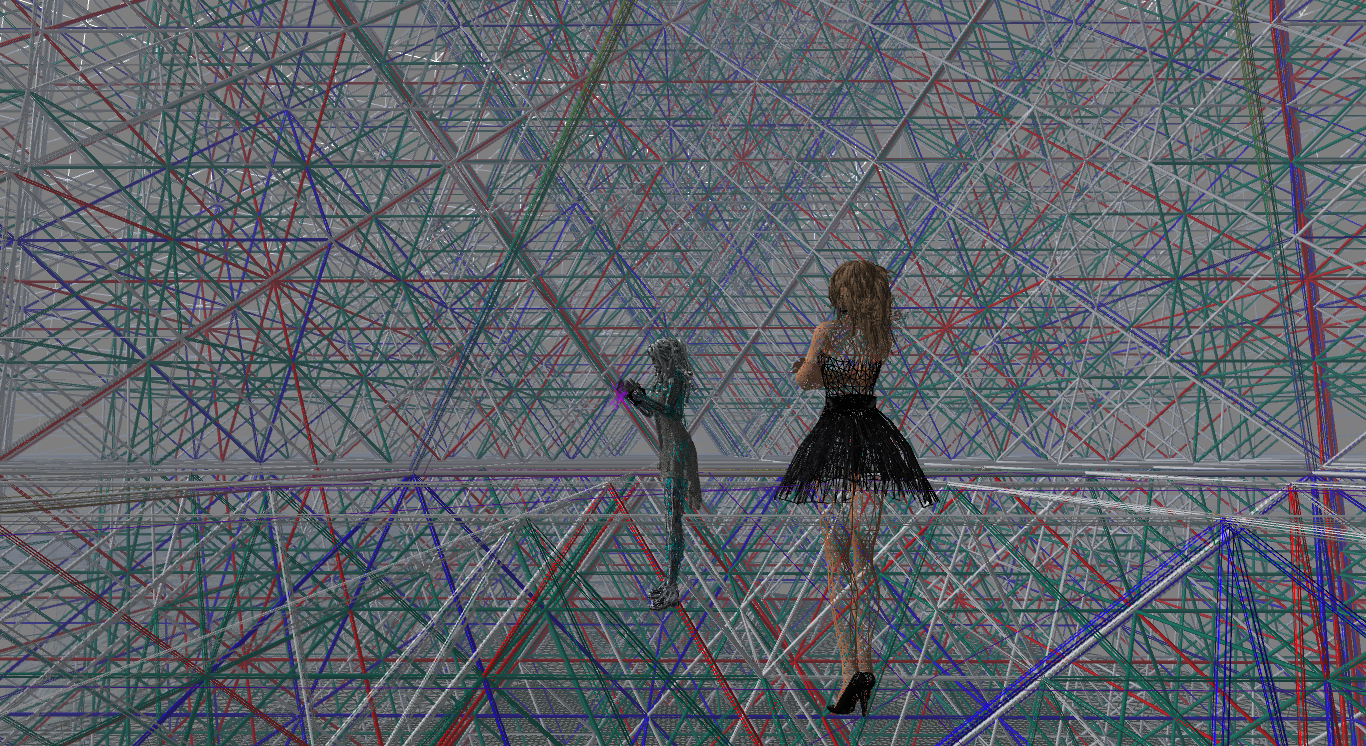 Interestingly, Wireframe doesn't really work with Ultra graphics settings, which is what I usually walk around in. And lag is something I rarely experience, even in Ultra, with the draw distance set to 1000, as in these pictures. But of course, as Wizzy pointed out, there weren't 100 avatars present, as there will be on the day of her opening party.
But that raises an interesting question. Well, maybe two, but my laptop is none of your business. The second question, what really causes lag, is more interesting. It's not entirely prims that cause lag. It's people. People who have their sim full of timer scripts, not Art wearers. Folks who don't restart their regions often enough. Idiots with overblown particles coming off their bodies. People who put a script in every prim of a 120 prim hair, for example, because they are terrified if it is Mod you're going to steal it, when anybody so inclined could just bot the thing and be done with it. Or, do what I did for open sim, take the time to construct something very similar, in which case, the hair creator lost out on the cash I was willing to pay to get a full perm copy, and (after 17 trial versions) I gained a heck of a lot of building and texturing experience.
Ctrl Shift R stands out in the LEA landscape like a cloud billowing above the LEA performance space, which is reminiscent of a tin foil hat to keep out the alien radio waves. Don't let them know what you're thinking! 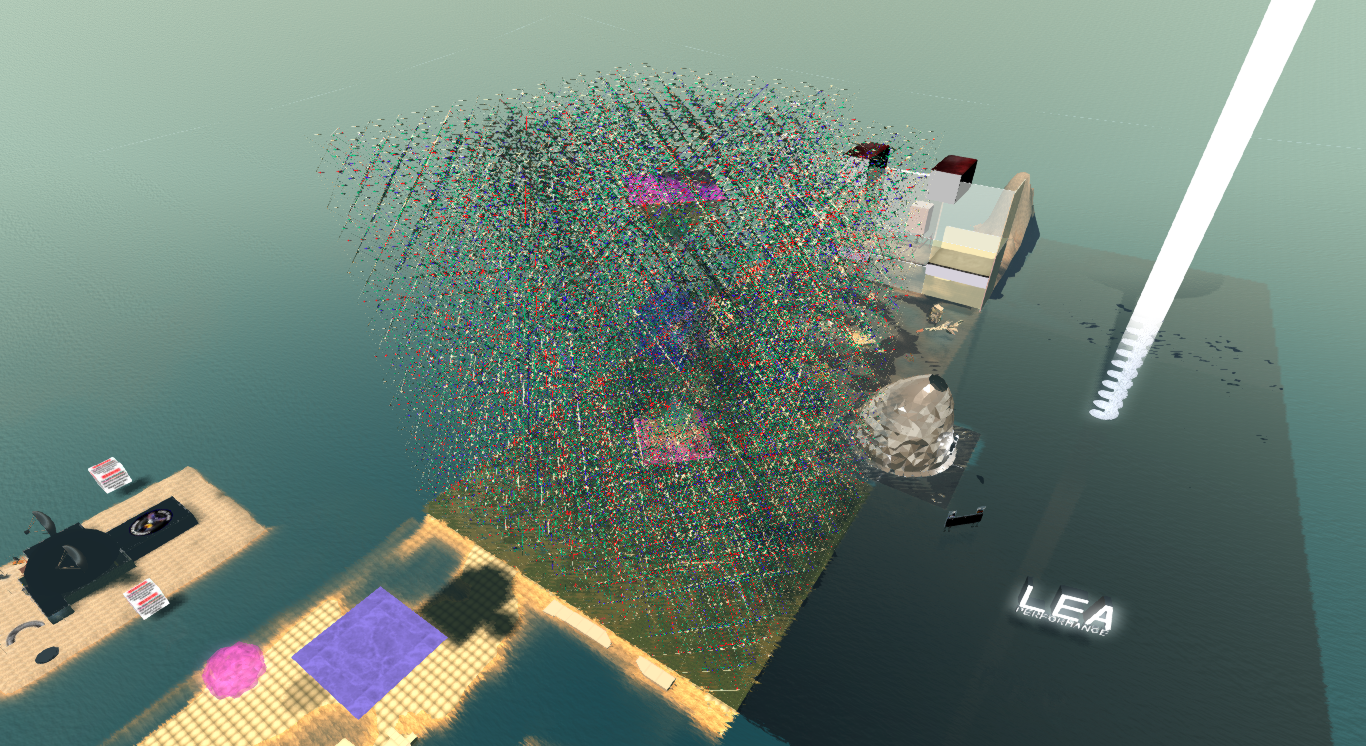 Wireframe is fun, but the dance floor is best seen in normal view -it's in the heart of the building. Shockingly there was no meeroo barbecue on display. How come?
Wizzy Gynoid: they take up too many prims.
Fair enough. Email ThisBlogThis!Share to TwitterShare to FacebookShare to Pinterest
Posted by Thirza Ember at 4:44 AM 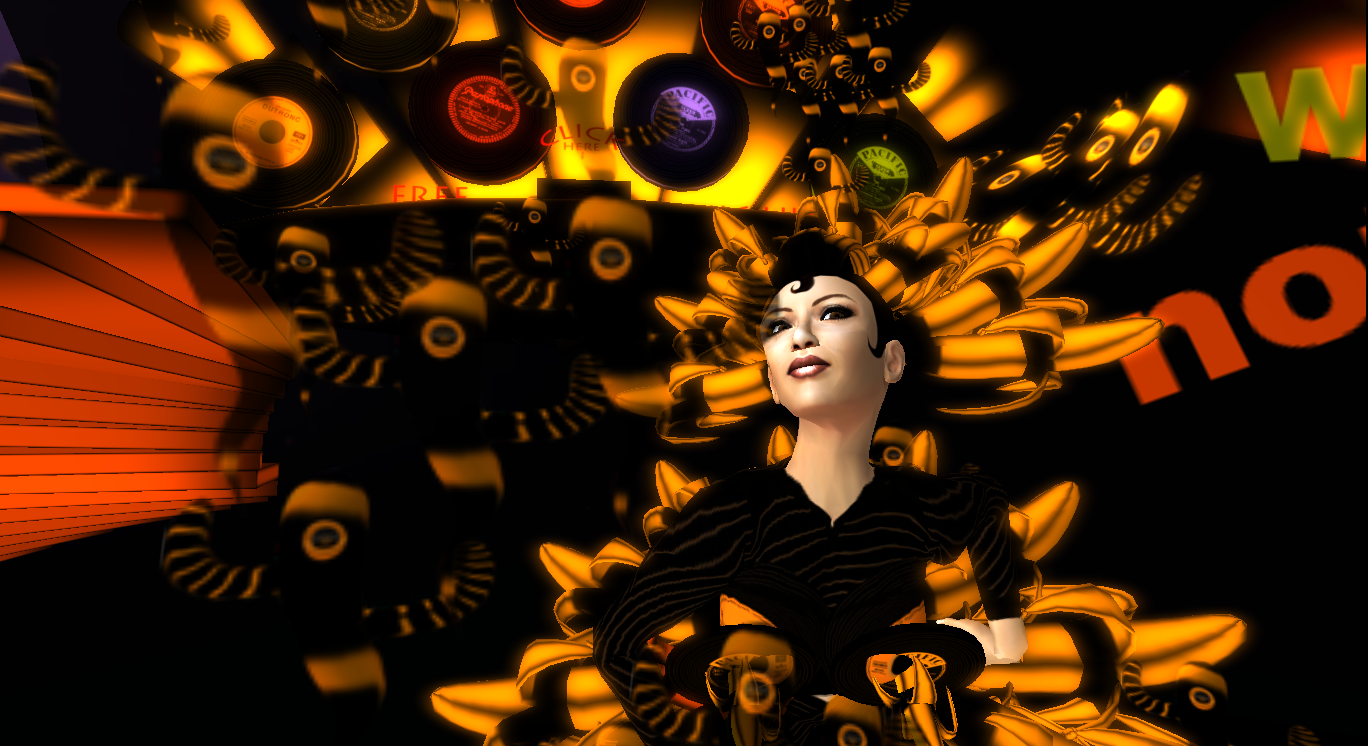 Dense. That's what it was. That's what I was, too, come to think about it, for not going back more often, for not reading all the material. Because there's always so much in a Maya Paris build.
Last night was the last night of Le Cactus on SBCC after an outstanding 2 years on the sim; this morning, there's just mist and Art Blue, still falling over dead drunk on a sky platform. But last night... Maya and Simotron Aquila (shown above) were dancing when we arrived, and together with Art Blue, cautious about putting on any attachments that might mess up his hair or teeth (teeth? he has attached teeth?) we were a group of five. 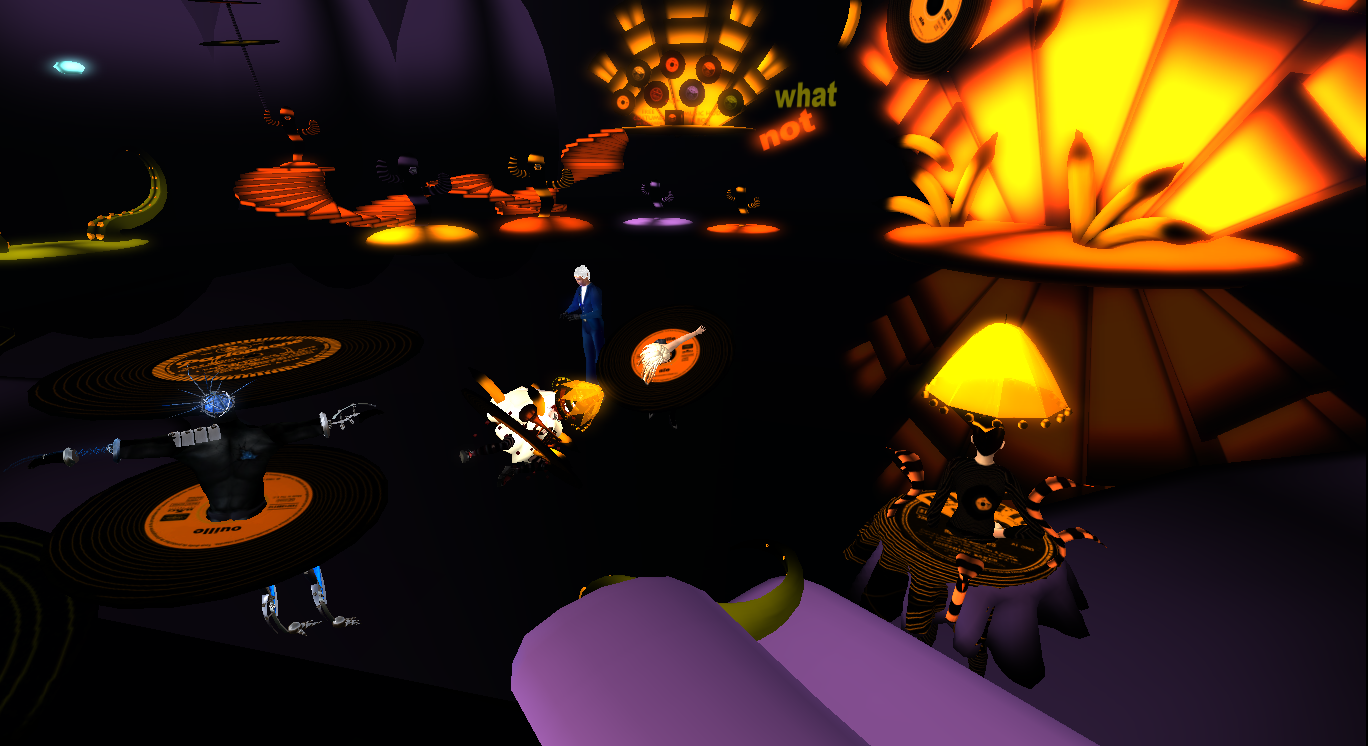 A few IMs soon put an end to that. Without exception, everyone contacted zoomed over - the words 'Maya Paris' were enough. The build was born to be a rollicking hullabaloo, and that's just how it was as one by one friends arrived, put on a record, and went bananas.

Around the black vinyl dance floor were ranged a number of platforms and perches, where you could be swept up in crazy dances and particles. Among the party-goers were art wearers, like Eupalinos Ugajin who look his elephant for a ride on the Banana wheel.... 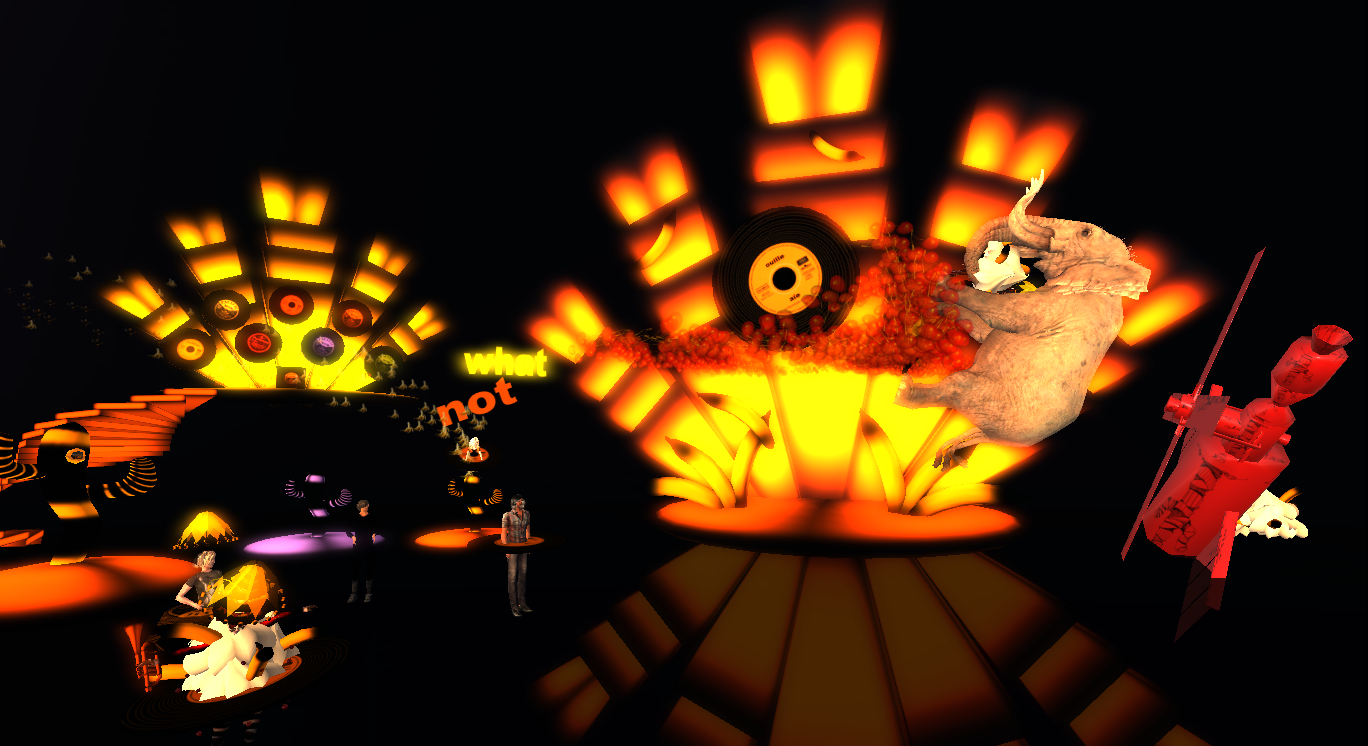 and showed us his dinosaur...

...and Kikas Babenco, who brought a window onto the record stand

In this whirling wonderland, perhaps none of us took the time to check out the HUD and watch the two fascinating documentaries on YouTube, one about Josephine Baker and one about Valaida Snow the two remarkable women who inspired, in part, this build. One must say 'in part', because this is a series of surreal moves that those two fantastic ladies might have loved, but surely could never have imagined. It takes a powerful leaping creativity to reach these heights, these curves, these fancies. In this Maya is surely unmatched in any art milieu for her eye for detail, and the multiple levels on which her work can be enjoyed. 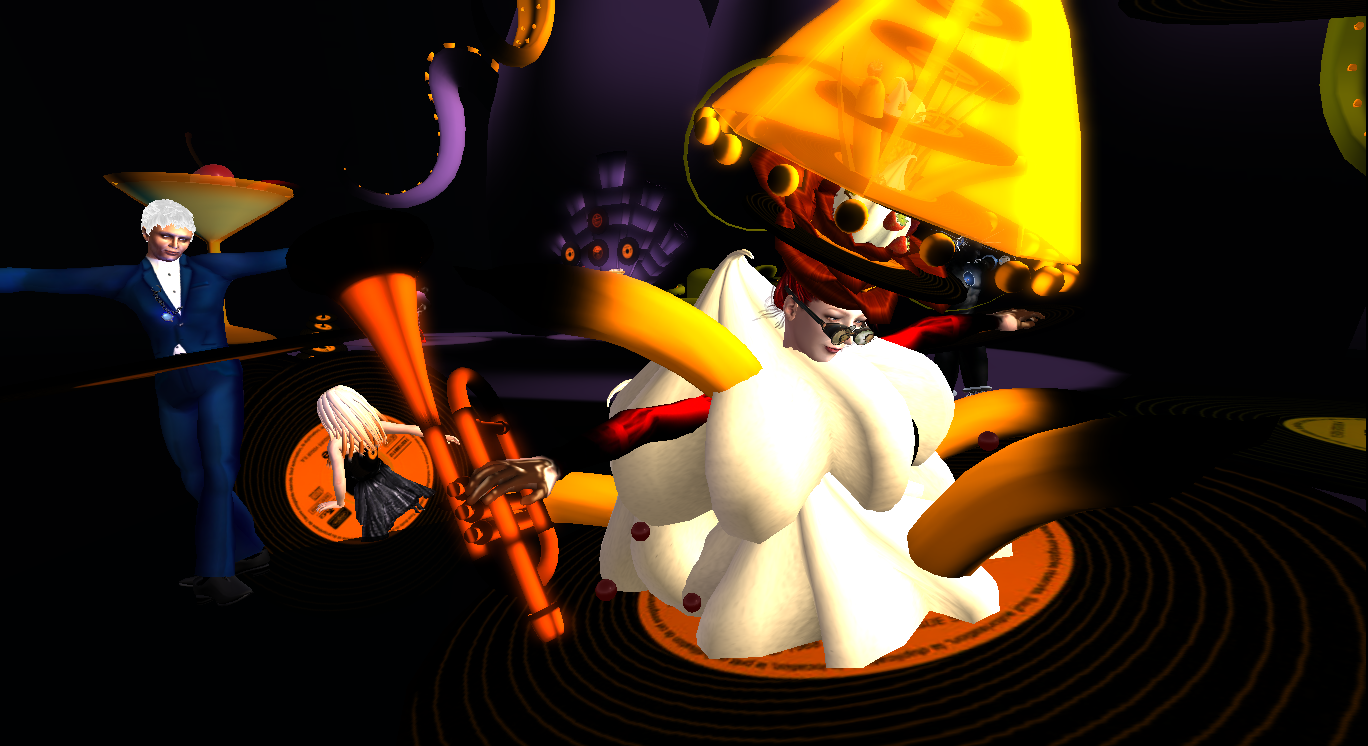 In the cold light of this morning, I returned to find that yes, Le Cactus was no more, and only Art Blue continued to wobble and wheel on the bare sky platform. Watching the two documentaries was like reading a book about a place where you went on holiday, or in a dream. 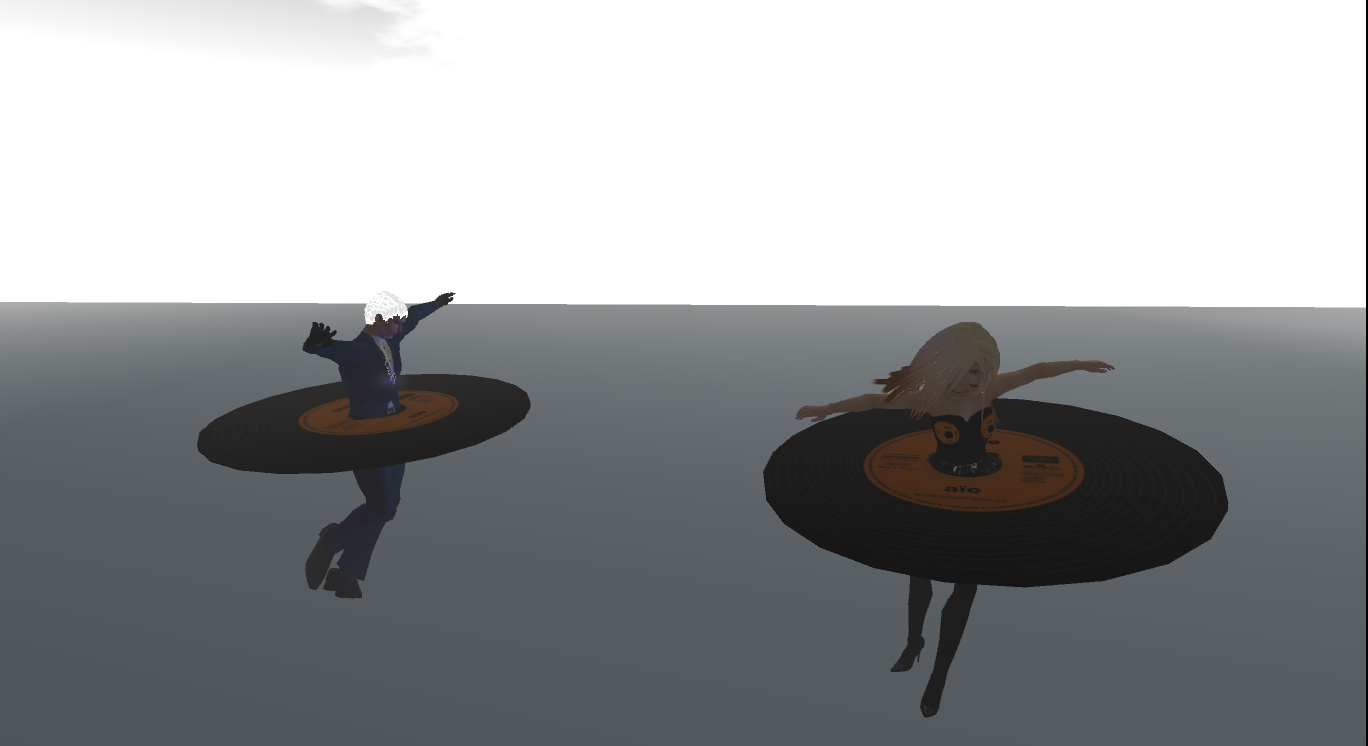 Suddenly it all makes more sense, and your memories are enriched by getting a bit of the backstory.  But on the night, on this last night of Le Cactus, Maya's genius was all color and movement and light. Her depths are like the ocean, we sail gleefully across the glinting surface that would not be there, were it not for the dark waters below.

Email ThisBlogThis!Share to TwitterShare to FacebookShare to Pinterest
Posted by Thirza Ember at 3:51 AM Labels: Maya Paris
Newer Posts Older Posts Home
Subscribe to: Posts (Atom)
This blog is about the virtual world called Second Life, its people and places, where real ideas, imagination and fantasy come alive.
Google SecondLife if you want to join in the fun, however remember this: it may seem like a game, but it's no joke.