"I've seen things you people wouldn't believe.
Attack ships on fire off the shoulder of Orion.
I watched c-beams glitter in the dark near the Tannhauser Gate.
All those... moments will be lost... in time, like tears... in rain.
Time to die."
'Roy Batty', Blade Runner 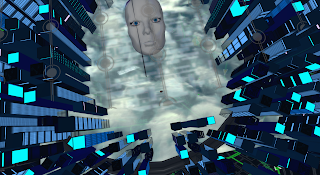 Noke Yuiza has been busy in SL. You may have seen her latest build, showcased at the Brera sim, and you won't be blamed if you think that she's all about the stage. It comes as no surprise to find that in her real life she has been both dancer and choreographer, and, perhaps most significantly, as a set painter in the theater. You probably saw her interesting take on Hoffmann's The Sandman, hosted at Arte Libera a while back. 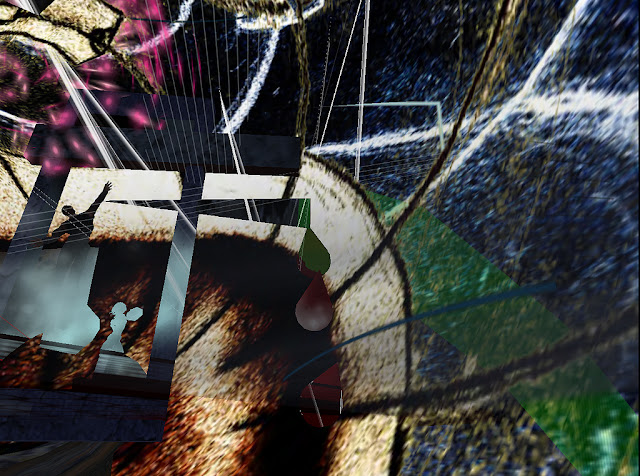 Noke's build takes to new heights the extreme conflation of real and virtual realities that's been the hallmark of Imparafacile Runo's work in SL / RL. Impa, as you know, has been running learning and cultural schemes in SL for ages. His group Libriamo Tutti is pure reality overlap. His able and talented team organize meetings where a RL audience, meeting in libraries in towns across Lombardy, can listen, see and participate alongside SL residents in literary evenings where books are discussed, read aloud, explained, and generally celebrated. Impa's longstanding friendship with Professor Giampiero Moioli of Milan's Brera Academy of Art, and a close collaboration with Simba Schumann, led to a recent RL seminar in which students were able to make a virtual field trip to three installations on the Brera sim. Each build is based on a literary work close to the artist's heart.

Email ThisBlogThis!Share to TwitterShare to FacebookShare to Pinterest
Posted by Thirza Ember at 7:20 AM Labels: art in second life, brera, imparafacile, italians in second life, libriamo tutti, literature in second life, noke yuiza, rosa montero
Newer Posts Older Posts Home
Subscribe to: Posts (Atom)
This blog is about the virtual world called Second Life, its people and places, where real ideas, imagination and fantasy come alive.
Google SecondLife if you want to join in the fun, however remember this: it may seem like a game, but it's no joke.