There is one thing less appealing than Russian avant garde art, and that is being bombarded with spam about Russian avant garde art. There's something very retro, about bombarding people with notices, it's a bit like the way TV shows used to have really long intros, with a theme song and all the credits. But time and the transmission of information is on a different footing now. People have quicker sensibilities. Less  has become more, and screaming for the attention of the masses will get you just, and only, that.
No time for that now. If you have been paying attention to what's going on in Flickr you  will know that Lollito Larkham has been working a great deal in Blender and related programs making interesting looking creatures and household goods and other stuff. 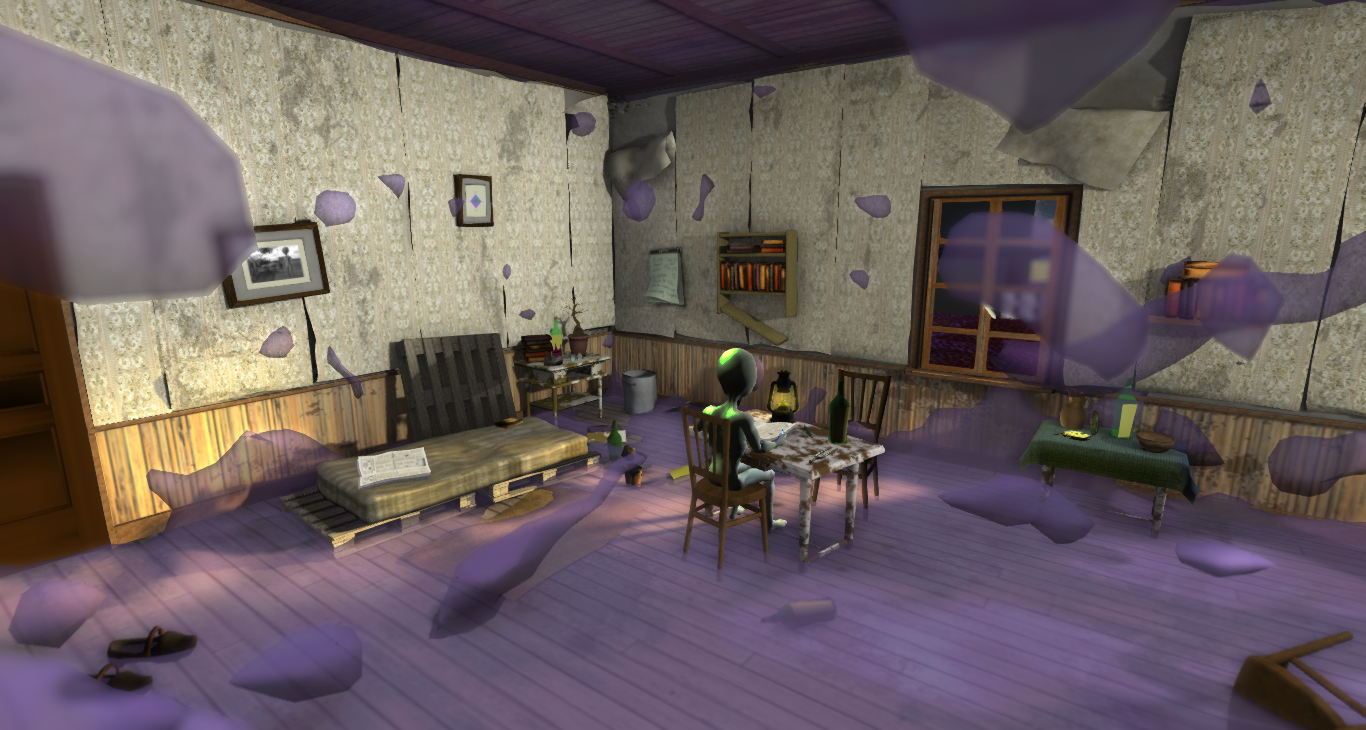 After seeing all his excellent photos, his event at  TKF  on sim Solaris promised well. The main attraction is certainly his Little Gray, a three dimensional morality tale which deplores prejudice. 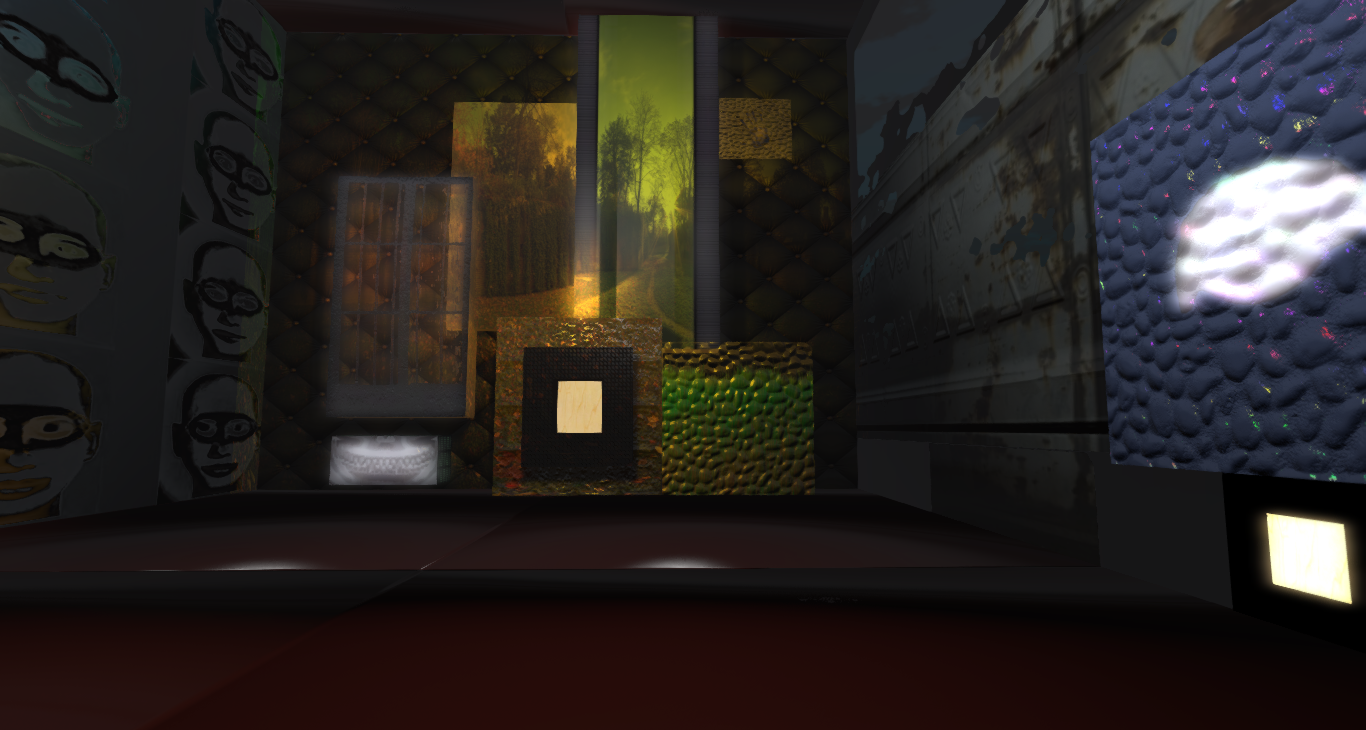 You're instructed at the landing point to set Midnight (no specific Windlight) before viewing the tableaux,  probably in an attempt to not have them clash with one another rather than to allow a story to unfold gradually, a technique used to great effect at the Singularity of Komiko, for example. 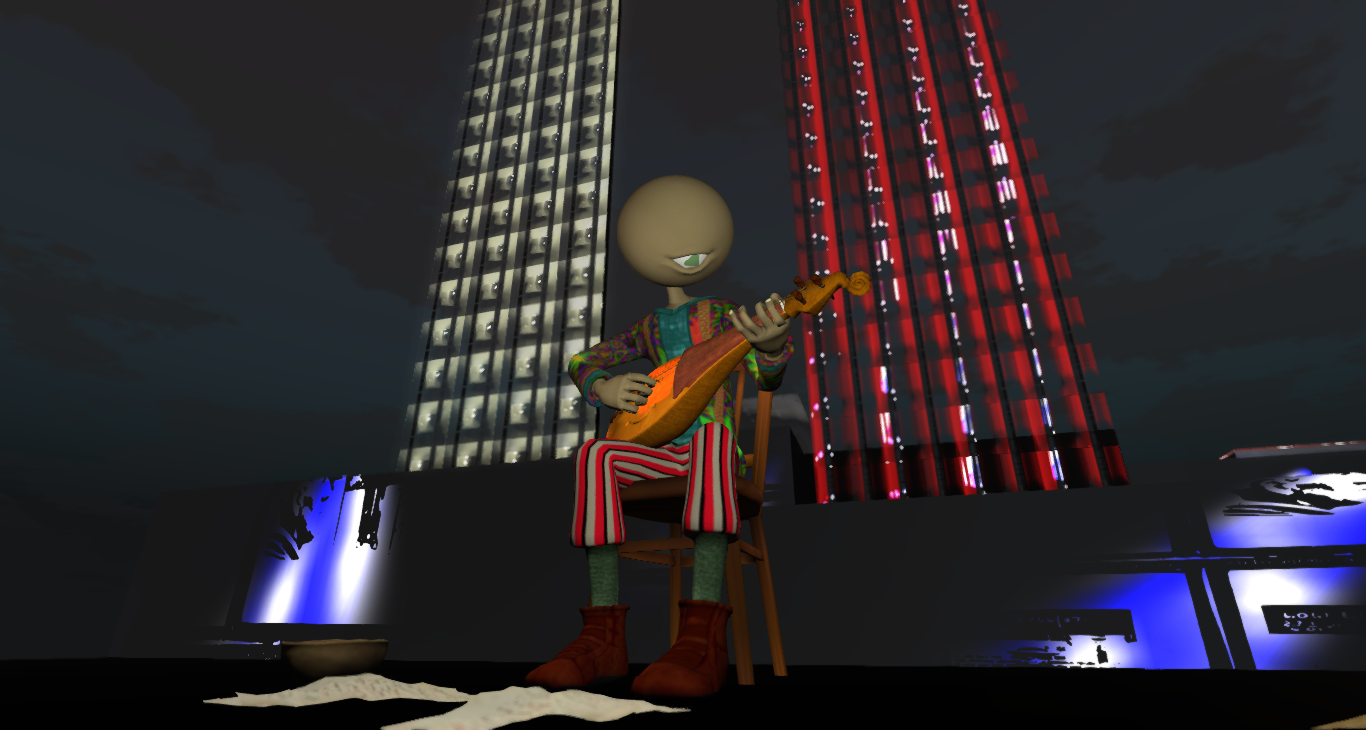 Perhaps that similarity raises expectations to unreasonably high levels, for the overall effect of the exhibits leans more toward the feeling of slightly rushed garage sale than it does thoroughly elaborated narrative. The mesh is cute, though, and a moderate amount of fun can be had in spotting pieces like the pitchfork that had their first public outing on Flickr.  Perhaps its greatest virtue is that the layout feels like genuinely new work, rather than familiar old builds refurbished with Cyrillic script, which seems by all accounts to be in vogue this week. 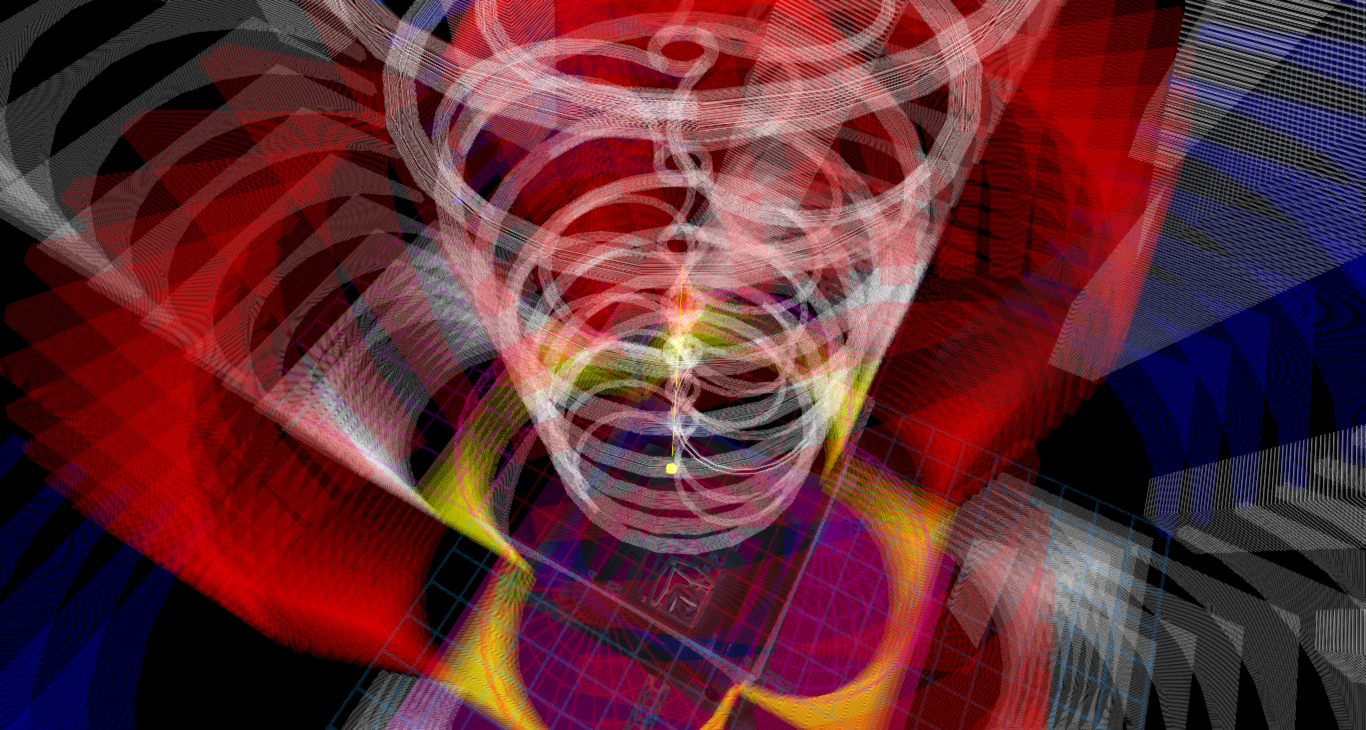 If Lollito's work on this occasion betrays an attempt to place somewhat random creations in a context homogeneous enough to be acceptable for an art show, the new installation at LEA 15 by Solkide Auer is a complete contrast.
From the giant alarm clock pictured at the beginning of this post, to the musical clefs spilling down like grains of sand on the massive metronome, Solkide captures not time itself, but its keepers in monumental forms and blazing rainbow colors.
A thrilling sim-sized, skyscraping cage does its darndest to hold our oldest enemy in place with fast chains or girders, and we are invited to visit the build in a classic scripted buggy, itself a time keeper, as its hover text reminds us of how many visitors have taken a ride on board since 2013. Meditate, gente. And yes, those are pyjamas. That kind of a day.

It is called TimeWalker, but there's no walking, not a lot of sound except for some ticking in the distance, but that might have been my watch. The rest is silence, Auer declares in his brilliantly brief notecard, but it is not the silence Hamlet was referring to that we find here, the silence of a place without time, the grave. We are instead interstitial features in a great conglomeration of cogs and gears, whirling between them unscathed, miraculously close to colorful flywheels that spin free of springs and pour down from impossible heights. Here the darkness is not a merciful mask separating sections of the install, but rather the blackness of space, stretching out and becoming one with time, leaving us to wonder how much space, how much time there is out there, and in here, inside our own heart and mind.
The TimeWalker opens tomorrow.   это очень хорошо 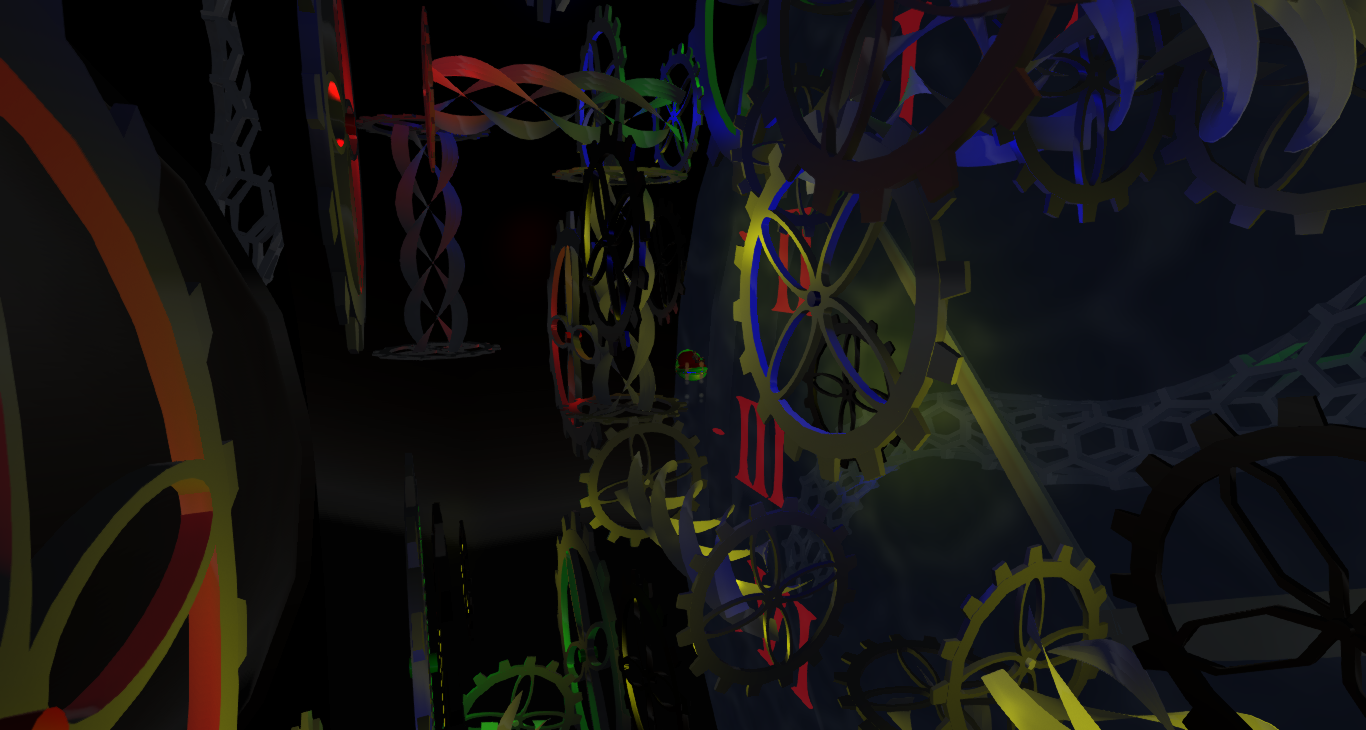 In 975, the mind of many a Wessex nobleman was exercised by the increasing wealth and influence of the Benedictine monasteries and a quarrel between the great lords Aelfthere and Aethelwine. Civil War was in the air. St Dunstan, who had been himself a monk and later Abbot of Glastonbury and was now Archbishop of Canterbury, had allied himself closely with Edgar of Wessex and indeed it was Dunstan who devised the coronation ceremony (still essentially used to this day) full of mystical imperialism, which moved other monarchs of Britain to pledge allegiance to Edgar, King of the West Saxons. The achievement was short-lived. After only two years Edgar died, leaving his teenage son Edward (born, some say, of an illicit relationship with Aethelflaed, the 'White Duck', cloistered away in the nunnery at nearby Shaftesbury) to take the throne.
The succession was anathema to Edward's stepmother Aelfthrith who naturally favored her own boy, Ethelred, later to prove himself 'Unready' (meaning 'without good advice'). For the next three years Aelfthrith plotted Edward's downfall. And so it was that in 975 AD after a reign of little more than a thousand days, King Edward, not yet seventeen, was lured under mysterious circumstances to the castle at Corfe, a Saxon word meaning 'gap', and there met his death. 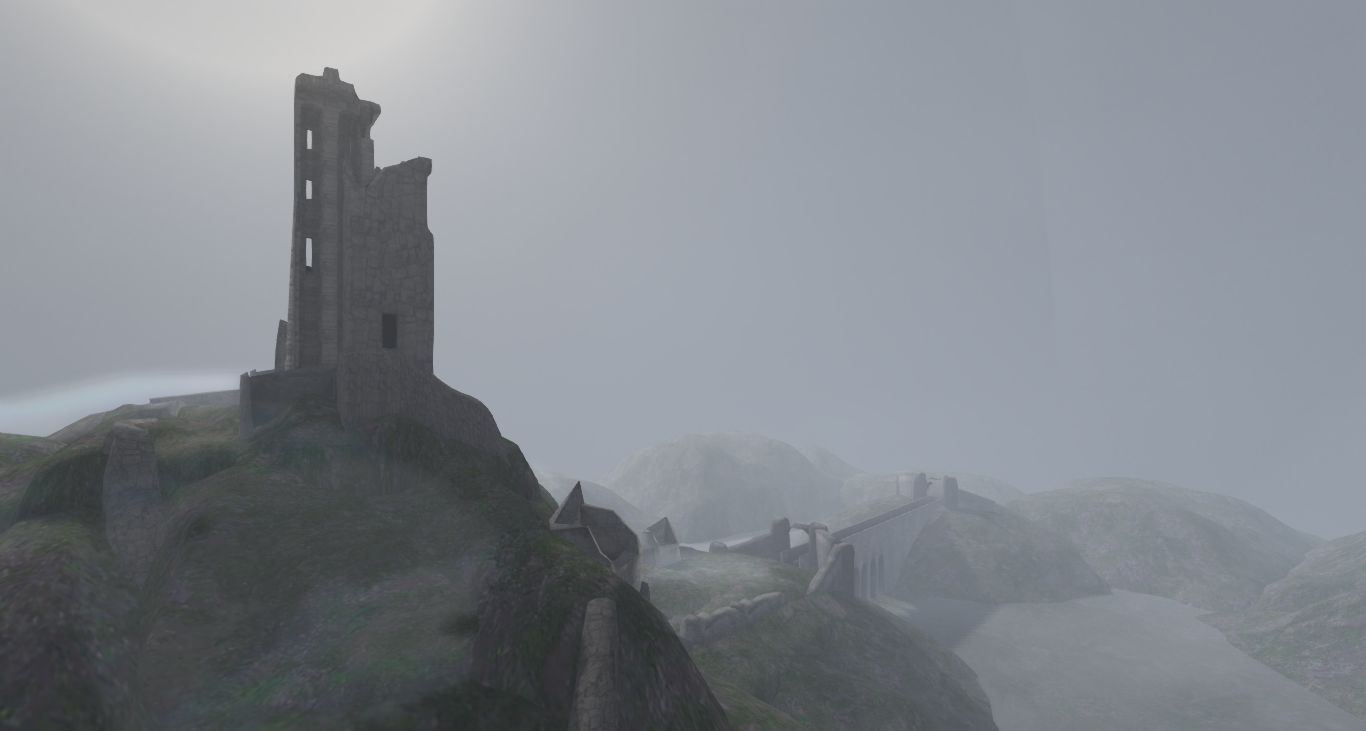 It is a place of ghosts.

Email ThisBlogThis!Share to TwitterShare to FacebookShare to Pinterest
Posted by Thirza Ember at 2:24 AM Labels: 3d art, art in second life, castles in second life, corfe, corfe castle, fuschia nightfire, nina camplin, saveme oh, Tanalois
Newer Posts Older Posts Home
Subscribe to: Posts (Atom)
This blog is about the virtual world called Second Life, its people and places, where real ideas, imagination and fantasy come alive.
Google SecondLife if you want to join in the fun, however remember this: it may seem like a game, but it's no joke.