If you trap lightning in a bottle, is it still lightning? Man Michinaga would probably say no. The academic and artist Patrick Lichty has been researching and making art in virtual reality for over twenty years now, and is probably best known in SL for his work with the Odyssey group. They use the sim to put on performances, like this one, Dido's Lament but the region risks extinction later this year through lack of funding - they're paying the Lindens a whopping three hundred bucks a MONTH to stay open! (how can that make any sense when you can get a Zetamex hypergrid enabled region for three bucks? *shakes head*) Anyway, Patrick's entry to SL is an interesting and erudite variant on the common theme.
Patrick Lichty: About 9 of us were interested in doing performance art in Second Life based on what Marina Abramovic did in 2005 with her Seven Easy Pieces decontextualization of performance art into the Guggenheim, and then our friends' Eva and Franco Mattes' further decontextualization of performance by taking the flesh and blood out of it in their Synthetic Performances in 2006. Around then, Jeremy Turner, Doug Jarvis, Scott Kildall, Liz Solo and I though all of this was a bit absurd and we formed Second Front as I was building The BitFactory, an art center that gave rise to Odyssey.  We thought that from our previous work, this seemed like Dada performance, so let's explore the absurdity of the whole thing a bit. Jeremy also convinced me that 27,000 early adopters online at any one time was a solid audience, although a lot of my work had been anti-capitalist, and I had misgivings about SL's economic underpinnings. So, instead of just trying to restage performances here, we wanted to try to, as David Antin would put it, explore the "distinctive features of the medium".

To watch Synthetic Performance on YouTube in 2014 is a chastening reminder of how, in the intensity of the virtual moment, you could stop noticing the poor animations and cheap appearance of yourself and other avatars back in the day. Is it possible  Or to rediscover that level of engagement, after years of SL? Or to get beyond it? The giggling RL audience suggests maybe not. It is always tricky with Performance Art to know if 'not very good' is just a lack of talent/expertise on the part of those producing or performing the work, or if it is meant as a statement; in the case of the camera work on this machinima, I have to go with the former. The serendipity of glitches and improvisation is what makes each piece unique, but unless you subscribe to the Conspiracy of Mediocrity, you'll admit that not everything unique is worth looking at. But it was a long time ago, and must be viewed in the light of the wooden scratchy transmissions of early television, stripped by time of the thunderbolt effect of exciting novelty.
Patrick Lichty: In 2006, logistics were a nightmare - asset server performance was a nightmare, teleports were impossible to cue, and lag was ridiculous, let alone crashing a sim pretty easily. So we relied on process and what John Cage called aleatoric principles, or chance operations. I mean, Mozart did musical experiments with dice. In short, we created a script that was the barest skeleton of a scenario, went on skype off-channel to converse while performing and watch as things often fell apart. We created a lot of "square lakes".
Perhaps you're thinking: Second Front on a par with Mozart seems a bit of an overstatement. Every performer, from a dad reading a bedtime story to his child on up, occasionally has to weave unexpected interruptions into an unrepeatable entertainment. But you know what he means. And that inescapable sensation of retro about Second Front may simply be a way of paring down the externals, even the reference in Dido's Lament to Cicciolina, rather than Mara Carfagna who took over as Italy's premiere political bimbo almost a decade ago, may be a nod in the direction of North American general knowledge. Clinging to SL when so many artists have found better or at least second homes in art loving grids like Metropolis or Pgrid may simply be a case of being too busy to see how virtual worlds are opening up, and yet all of this seems to reveal Lichty's ability to get his audience to enter that hall of mirrors that is a meditaion on perception, inviting them to ponder on the layers of meaning inside the phrase 'You just had to be there.'
Synthetic Performance proved a motor for the eventual creation of Second Front, and their performances have been turned into (much better quality) machinima by Lichty, who dismisses them as being made simply for archival purposes, 'derivative' and often 'not following the same plot as the original performance'. 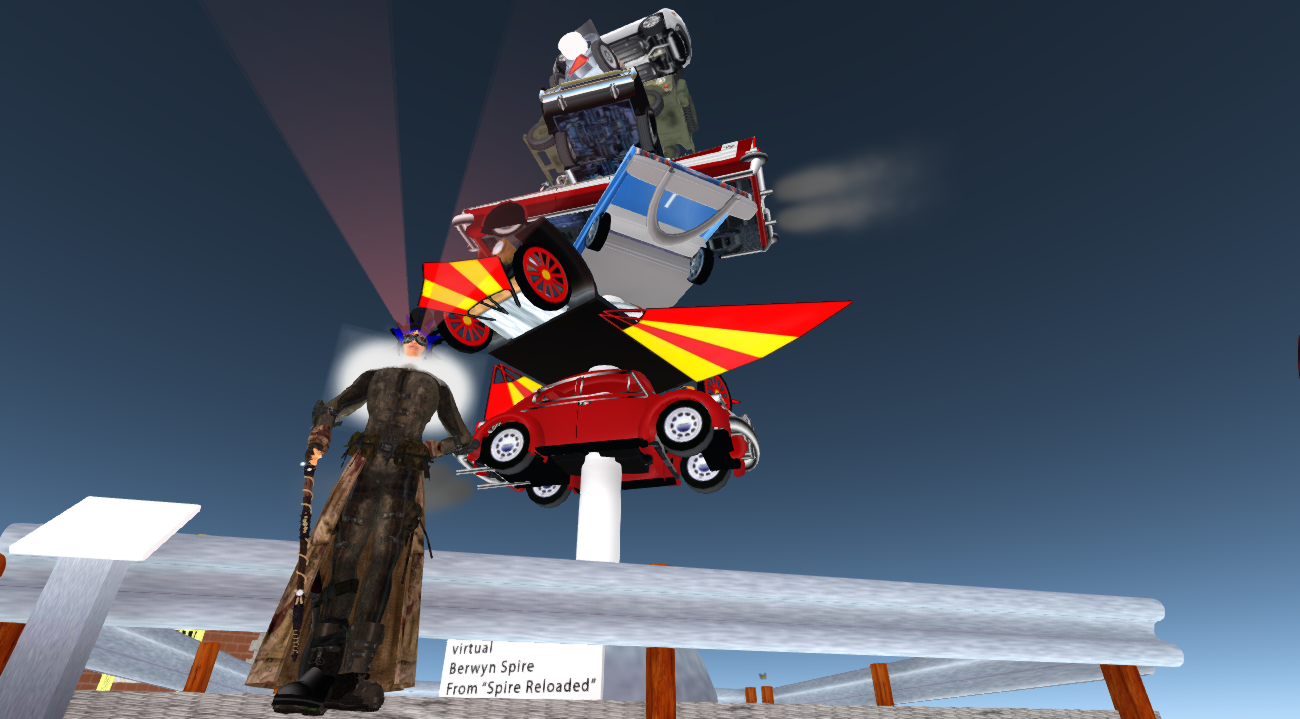 They remain, however, a link to the actual event, one that highlights the dichotomy at the heart of the performer. Does the audience matter, or for the purposes of Second Front, is the Happening an end in itself? From the start, that pool of 27k potential watchers was more like a stream of folks trickling through the virtual doors a few at a time, since they are living in different time zones around the world. Second Life has grown, and that reality has remained. A lot of performers use bots or alts of one kind or another in an attempt do reach people no matter when they are online. Is that a strategy Second Front uses?
Patrick Lichty: No. we're all live, every time, and if people don't see it, well. IMO bots aren't a performance; they're an installation. Most of the time we don't even announce our performances. Except when you have a really special event, performing in Second Life has a lot of the tree falling in the forest quality.
That tree in the forest quality has lent Patrick a reputation for being a bit of an SL curiosity. Part of you wonders why he calls himself a sim's nightmare, rather than taking a few seconds to turn his particles down to a more group friendly level, this being the author of Translation of Art in Virtual Worlds and the artist whose collection of QR code portraits  delighted those of us with smart phones with a glimpse into innovative cross-media representation. People want to come and take a look at him in the flesh, as it were, rather than popping in during a durational art performance, they wanted to say hi, even stand in his car, something he graciously accepted, taking a moment to point out one of Odyssey sim's attractions, the Spindle.

Patrick Lichty: The actual Spindle was in Berwyn, IL where I used to live, which is why it was in Wayne's World.
Liz Solo, long time collaborator and fellow Second Front member, whose mixed reality machinima "The Machine" comes out later this year, has nothing but praise for him as a friend and artist.
Liz Solo: I’ve been working with Patrick since 2007 and look forward to many more years of collaboration. Patrick is unnaturally prolific, a total badass (not really), a shit disturber (like me), and seems to me to be continuously producing.  He has introduced me to a kazillion new ideas, artists and techniques. The work we do together is usually spontaneous, timely, responsive and fun, playing with the boundaries of performance art and experimenting as artists. It is an adventure exploring virtual places with Patrick and our compadres in Second Front and other artist collectives. 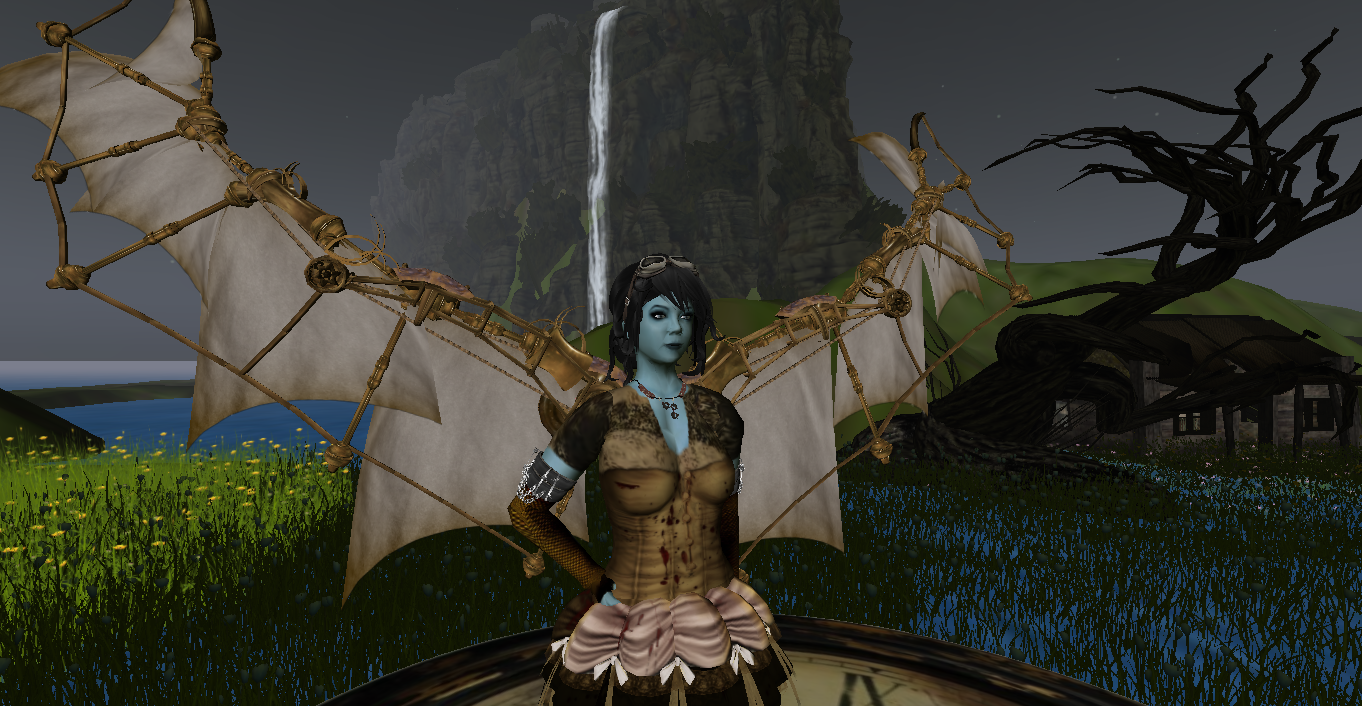 And for the future? His exploration of new media and transmedia art  shows no sign of slowing down. His track record of residencies, articles, activism, and machinima stands for itself.
Patrick Lichty: I have my solo work, my Second Front work, and the Virtual Fluxus work with SF and Bibbe Hansen.
They are talking about a possible move for Odyssey to Macgrid, if funding to keep the sim in SL alive does not materialize. There is  Patrick's Oxford handbook now out in print. And of course, there will be more performances.
Keep watching. Who knows what will be next.
0 comments

Email ThisBlogThis!Share to TwitterShare to FacebookShare to Pinterest
Posted by Thirza Ember at 8:58 AM Labels: liz solo, man michinaga, patrick lichty, second front, transmedia art
Newer Posts Older Posts Home
Subscribe to: Posts (Atom)
This blog is about the virtual world called Second Life, its people and places, where real ideas, imagination and fantasy come alive.
Google SecondLife if you want to join in the fun, however remember this: it may seem like a game, but it's no joke.