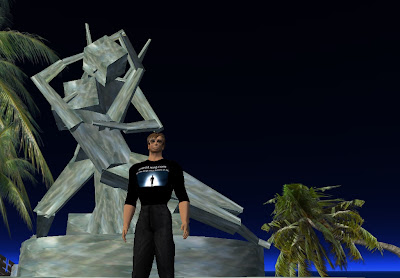 Meet Lion Igaly, artist, builder, gallery impresario, and all round good guy. Lion's often described as a tireless worker for his family of artists, some of them new, others well-known names in the SL art world, like Shellina Winkler, Gleman Jun and nessuno Myoo. Lion had only been in SL for a few days back in may of '07 and was in search as, he puts it, a 'reason for being in SL' when he noticed how many creative people were producing beautiful things but had nowhere to show their work. With a background in IT, building had been the first thing that drew him into the virutal world, in fact, he confessed to me that he had learnt how to make furniture before he figured out how to fly. Being the son of artists, and having also married an artist in RL, this area of our culture was the one that attracted him most and so quite naturally it occurred to him that this could be his mission in the metaverse, to put together a gallery and make exhibition spaces available, spaces that he thought about intensely before building, coming up with a design which is both functional and elegant, a literal showcase, which he called Piramide. The original building has undergone some changes, but that first construction, made in the sandbox at Secondlearning Italy, immediately became a place where many of his regular exhibitors within the group known as Orion Tales. Like Lion, many of his artists began their first experiments in primsqueezing in this very sandbox - you can see a photo down in the Italian part - and Lion stil regularly drops by to check out newcomers and invite some to put their work on show in his gallery. Secondlearning Italy is owned by an elearning company based in Florence, INDIRE and they eventually made available a space on the same sim for the Piramide gallery, just a few meters away from the place where it was first created. True to the spirit of italianate philanthropy, there are links and information boards designed specifically to help newbies through those first essential steps of grasping the fundamentals of SL. Lion has also created a teleport link to a number of other galleries, cementing the sense of alliance and community that are so important to his vision of the metaversal art world. 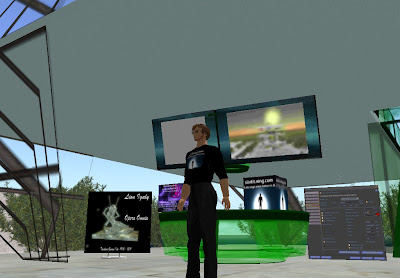 Lion's own home reveals his sentimental side, it's the first house he ever made and he has never really changed it, apart from adding art work, of course. Like a lot of people his first attempt were hampered by not really understanding tools - he subsequently attended some classes on the same Secondlearning sim - but considering this was a true newbie effort, the result is rather handsome. The showroom on the same same site is worth a visit, nowadays Lion makes particle effects, fireworks and fountains and thanks to the income from this, is able to fund much of his gallery work. He put on a fireworks show for me while we talked. 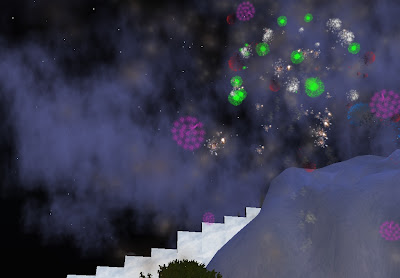 I wondered if it is difficult to keep everybody happy - artists and primcounts often can cause problems.
Lion Igaly: The first gallery quickly proved to be too small for all the artists and the pieces I wanted to show, so I got involved with another gallery, and found pieces of land to rent here and there. at one point I was running no less than four separate galleries. As far as prims are concerned, the temprezzer has really solved that problem. Any work that is more than 50 prims in size goes in a temprezzer, so no artist needs to feel he or she is limited by the primcount in the gallery or the size of other people's work. 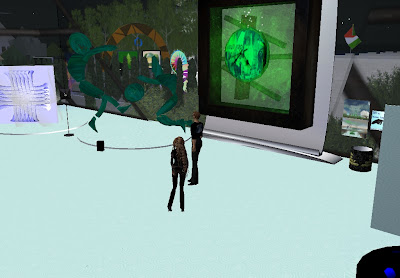 One of the most difficult aspects of running a gallery is finding appropriate and reliable sims on which to set up the gallery. The Diadem, my other gallery, was on two different sims, one of which disappeared in the night taking with it all the art, the hopes and the hard work involved in putting together an art show. This version of the Diadem was also on a sim where the owner appeared to have abandoned SL altogether, and in face just this week it also went to the bottom of the metaversal sea along with all our art. It's really frustrating when owners don't trouble over their tenants and their needs.

In his kindly manner, Lion often refers to his artists as 'ragazzi' or kids... I asked him why and he pointed out that SL has a rejuvenating effect on many participants: older people feel a new lease on life and a creativity that would not be thinkable in the hidebound lines of everyday life in the real world. He feels responsible for them, to some extent and that sense of community is very important to him, and when I asked him about the choices he makes among artists and art (I see an awful lot of genuinely horrible art in my wanderings, I can only imagine the stuff he must wade through) he gave me a very diplomatic answer, pointing out that the artists vision doesn't always transmit into the product they place before the public, and that in many cases it is a question of time and experience, not talent, that holds them back from showing something magnificent. He even managed to restore the reputation of the dreaded Slow Rotation Script, by pointing me in the direction of some magnificent sculptures that use it. Well, a little bit. I was really saddened to learn that the Diadem had disappeared, of course, we all know nothing in SL is forever, and the actual structure with its wonderful disappearing walls and floors, remains in Lion's inventory ready to be set up in its next home, but the work involved in reorganizing all the art, well, we're all familiar with the concept; those hours of care are gone for good, except that a trace remains in the appreciation his artists, his ragazzi have for Lion. 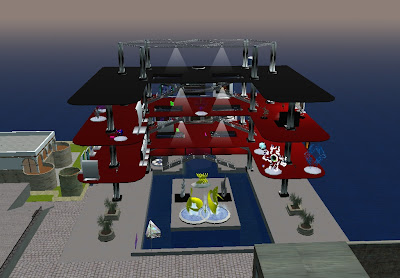 Lion Igaly: It's essential to keep moving forward. In my field, keeping updated with new techniques and improvements is the only way to survive: he who does not update is lost. I see SL as an intellectual challenge, much like a good book; if the mind is the only part of the body that never really sleeps, which is a great thing, since that constant striving for new developments and inspiration is what prevents boredom from setting in. One way I keep myself on the cutting edge is by running a course on particles. It's a free, two-part beginner's class in particles which has just been held at AdOpera, another Italian sim owned by Adamo Grau. Rather than simply presenting the same course over and over, I try to rethink it each time.
Lion is also an artist and the Tanalois gallery recently hosted a retrospective of his sculptures including the humourous Cubistic temptations on Love and Psyche of Canova shown at the top of this post, and a small but fascinating immersion piece called Electronic inside, there's a photo of it down below, which makes you feel like an electron, a tiny powerful force operating in a sea of dynamic energy, brilliant fascinating almost to the point of exhaustion a perfect metaphor for SL creatives. Check out all the photos from the show on his flickr page.
Lion Igaly: Of course, there are times when the daily grind involved in the business side of SL can be a bit tiresome, and like everyone I have my days when the prospect of coming inworld and dealing with it all is unappealing. But on the whole SL has brought me into contact with a community that I have been proud to serve, in my own small way. It has enriched my life. It's hard to imagine my life without the friendships have made here, close friends, partners in work and play; I never imagined this was possible before I came into SL, and now, I don't think I'd like to live without it.
Thirza Ember: So would you pixellate yourself if it were possible?
Lion Igaly: Well who knows? Now it looks like people are going to live to be well over a hundred years old, who can say what the future might bring? And perhaps it wouldn't be a bad life, as long as the lag stayed at a minimum. It might be a fine life...at least until the first systemwide failure at Linden Labs... 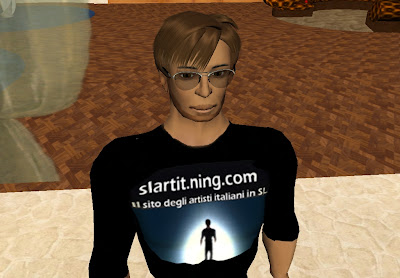 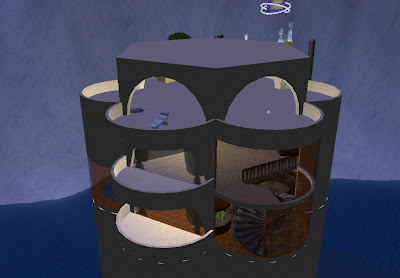 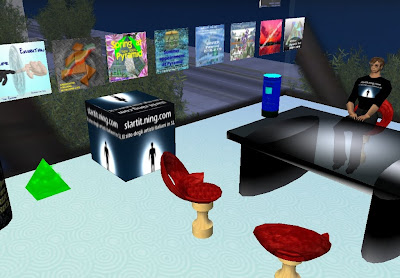 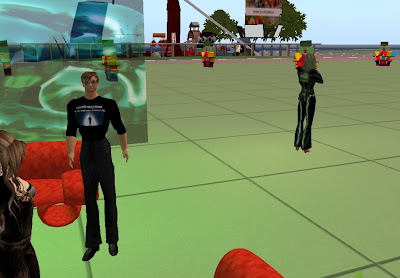 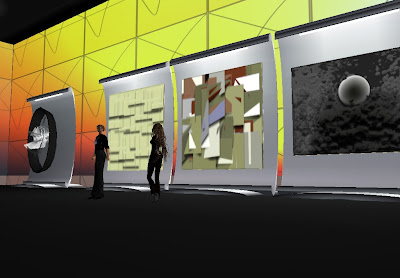 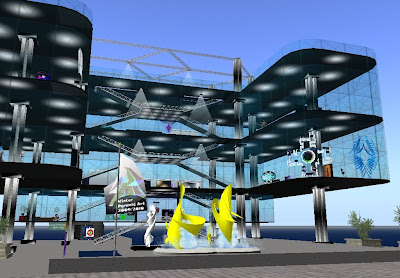 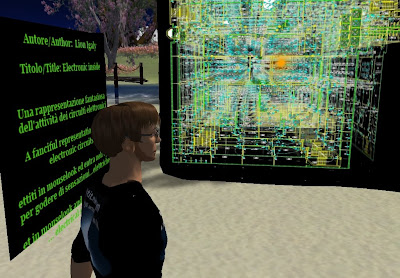 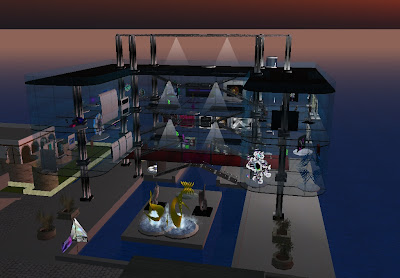 I thank you thirza for your valuable interview