Tournicoton, the French art Gallery on sim Metaversel, is closing this week, closing its doors for good. It's just too expensive, says Mariaka Nishi, who cofounded the artistic venue back in 2007 alongside her RL partner, Naastik Rau. To mark the end of an era, and to let people know that she's still fervently involved in VW art, she has organized one last show, Welcoming Woman, set for this Tuesday evening, French time (that's 12.30 SLT on September 25th). It's going to be a double event, held in Voice, held on both SL and Francogrid - the sims have the same name, Metaversel. Here's Mariaka, FG version, busy preparing the Francogrid side of the double show. 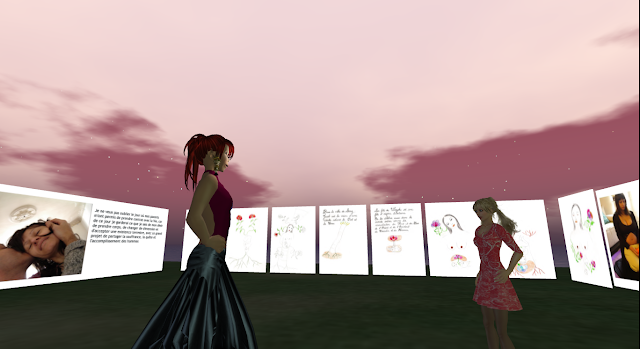 Why this departure from Second Life? It's just too expensive, in that it's about 290 euros a month to run a sim, so that even with a bit of help from others, it's just not worth it, especially as now they get less and less use out of it, as they spend more and more time on the beautiful, stable, and vibrant Francogrid. She has also allowed her son Louka free range, on an adjoining sim,

Email ThisBlogThis!Share to TwitterShare to FacebookShare to Pinterest
Posted by Thirza Ember at 8:20 AM Labels: anne astier, art in francogrid, motherhood in virtual worlds, tournicoton

In an hour or so, there's fun and dancing at the State Fair - wait, no, no pigs or pies competing, not this time, it's the Virtual State Fair Art Gallery run by Thynka Little and, in a lesser, none-of-my-business kind of a way, DFox Spitteler. Going by the IMs. Voting ends at 8 pm SLT  tonight. 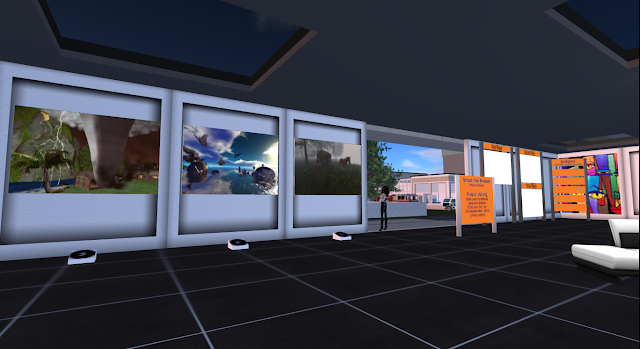 The competition is interesting, not so much by the standard of  the art on show, which is nice - the theme is weather in SL, most people have gone with rain, or tornadoes - wow - but even more so for the fact that the organizers actively encourage, in the Notecard, the use of the dreaded Friend's Vote (though they draw the line at bots and groups).
It may seem a bit naughty, getting your friends over, but it's a nice way of meeting new people, and being hit

Email ThisBlogThis!Share to TwitterShare to FacebookShare to Pinterest
Posted by Thirza Ember at 4:52 PM

Earlier this summer,with her install 'Destruction', Asmita Duranaya challenged artists and builders to come up with a modern fable. 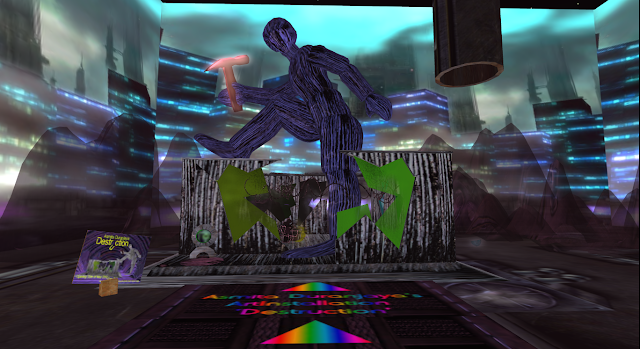 The result, or at least the top of the iceberg, from a creative point of view, was unveiled last night at Space4Art in the form of the winning entry, 'Fleeting Captivities' by Lilia Artis and Haveit Neox. 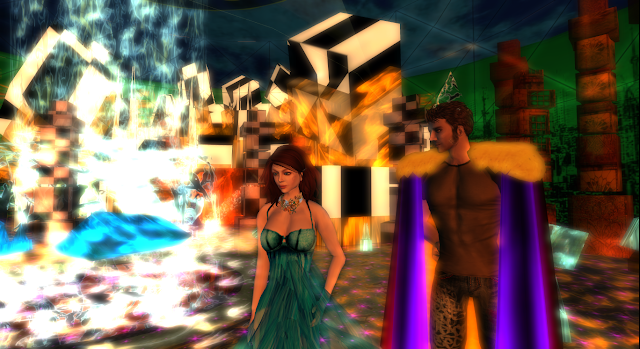 This lovely construct is a 3D interpretation of their charming morality tale which exudes all the best values of Second Life, impossible climactic conditions, bridges over infinity, and unexpected friendships in the face of adversity. It's a must read, and if you do nothing else, TP over to and pick up a copy. But no, hang around a little longer on the sim, and try out Asmita's Destruction word-game-with-a-message. Looks like sinister fun.
Center stage is the build by Haveit and Lilia, who took their tale and fitted it into quite literally a 'space for art'. last night was the dance-filled vernissage, and Lilia read the story out in both German and English. She has a clear, bright delightful reading voice. It was like a sort of bizarro crap mariner event, put it that way.

Email ThisBlogThis!Share to TwitterShare to FacebookShare to Pinterest
Posted by Thirza Ember at 8:17 AM Labels: art in second life, ArtsParks, asmita duranjaya, haveit neox, lilia artis, original stories in second life, space4art
Newer Posts Older Posts Home
Subscribe to: Posts (Atom)
This blog is about the virtual world called Second Life, its people and places, where real ideas, imagination and fantasy come alive.
Google SecondLife if you want to join in the fun, however remember this: it may seem like a game, but it's no joke.