Why film Second Life?
I asked a bunch of people.
There's more than one reason. I'd just been to the spectacular RL Museo del Cinema,  which is why movies were on my mind, but it seems that everybody's at it, independently and via SL groups as undiverse as the Phantasmagoria and the UWA, the LEA and the SL Machinima Guild. Fuschia was at romy Nader's new build, so she's up first.
Fuschia Nightfire: I think every kind of art has its place, but machinima tells a story more than just a picture. It's also great for recording installations. Imagine if you wanted to record this build. Taking photos just wouldn't portray it.  I've only been making machinima for about a year, but I enjoy it - here's my Youtube channel if you want to look. 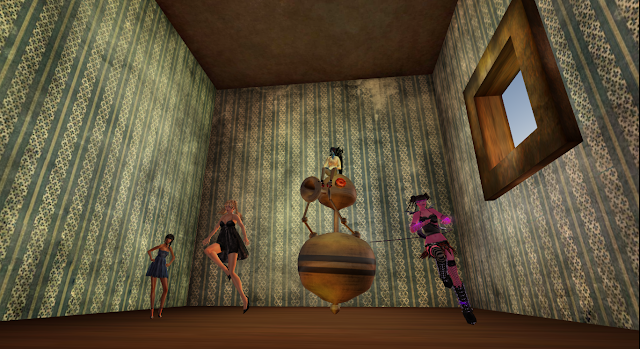 She's not wrong about the photo, is she? check out the spooky-cool dancing for yourself at MetaLES.

Email ThisBlogThis!Share to TwitterShare to FacebookShare to Pinterest
Posted by Thirza Ember at 7:25 PM Labels: celestial elf, chantal harvey, film in sl, fuschia nightfire, machinima in sl, moya patrick, short film
Newer Posts Older Posts Home
Subscribe to: Posts (Atom)
This blog is about the virtual world called Second Life, its people and places, where real ideas, imagination and fantasy come alive.
Google SecondLife if you want to join in the fun, however remember this: it may seem like a game, but it's no joke.