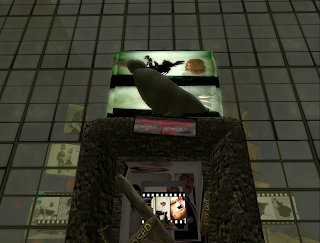 Suppose none of it is real. Robin Moore's new build Playground of Love, which opens at Arte Libera on March 3rd, shows romance as a fun fair, yet wonders about both - the fun, and the fairness. Hearts don't do virtual, they just are, and this thoughtful install, built in collaboration with Prajna Seetan, runs rings around ideas of commitment, seduction, trust, and change. 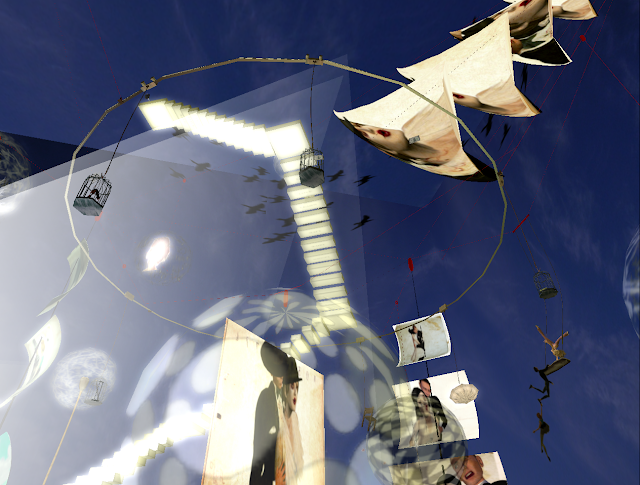 Love as a merry-go-round; a Heath-Robinson build - Storm P machines, to Danes like Robin - it is full of poses and moving parts, none of which take you anywhere except back to yourself again; even the stairs, with their embossed promise of  'Love, Live, Learn', lead into a sky from which the birds have flown, leaving only their shadows, and an empty moon. This is no fairy-tale romance, but a reminder that, unlike our intentions, all we have done is a memory somewhere, and actions have a way of running full circle. 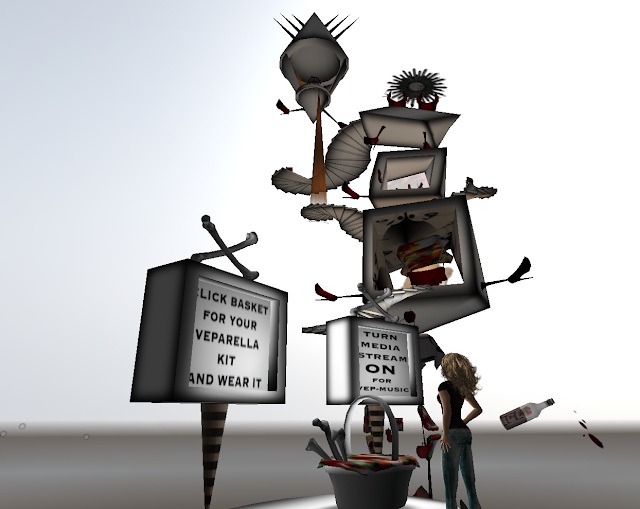 Meanwhile, at Maya Paris' Veparella, fairy tales have been stitched together seamlessly, from Rapunzel to Red Riding Hood. 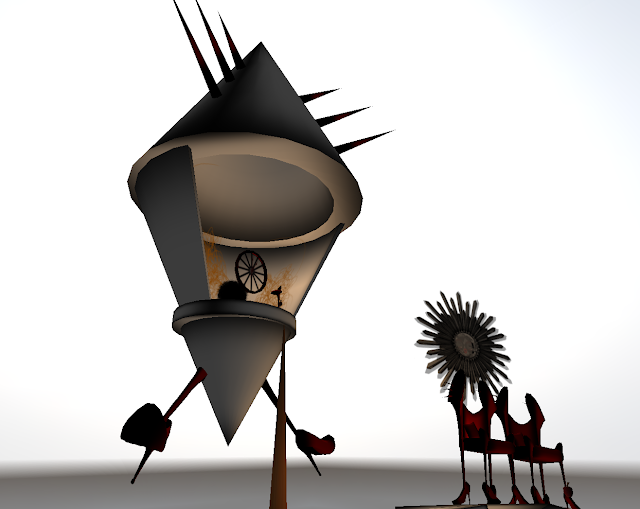 choosing, spiralling upward; suppose you can be all the Princesses of the story books. Find them for yourself. 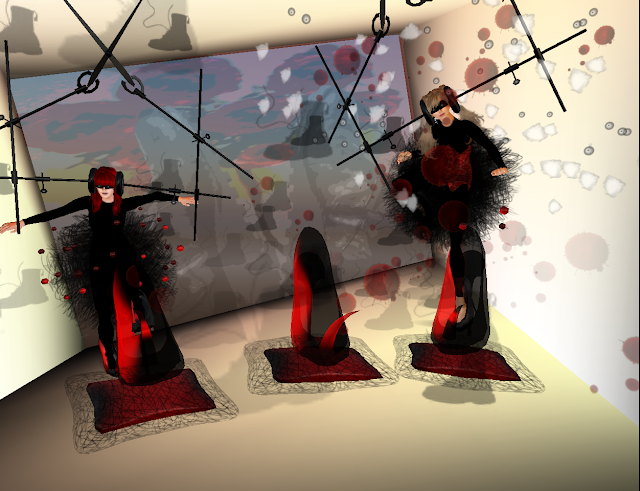 If Playground of Love explodes the myth of real commitment in virtual relationships, it does so with bland serenity. It's all a game, where you come to please yourself, living the moment, confident that nothing and no-one around you has more substance than their pixels, so no harm done. Snapped memories float down gently, cushioning even the heavy hammer in one corner. Nothing matters, it's all happened before, and will again. 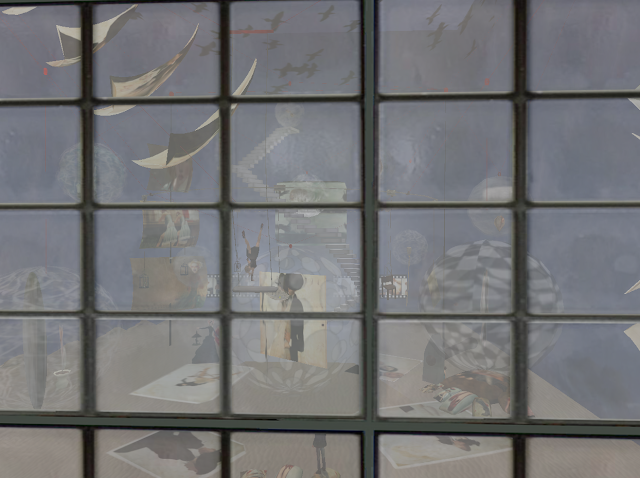 Veparella suggests consequences somewhat spikier than that, one would suppose.
A classic tale. 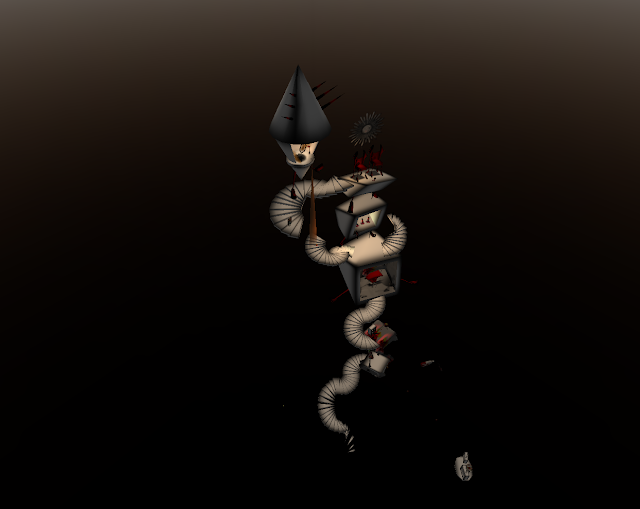 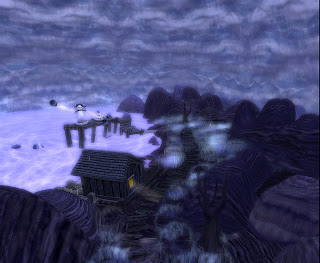 Email ThisBlogThis!Share to TwitterShare to FacebookShare to Pinterest
Posted by Thirza Ember at 9:42 AM Labels: originalia, scottius polke, the blue place

Bitchy little cliques, money-grubbing hacks and opening night lag are three hallmarks of the SL art scene, but of course, there's much more to it than that! For example, there is the Artist's Statement. Nothing short of a meshnami will resolve the problem of the former, but the latter is a different matter.
As he slipped a commission script into each of your masterpieces, your friendly gallery owner probably told you that writing an Artist's Statement is 'How To Sell Your Stuff 101' in all worlds, virtual or not. He's right, of course, but that doesn't mean you have to make a fool of yourself while attempting to rake in the Lindens.
Three things.
Show you're brief.
If your statement does not fit in the default window of a new notecard, it's tooo freeeeaking loooong! Less is more, more opportunities for people to ask questions and start a dialogue, more chance  your note will be read  and remembered, which is what you were hoping for, right?
Self proclamations
Delusions of grandeur are a lot like farts. We all get them sometimes, but good manners dictate that you avoid sharing them with others. If you can't get over yourself, then try to fake it. Don't write 'Brilliant painter, sculptor, poet, this, that, and the other, plus I am in a band'. First of all, you're not that brilliant. You're talented at one thing, fairly good at a couple of others, and the rest is kindhearted people lying to your face. (Almost certainly about the poetry.) Second of all, if  you are a Renaissance genius (and again, let me stress that you're not), have the grace to let us figure it out for ourselves.
Listmania
You know that complete list of every show you've ever participated in, the one that proves you're a sought-after, experienced, happening artist? Yeah - we don't want to see it. Much better to state the number of shows you've been in, mention a few of your most impressive outings, and offer a 'full list available on request'. The same applies to the dreaded 'Influences' section - we can't see the mood for the trends when the list of your art heroes exceeds eight or ten people. Mix it up a bit. Add links to the names you drop.

The fee for this advice is 500L each. Feel free to tip me inworld. No equivalent-value art, please.
3 comments

Email ThisBlogThis!Share to TwitterShare to FacebookShare to Pinterest
Posted by Thirza Ember at 9:50 AM 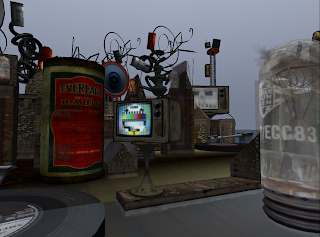 It seems like a lost town, a HiFi wilderness of circuits mysteriously broadcasting, and old signals leaking out of valves and scratchy needles. The little girl in the Test Card shivers a blank smile across the decades. There is nothing on TV... or is there? Are we just on the wrong wavelength, would a touch of the dial make it all spring to life? Among the shadow-filled carcasses of old speaker cabinets, the wire in the voice coil sings a hissing song of rare earth returning to earth, and the ghost of life and light glows in the valve glass darkly. Full of gaps and static, this is a whispering temple  to the age of analog, a far cry from the pure sound of the digital, poles apart, like the difference between teleporting and walking. The modern journey of sound has been truncated, perfected, but here among the hiss and scratches, we are reminded that in all refinement there is loss, that getting there is half the fun, and that is perhaps what makes us human. 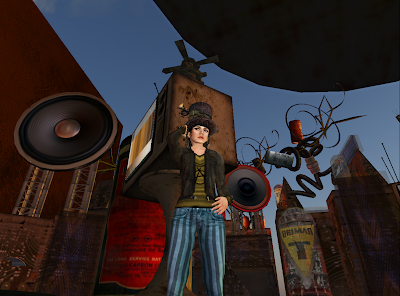 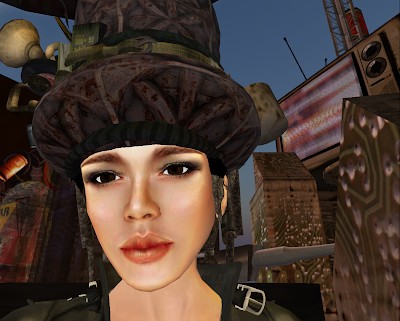 oona Eiren: Valve amps have the sweetest sound. I like to use lots of scratch in my sound work. Digital seems to want to do the opposite, to clean sound. The inspiration for this build was some vintage Hi Fi record players and TVs. They have history. I have records that jump in the same place they did when I was growing up, I love it, and old cassettes have it as well, they get stretched and warp.  I have software that's very good, but it all begins with hands on recording. 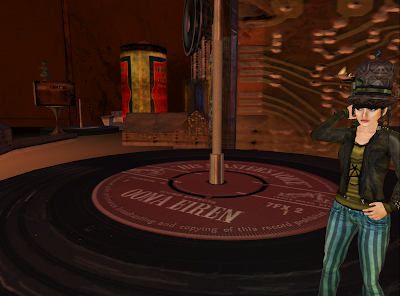 Oona jumped at the opportunity to exhibit at Splitscreen, a space she's sharing this time around with Misprint Thursday's  install White Sheets. It was a great opportunity for oona to try her hand at a bigger build, and over four weeks, the radio and televisual ensemble came together, both visually and with improvised sounds, starting with an image of an old TV and a ten second loop of sound that she recorded while out walking. As you move around the build, touch the objects and listen to their sounds.
oona Eiren: In RL I sometimes do illusration work, but work more with sound making installations and working with dance companys - and then theres a bit of film making thrown into the mix! My next move in SL is to try machinima. I've been playing with that a bit, it's fantastic, to build sets like this and then have a blast filming them! 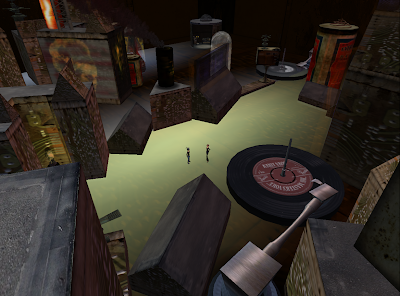 Under the fun, though, there's a serious, purposeful side to oona's virtual work ethic.
oona Eiren: When I first got here, I had no idea how to use it but am slowly getting a handle on what I want to do. Now, I'm very excited about what I'm achieving, and I hope it's a launching point for my career. I want to show work I'm doing here at venues and places in RL, too. There's lots of places to show stuff, and I want to my feet in RL, not get lost in the SL whirlpool. I had a gallery in Avalon - that was my first public outing, but I always wanted to do bigger stuff. I do think people are missing out on a lot if they just stick to 2D. I must say the real artists for me are the great builders here - that's the way to go. I like what you can do if you layer, say, three or four ten second loops and play around with them. 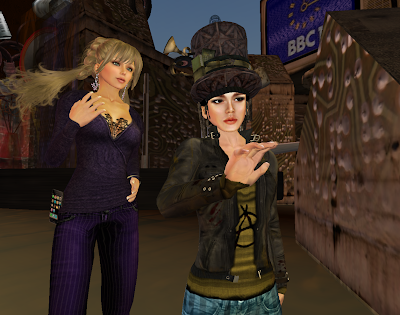 oona Eiren: Sound is so important!  Imagine watching a David Lynch movie to a soundtrack from some random band. It would ruin the experience. I'm a fan of Lynch. You should watch 'Fishing for Ideas', a video where he talks about his process of creating. Great stuff. 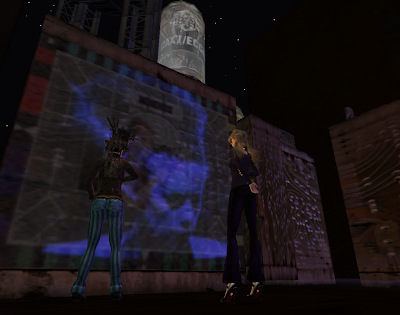 Among all the melancholy crackles and pops, a single, timeless, living image stands out in the build.
oona Eiren: That's Elsa Lanchester, the Bride of Frankenstein. I love this image, because she is strong. She rejects the monster. She is looking away, like she's saying  - No, you don't just build me to be someone's bride!
Oona a paused.
oona Eiren: I'll do a happy tune next I think - after all this doom and gloom :))) Maybe even a tune you can hum along to!
Live! is at the Split Screen Installation Space from tomorrow Sunday, February 6th at 2 pm SLT.

Email ThisBlogThis!Share to TwitterShare to FacebookShare to Pinterest
Posted by Thirza Ember at 4:47 AM Labels: ArtsParks, dividni shostakovich, elsa lanchester, oona eiren, slartsparks, splitscreen installation space
Newer Posts Older Posts Home
Subscribe to: Posts (Atom)
This blog is about the virtual world called Second Life, its people and places, where real ideas, imagination and fantasy come alive.
Google SecondLife if you want to join in the fun, however remember this: it may seem like a game, but it's no joke.