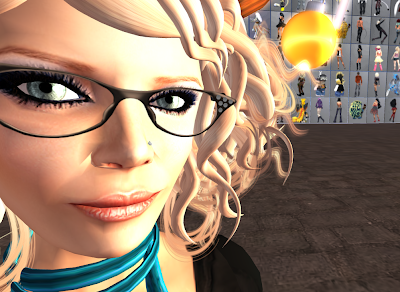 She's seen more avatars than probably anyone you know. This coming Tuesday, Gracie Kendal celebrates her 1000+ Avatar project with a big party at her studio on sim Coyote. It'll be an opportunity to both play and pay - if you purchase her book this week, there's a good chance you'll have it in time for Xmas. That's a lot of avies under the tree! Gracie's already in festive mode, with her baubled antlers. I had to ask - how does she feel about being a published author?
Gracie Kendal: Haha stressed! No, it's been cool. As an artist, it is hard work getting your work out there. and this book is really a work of art rather than a written manuscript. It is mostly pictures, and there is a limited audience, so that is tough. 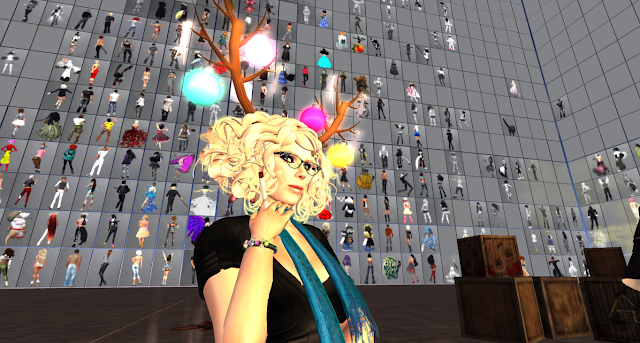 Marketing one's work is an art form too, and the new media have made it even harder to get the right  balance between overkill and not saying enough. Does she feel like she's getting it right?

Gracie Kendal: haha well luckily in the long run, I think my friends and acquaintances will forgive me for publicizing (or spamming as some call it) my book. I feel guilty quite often for sharing my work. I don't want people to get sick of me, but this is what I do. My art. I figure - how many times do we hear artists like Britney Spears  or J-Lo mentioned in a day, and people just grin and bear it... of course, I'm not comparing myself to them - I'm more like Adele!!! Just kidding! The response has been really fantastic. People often contact me about what an amazing project it is, and how important it is to the history of Second Life. I hope it is, because success to me isn't monetary, but rather it is understanding and appreciation. Maybe even validation, and I feel I have that with this project and books. 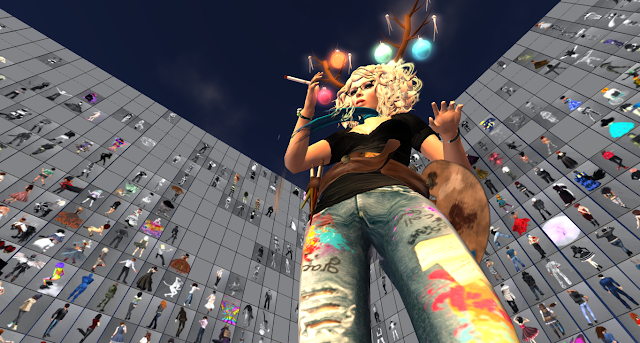 I'm not sure Santa would approve of that ciggy, Gracie. I think there's a rule about antlers and naked flames.
Gracie Kendal: The hardest part was when people would be posing then go afk! When I was shooting, I would get a momentum going, a routine, and sometimes it would only take a few minutes per person. I would hate to make anyone wait, so it got a little frustrating when people went AFK without saying, and they didn't respond to me asking them to step down. On the other hand, one of the best bits was that I got to see some amazing gowns, and I showcased them a little in the book. People are so creative and talented here. Especially with fashion.
Speaking of fashion, I wondered if anyone (apart from me) had ever shown up with dreadful misplaced prims or a cringingly bad noob outfit that she just couldn't bear to photograph. And did she say something? The idea made her laugh.
Gracie Kendal: Well, I did have quite a few newbies pose, and sometimes skin was showing where it shouldn't. But I was always able to cover it up with a different camera angle. Anyway I am not one to really give fashion advice. I have been in this same outfit for 2-3 years now! I did have one guy with an erect penis; it's wasn't an oversight, he was a theatre student at a University, and it was a political statement but I didn't discriminate from shooting anyone however they wanted, so I took the shot and it is in the book :) On the other hand, some people contact me (mostly noobs) wanting to know where they can buy this or that complete avatar.
As we talked, the walls gradually rezzed - for Gracie too, who by rights shouldn't have been having any kind of lag - one by one, the grey tiles popped into life, showing avie after avie. The effect was mesmerizing. Camming back, the enormity of what she's done became clear. 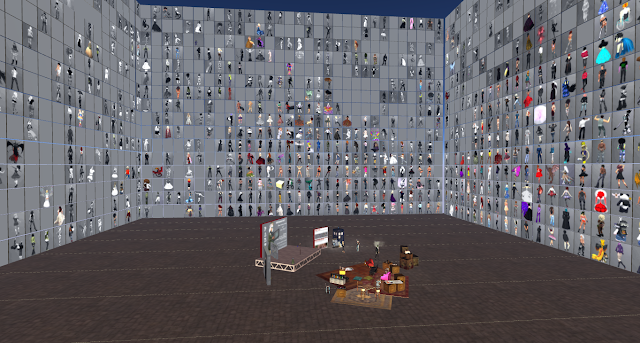 While the first 1000 avatars were shot from the back, in Volume 2, you get a view of the avatar from the front. Gracie did this for several reasons.
Gracie Kendal: Firstly, I saw so much energy and passion from the front - people smiling, smoking, using gestures, waving their hands etc. There was so much humanity. SO much realism. They were so dynamic Even though the idea of the backs is more symbolic of anonymity, I reconsidered that idea. Having an avatar in Second Life, is almost the defintion of anonymity. The avatar is a mask that we wear. How much we reveal is up to each person.When the Google+ and Facebook Nym wars started going on, I thought about showing the avatars as strong independent amazing beings. I wanted to show them standing up strong as online representations. So I wanted to portray avatars as avatars.
If you were in Book 1, you don't get to be in Book 2. Gracie took the trouble to make sure she has 2000 different accounts, although the number of alts remains undetermined - she suspects, with a giggle, that it's rather high. And although she has a smattering of famous names, including Bryn Oh, always a generous supporter of artistic projects, and 'a Linden' (say no more), this is no Who's Who of Second Life. Eventually, I found the pic of me. I'd forgotten about our photoshoot, and was intrigued to see the dress in which I'd 'chosen' to be imortalized is, in fact, the first dress I made for exploring OpenSim. You can't take your SL clothes with you, sadly, so I had run up a butterfly-wing number to hypergrid in. Odd, because I hadn't meant to wear anything 'significant, and yet... 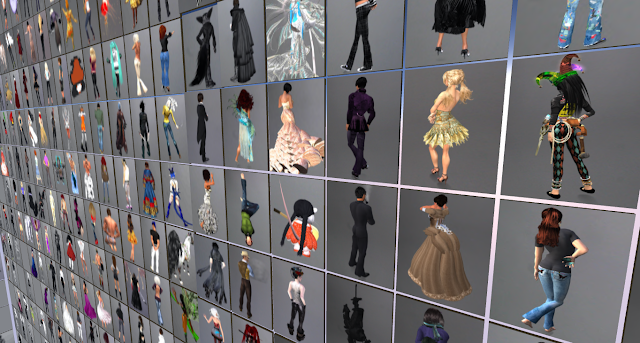 Gracie Kendal: Some people came here with an idea of what they wanted to wear, something with meaning, and others just showed up and said, OK, this is what I'm wearing today.. I'm good. It is all about diversity - an anthropology of SLers. 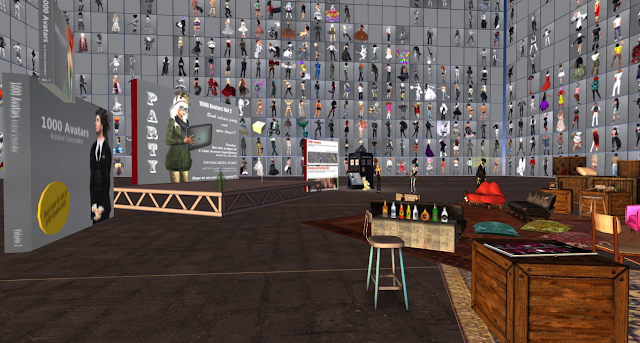 Gracie Kendal: I have actually been thinking of taking it down soonish, maybe the beginning of the year, as I have a big mixed reality show coming up in May I need to start working on. It is time to move on I think. I've been working on this project over a year and it has had its day in the sun. I can always re-rez this, it's not like it will be gone gone, but I think for me psychologically I am ready to move on.
All the more reason, perhaps, to get your copy of the book, for posterity. But hey, even if you're good for gifts this year, drop by here on Tuesday anyway, be part of the party, and wish Gracie well. See you there.

Awwww what a fabulous article!!!! Thank you so so much Thirza!!!!