And again, unto me spoke the Seven, saying:
Child of the LIGHT, O THOTH, art thou,
free to travel the bright path upward
until at last ALL ONES become ONE
The Emerald Tablets of Thoth, The Seven Lords

Open Habitat is a sim and a group of about 700 oriented around science, philosophy, critical thinking, and the arts owned and founded by Maria Blaisdale. She was involved with the original Open Habitat, a project by Oxford's philosophy department to explore how SL could be used for teaching, etc. Maria took over the sim when the "experiment" ended.
Thoth Jantzen is an advisor and instigator to the group, his build "Cosmique III" is part of the 'art' angle. It's a unique place for people to go for some fun, and to help raise funds to defray the cost of the place. Philosophy and science have been the main focus of most of Open Habitat's events - some of them streaming a live debates from London. Philosopher Stephen Law came into SL to discuss a book of his, and they hold weekly discussions on philosophy, psychology, and and science led by professors and working professionals. For art, there's some work there by the likes of Artistide Despres and Glyph Graves. The Cosmique III are consists of various goodies, like the ground-level art gallery, which has Thoth's sculptures and a nice installation on a King Tut theme complete with a Mask of Tut that comes from the lost and lamented Rezzable show. 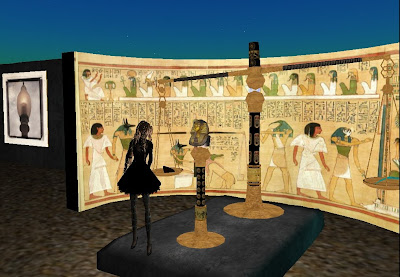 You can TP to the Kaleidoscope, to the media active gallery and other places, from a Stonehenge portal system (it's like falling through the Time Tunnel!) Since names were being dropped, I asked Thoth how he picked his own...
Thoth Jantzen: The metaphor associated with the ancient Egyptian gods Thoth and Anubis tie together in different ways to a lot of interests I have; science, philosophy, linguistics, the arts, and I'm a bit involved on some community projects relating to those topics. About three years ago I started Thothica SL, an SL community focused on science, the arts, and philosophy, which is still going strong under the guidance of some friends,who have done most of the work, I'd say it's my "best" creation in SL.
We went to the nth dimension dance cubes, where "The Carnival Is Over" by Dead Can Dance was playing; all the constructs and sculptures are in sync with whatever is playing in the parcel at the time - can you imagine the chaos if it were otherwise? - but that particular song was so perfect for the visual effects, it was mesmerizing. All this tp-ing and bright lights, half the time I didn't know where I was, but that's how I roll. There was what I took to be Cirque du Soleil and Elton John live... it's very Vegas, ideal for such a big energy rich immersive experience. 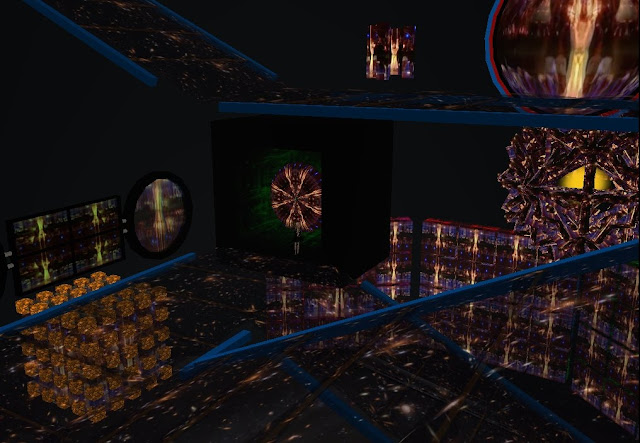 Staring at dear old Sir Eltie doing his thing all over the globe, I asked the usual question and after some 'Oh, there are so many to choose from' hedging, Thoth came up with two artists he feels worthy of being imported, interpreted and generally feted in Second Life. 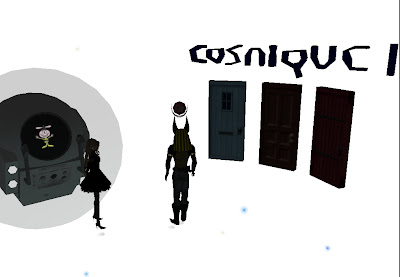 Thoth Jantzen: Albert Einstein and Leonhard Euler. The formula's they've given the world embody SO much that's so deep, so important, and so simply and elegantly that in addition to the scientific value, there's a deep beauty that, I feel, certainly qualifies as art. As for how to best represent them in SL, I have zero clue... 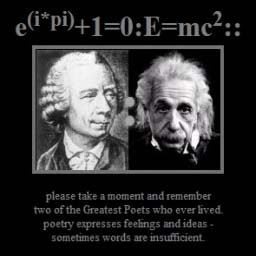 Well, that's OK, I have no clue who Leonhard Euler even is.
We went to the media active art gallery and I admired the unique pieces by Feathers Boa, Glyph Graves, and 9-volt Borkotron. I asked Thoth about artistic collaboration in SL.
Thoth Jantzen: It means that some really good artists who'd otherwise not have much exposure get a chance to have their work seen by a lot of people. I've been involved in some groups and collaborations, including Diabolus and Caerleon. Collaboration in larger groups is sorta like herding cats when you talk about artists, and while the results can be great, the process can be...difficult, shall we say! Anyway, I see myself more as a builder. In a sense, all I really do is create a canvas on which the real art paints itself - in my case, music videos. When I came into SL, i had no idea I'd do much in the way of actual building, let alone anything resembling art. I was more interested in learning and community building. I sort of fell into the kaleidoscopic, 'media-active' stuff fooling around with some video screens one day. I felt that the normal flat screens were boring, and that was the start of what you see here now. The V-Max is possibly my favorite piece in SL, but the "Octoscope" on ReactionGrid is the newest and, I think, the nicest thing I've built so far. Working with the Caerleon Art Collection on the Reaction Grid - is great - sort of like 'pioneering', as Georg Janick likes to put it. The folks who run RG are great, very responsive, and despite a lot of unexpected "learning moments", it's been really good so far there. Places based on the OpenSim software, like ReactionGrid, SpotOn3D, and OpenSim, are growing in numbers and in size, and offer options to everyone, from artists and educators to businesses and institutions, and the casual user. I've recently begun to spread my 'virtual wings' to other places, and from what I've seen, it'd be a great idea for others to do it, too. Being 'virtually mobile' doesn't mean you have to abandon SL, but it does give you more options to explore things (waves hand) 'out there'...