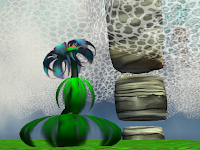 From nut to ember, trees warm, shelter, and  feed body and imagination alike. Like us, they stand with their heads in the clouds, their feet trapped in this earth, shaped by storms but forever reaching out to the wider world; like us they know times of plenty and of loss.  In their ancient, productive silence can be read all the knowledge of the world, into their form, a bridge between worlds.
If we could go to a Gloucestershire valley right now, I'd show you a coppice of Linden trees that is two thousand years old, where there is the scent of the sap, and the light dances through rich broad greenery.
But we can't.
Which leads one to think: what about trees in Second Life? At places like Straylight, the technique of tree making has become so advanced that the standard SL Pine looks pathetic, except perhaps in old forests like Kahruvel. Yet not even in the new, picture perfect Cap Estel can you smell the sawdust, or hear the busy rush of wind against leaves, or suddenly spot a squirrel on a tree trunk, suspended thirty feet in the air, grey against grey. But this is not that world. What is needed is another route to the vertical highway. Shouldn't the metaverse have its own true woodlands? 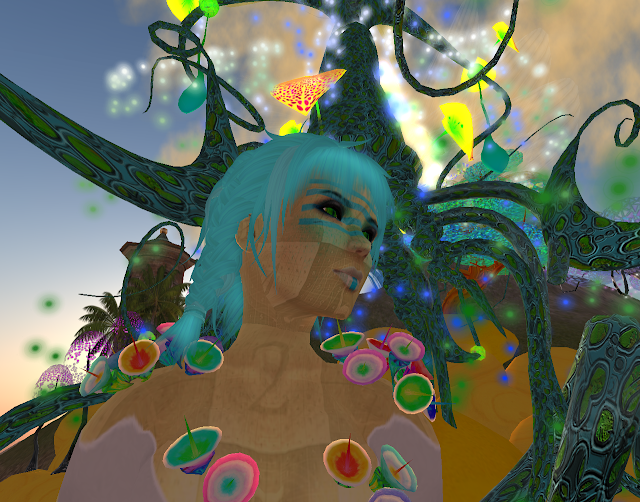 soror Nishi says yes. The daughter of a flower seller, she has during her life turned her hand to both farming and architecture, and loves to paint, but rather than using SL as commercial outlet for her RL pictures, she prefers to bring together all these interests in 3D compositions. 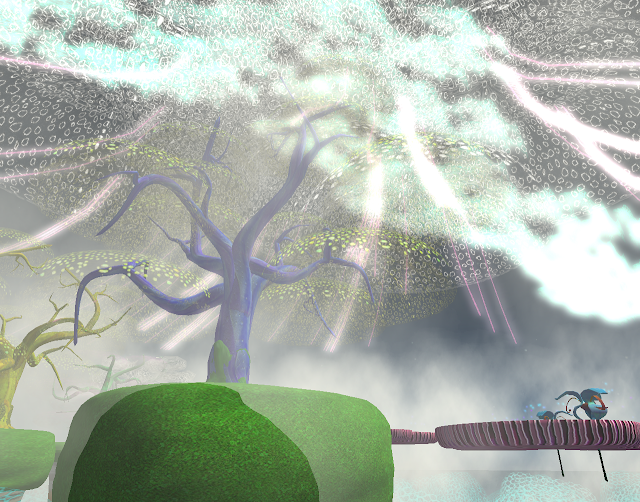 Using large, high-quality scans of textures in crayon, watercolour and oil, and Gimp and Blender, her flora virtua exotica originates from a taoist approach to the subject.
soror Nishi: If you don't understand the patterns then you can't really build a tree. I've seen plenty of unconvincing trees here in SL. If you don't look, you dont see, and if you don't see, you can't learn the patterns.
Soror's trees are like her - bright, bold, whimsical, fun, and beautiful. 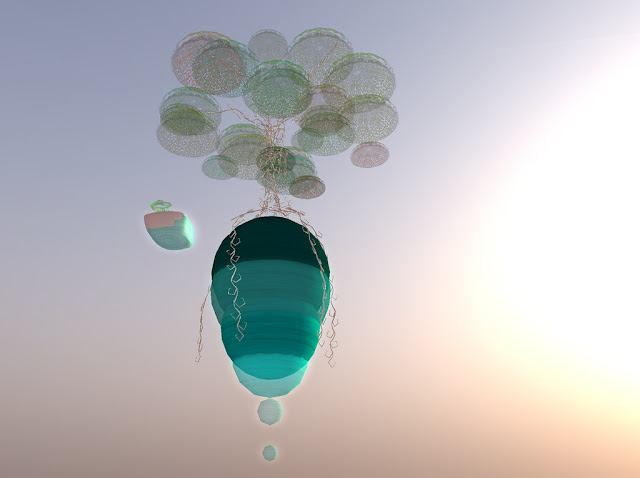 She has created two-prim beech trees, and woods that run to the many thousands. She made the Norse tree Yggdrasil at The Companion, Frigg Ragu's folklore sim, currently under reconstruction. In her version, the monumental tree of doom that connects the underworld to our realm and to the heavens above floats in serene glory, the roots caressing the weight of the world below. 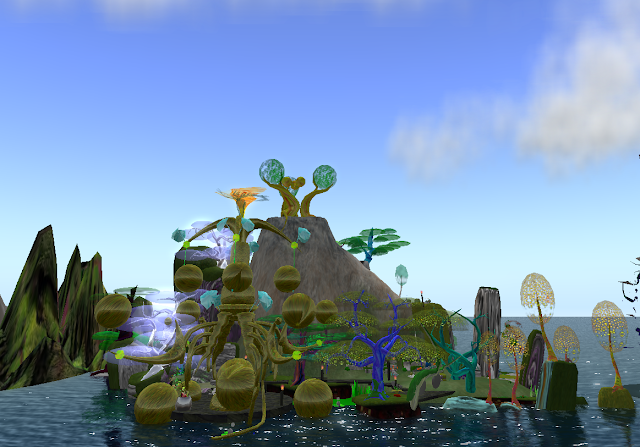 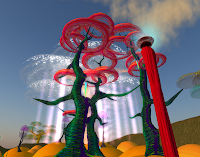 Playwright and lover of all things Irish Maeve Eirin filled her Celtic storytelling mountain, Skellig Medb, with soror's trees, including a stand of the Tree Sisters, with their distinctive red canopies.
Mythical woods grow best among poems as lovely as trees, when the quality is right. Before importing a texture, one should consider whether it is good enough to hang on the wall in RL. If not, then it will disappoint on the screen.
In the garden she has created beneath the UWA gallery, we talked about the panoply of bricoleurs and engineers to be found in the creative community of Second Life. 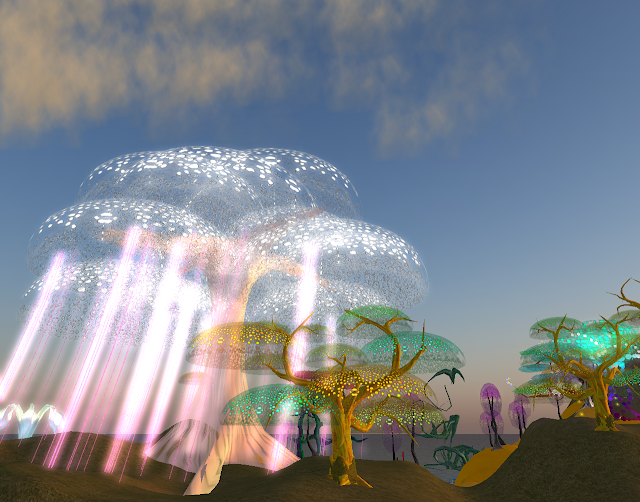 Taoist practice is working with the ordinary acts of life without any fabrication, how does that work here? We spoke of Levi Strauss, and I asked: If you understand the bricoleur as a hobbyist, a tinkerer with existing material, and an engineer as a pioneer who strives to understand how things work and get beyond the limits, in whatever field that might be, do both groups have their place in the metaverse?  Have SL quality standards gone up over the past few years, have limits been significantly overcome? (You know, just general chit chat.)

soror Nishi: Well, when it comes to textures, lazy is easy. Quality it isn't always top of people's list. I would like 2048x2048 for large prims, but we have had no new tools for years. Technique is important, in fact technique may be responsible for style. But without emotion there's no reaching the audience or pleasing oneself, and the funny thing is that it has nothing to do with textures. Is it a question of heart or head? I think both have to be present, I think probably it's more about synthesis - good art, anyway. I feel strongly it should stand on its own, without pages of explanations and theory it used to be called 'post-creative intellectualisation" but, having said that, people do like to be told what to think... 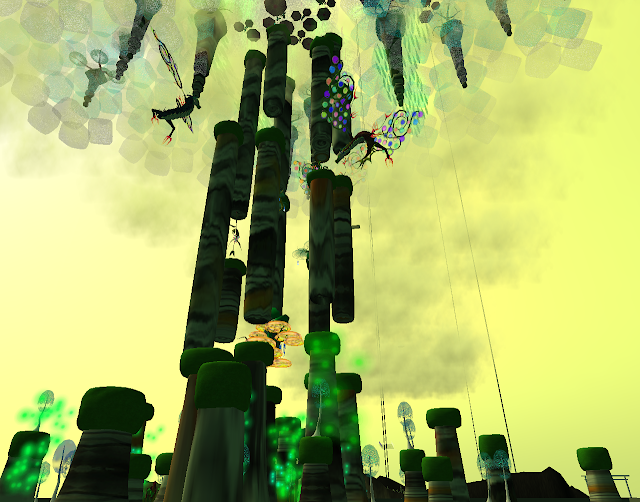 Soror's latest build is, of course, the IBM-sponsored Tree of Trees. It rises from a serene pool of of swirling greenery, illuminated by emerald particles.
(Gosh did I say Emerald? Sorry.) 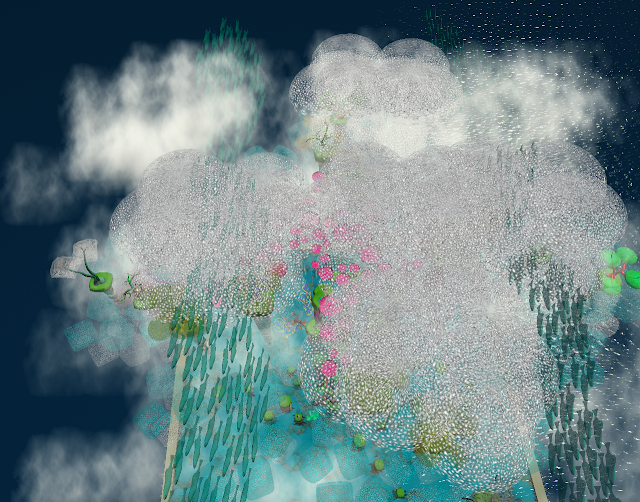 A forest of stumpy, almost fossilized topiary forms the rootstock and trunk of a massive community of trees, its nebulous crown lost in the region's clouds. 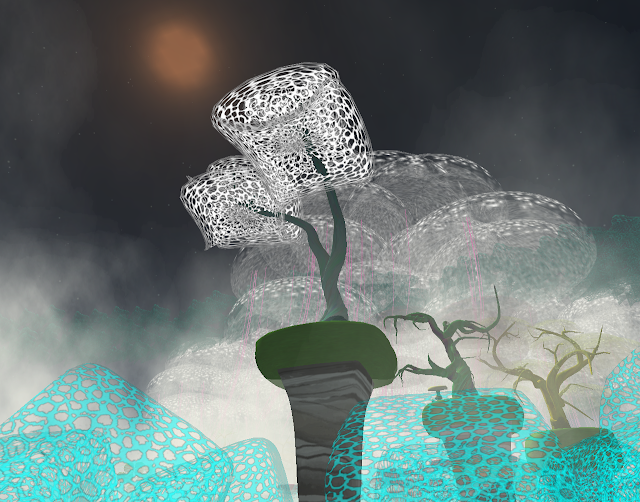 Up here, the delicate white and blue canopies of goddess trees fan out over little islands of greenery, where orchids grow, protected by Doris the Dragon and her companion. The triumph of the tree as a village, a home for the diverse; resting, growing, flowing upwards together. 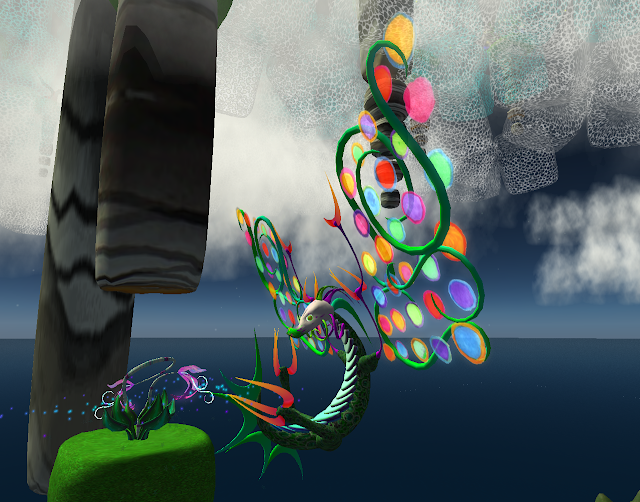 Thank you, Thirza, for a very thorough article.

IBM opens on Saturday 11th at noon and has developed a bit since you were there.