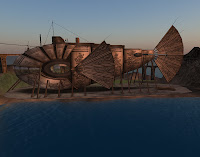 It was Giuditta Broome's idea to start Arts Parks, back in early 2008. She came to the group with the notion that virtual worlds offer the opportunity to expand on a real life phenomenon, the literary park, and illustrated what she meant by showing us two places not far from her home, Parco Pirandello and Parco Salvatore Quasimodo. The parks aren't just museums to two Nobel prize winning writers; they go further than simply ... pickling their poetry, as it were.

The parks use the landscape, imaginative sculptures, buildings, gardens, and interpretive displays that go far beyond the facts and figures and create an extra layer of inspiration to those who know and love Pirandello and Quasimodo (no, not that Quasimodo), and to give the uninitiated a fresh and modern presentation of their work. Imagine, Giuditta said, how virtual worlds could be used to present and interpret artists, poets, musicians, showing their lives and their works in ways that would never be possible in real life, combining multimedia, representations of the places they lived in, and famous places of the imagination!
Thanks to Second Life, any fan of an author, painter, musician, thinker, whoever it may be, can build something that illustrates that artist - or better, that illustrates their vision of the artist, for by constructing a place that celebrates another's art, one makes new art, and reveals one's own passions, experience, and imagination. Some purists argue that importing someone else's work into SL is at best an appropriation at worst a theft of copyright.  In SL's original art world circles there is plenty of appropriation going on, notably sculpties 'borrowed' and incorporated into installs without acknowledgement and I agree that's bad. Mindless repetition is also bad. The 'Arts Parks' you'll find in this blog, however, aren't made by people trying to turn a buck, or pretend to be the creators of the works they show.
Everyone who welcome others to look at their art shares a part of their mind with others, but this adds a layer of meaning in that it brings to the attention of other residents those poets, composers and authors we may not have heard of, or forgotten, or simply never thought about in the terms in which they are presented in Second Life.
ArtsParks was formed to promote this kind of build through competitions, events and a TP system linking together as many such places as possible. My job in all this was to write the blog.
Like so many SL groups, ArtsParks  faded long ago. The blog survived, alone, quietly, full of typos. Its journey has been meandering, piecemeal, and parochial, barely skimming the surface of the immense reservoir of culture and creativity in Second Life, let alone keeping up with the dozens of openings and events that happen every week. There's a lot of self-aggrandizing in SL, there are people with no other talent than marketing, or some talent but no sense of proportion, or quite a lot of talent that fades in the light of relentless money grubbing. Original art in Second Life can be brilliant, fascinating, but so are places where people share the real(ly) excellent things they love. It's that love, and that spirit of sharing, and being delighted in the talent of others that has kept me searching for art parks.