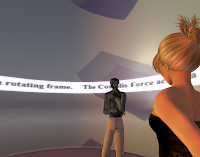 It's a turning world. It's one of the first lessons you learn in Second Life, playing that strange game of wavelength catchup with people on the other side of the planet who are breakfasting when you're ready for a night on the town. Not to mention the phases of virtual existence, from the newly hopeful to the jaded and fading. In the global community, to be able to connect with others it becomes necessary to aim your conversation with these things in mind, sort of the way you aim your body when you grab a suitcase off the baggage carousel, so that you don't end up walking away with the pink polkadot carryall, which would be bad, because that one has my stuff in it. 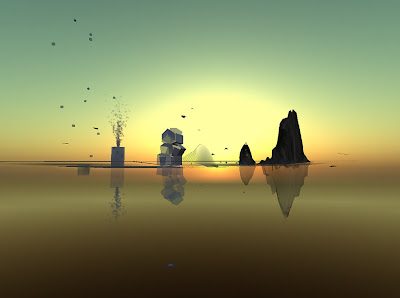 Or contrariwise, the Coriolis effect.  Nothing pink and polka dotty in the frame of reference of Oberon Onmura's very masculine new installation Coriolis, in the sky high above TCC Island. Six months in the making, it contains many elements familiar to those who've visited other Onmura build, but this is far from a repetitious dramatic arc. This time, the apparent twist in the trajectories of moving objects - even the weather -  due to the turning of the earth is at the heart of the concept. You will also find notions of weight and propulsion, the cycles of creation and destruction, the phantom and the physical. Soon you become aware that what had at first seemed a fairly empty space is populated with discrete sensations. The opportunities to interact with the different elements - whether it's sitting inside the Ghost Mountain, obstructing the cube spiral, or riding a spouting prim -  draw you even deeper into the artwork. 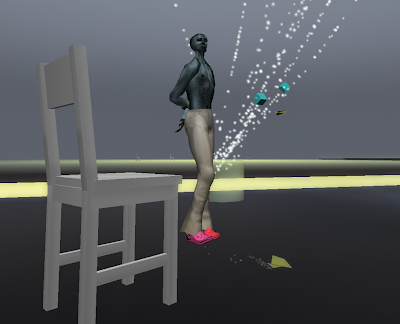 A single aluminium chair lifts to a central column on a square, edgy, quartered plane. A flock of creatures, halfway between birds and paper planes, flies restlessly about the build and chairs, more chairs, suddenly appear, pale and plain, shifting and falling over. Sit on one and see what happens. 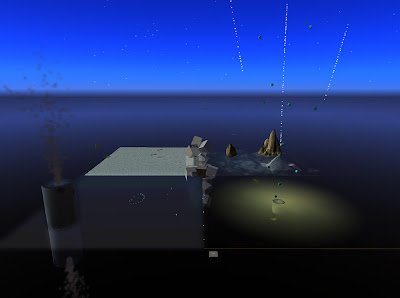 Like four seasons, each quadrant has its own mood, sounds, and effects, its own point of focus, from the fizzing white energy of the Moire to the violence of falling cubes and the spectral music of Xenakis in the Mountains, to the exuberance of the Yellow Geyser and the stately swarming singing prims of the Cooling Tower, which contains within a hidden message. Turning, each quadrant turns on the viewer, offering for a moment the optical illusion of seeing where we are in the world. 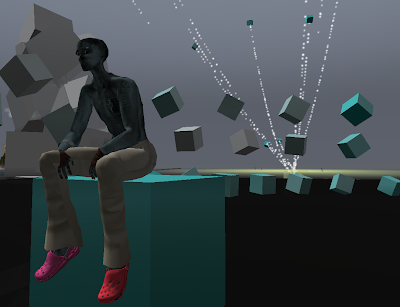 Coriolis opens tomorrow, September 15 at 1pm SLT with a concert by Zachh Cale.