The natural love of life gave me some inward motion of joy,
and I was ready to entertain a hope that this adventure might,
some way or other,
help to deliver me from the desolate place and condition I was in.
Jonathan Swift, Gulliver's Travels Part III
Beware of Draxtors bearing gifts. Oh, not the vid-spam of which he is such a generous purveyor, this is a more subtle kind of gift, the 'must see LM' variety. The first was to Laputa which has already been blogged to death, something I discovered after spending 15 minutes trying to understand how a pedestrian-looking bunch of shops could somehow be a fantasy japanese castle. 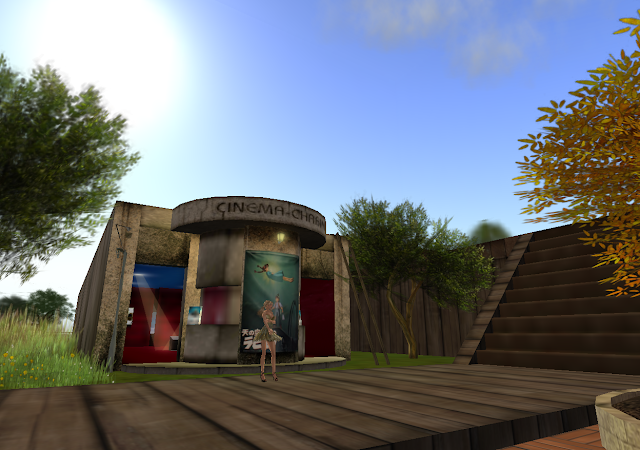 Turns out you go into the cinema, click on something, and then get tp'd up into the sky. 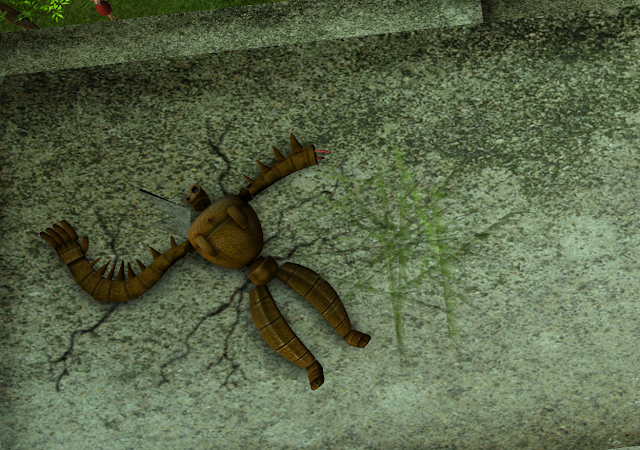 I'd lost the will to visit after reading reviews and comments by anoraks whining about Robinn Magic's lack of respect for copyright, not to mention a side thread about strange sex noises involving Crap Mariner and (I'm guessing) those cats he's always banging on about. 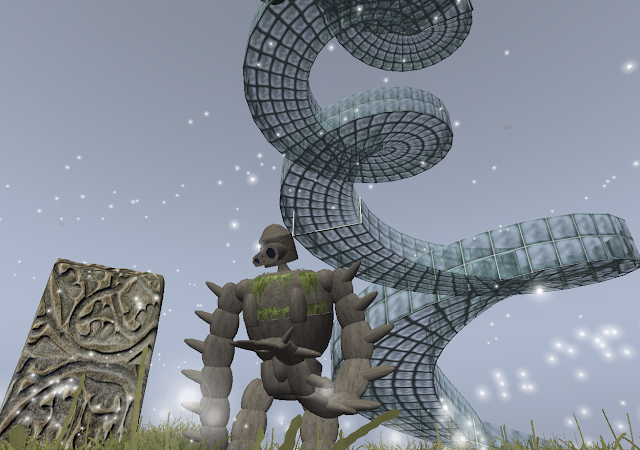 I even visited this other Laputa, the 'property' of blackbelt Allen. It's small but charming, just try not to fall off the crystal spiral. There's a bell at the top. Clicking on it over and over again doesn't make anything happen. I promise. 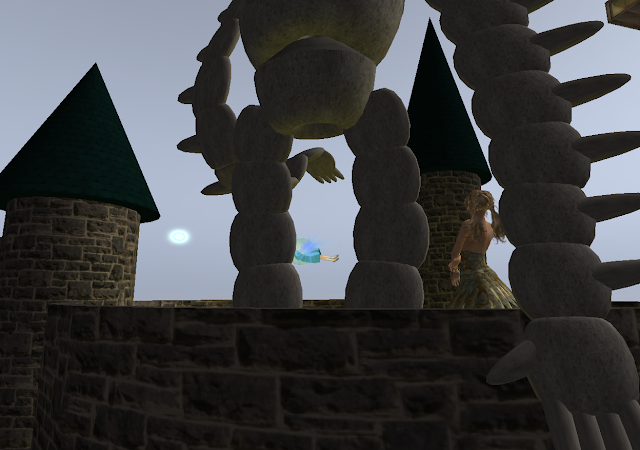 Out of time, the best thing seemed to be to just watch professional foulmouth ColeMarie Soleil's machinima of the build, and be done with it. OK I watched only the first 30 seconds or so. But it's probably good all the way to the end. *I'll never know* 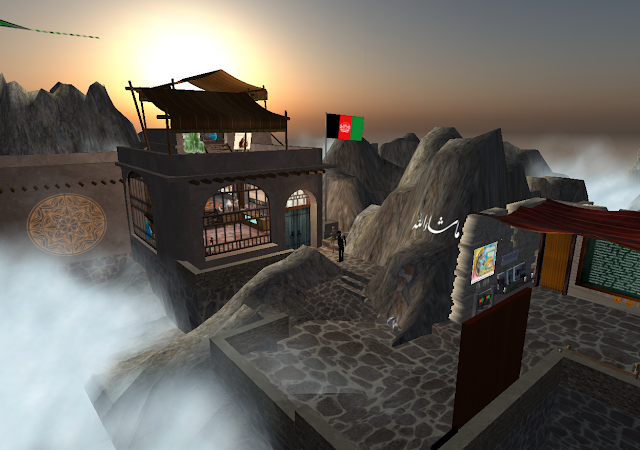 Second Landmark from Mister Despres was to the museum of afghanistan which was rocky, worthy and had cut-outs of the local fauna inside. The fauna outside included this specimen. 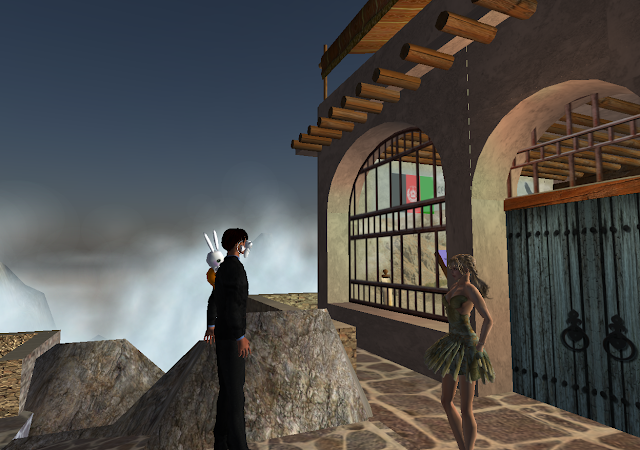 OK, my own wardrobe was not khyber-friendly, but a suit and and backpack with ears, or is that rabbit performing a Zindra act on this guy?
When Draxtor passed me the LM, he said he found the place during a RL 'family excursion' in SL, so if you want to see what Mrs Despres and the little Despresses think goes on in Second Life, tp to the location. I'm thinking there's some dissimulation going on in that household...
Luckily, before despression could set in, there was a TP from Robin Moore, to see his new install, tentatively called Playground of Love. Pranja Seetan took the photos.It's a game of perspectives in every sense, a really complex, entertaining and thought-provoking build. 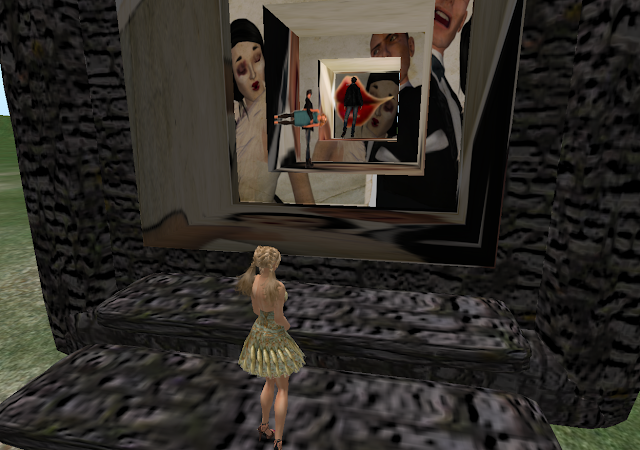 You walk through the frame, which has crazy poses hidden in the walls, and emerge into a fairground full of symbolism, including a merry-go-round and a whole load of small fascinating details, as one would expect from the Dane. It's going to be on show at Arte Libera in coming weeks, so look out for it. 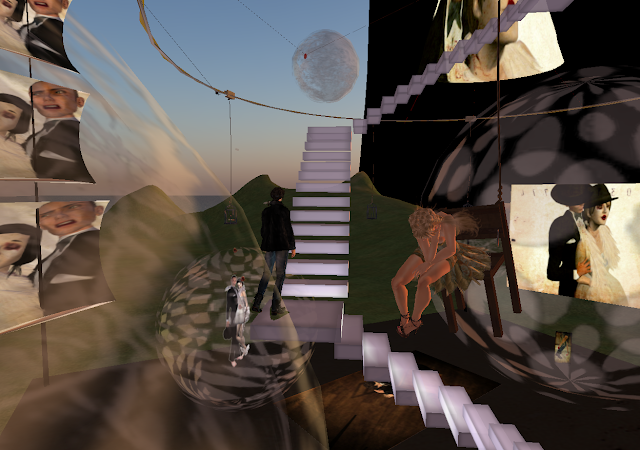 Next, gorgeous Gracie Kendal took my pic for her upcoming show on Anonymity. If you'd like to be part of the project, just IM or NC her, she'd love to snap you too. Look at that ciggy -naughty thing, smoking around all those developing chemicals. Always a laugh, being with Gracie, I'm going to miss her. Not a bad day, after all. 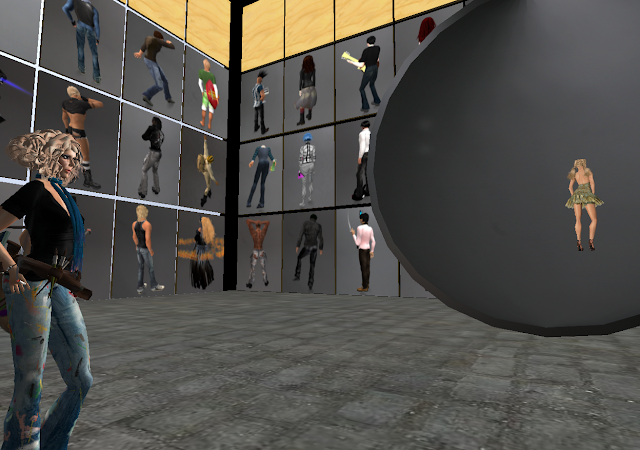