You know you were never really 'in' SL when an excitable Costa Rica resident launches into a chant of 'who told you that?' punctuated by a laundry list of alleged VIPs you've never met, with names like Harpic and Toxer, and it takes a good 15 minutes to remember that Mute has been renamed Block in 2.0.
In other more useful news, Mab MacMoragh has arranged for Oberon Onmura's meteorological instal Storm Cells to go on display again over at ::Soup:: it's really worth seeing. 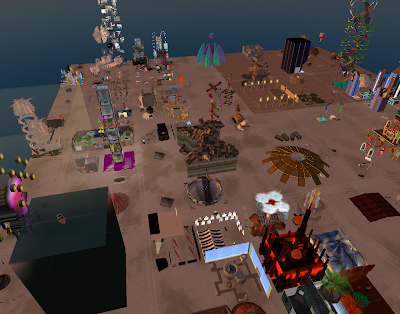 Anyway, B2 opens tomorrow, as you  have already heard seen and smelt from everyone else.
It's the Pepsi to Burning Life's Coca Cola; smaller, essentially the same, but with more bacon taste.Traditions have been respected - sims have names such as Rabbit Hole and 12 Mile, big names rub shoulders with less well-crafted efforts, and there's plenty of lag to go around.
Plenty.

The theme is Metropolis, or the city evolving, or something like that, it's pretty fluid. B2 is the usual jumble of styles and techniques, with lots and lots of towers. Chantal Harvey made a good straightforward promo;for it, with toonz by the lovely Kolor Fall.
The big black tower in the bottom left corner of the photo above is not what it seems, as you might expect; since it's AM Radio's offering. 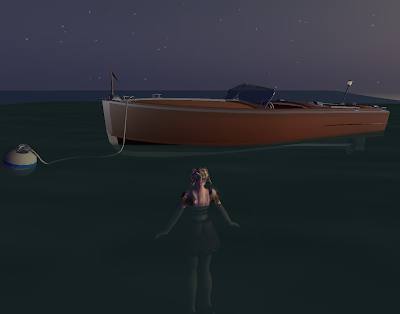 That boat is pretty securely moored. The build contextualizes the community below, once your brain catches up with it. Like being in a plane, when you're swimming. I'm not explaining this right: if you click on the pic it gets bigger, and you may be able to see what I mean. 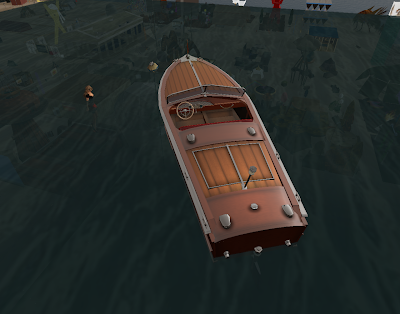 Or, obviously, just haul your butt over there.
Talking about observation, Betty Turead has made a super Painted Glass Tower. 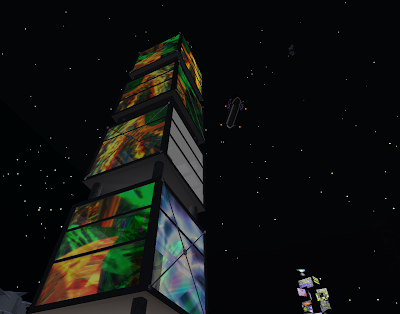 It's lovely to look at, lovelier to look out from one of the many rooms. The changing windows manage to make even Bryn's mud-coloured lump look bright and beautiful. 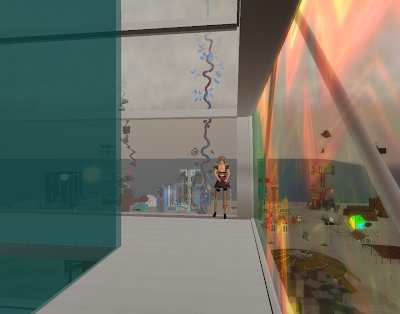 It's nice only having 6 sims to focus on, but it's still an awful lot to take in. Miso Susanowa has an interesting install called House of Cards, makes you realize how fragile our cyberlink with the world is, not to mention the shortness of my attentioooo Spock. -Hey! That's Ascii Art! It's what got Miso into computers in the first place! This is Miso's Flickr which has some great shots of the build, they really help put it into perspective. 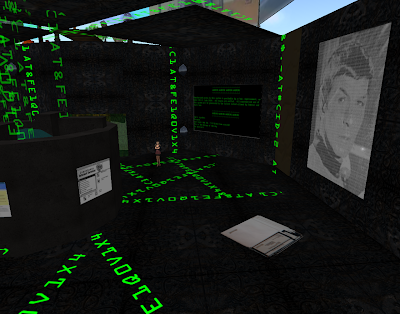 I love Soror's tower, seen here against an incongruent sky. Kere Delcon - who is 29 and thinks you should get a shrink, btw - has made a Metropolis dance hall. 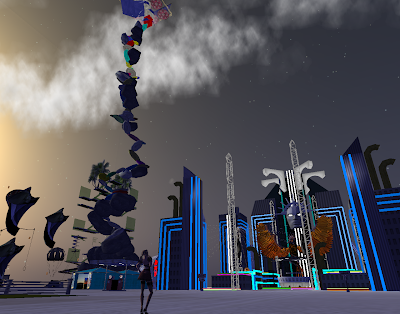 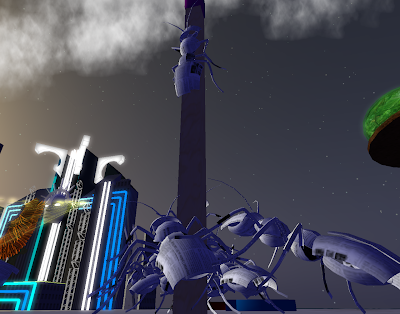 Wizzy has her temple up, but if you've been paying any attention at all, you know that already. 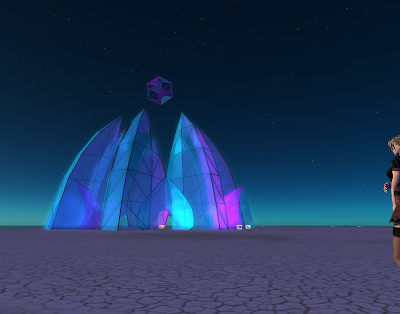 Pearl Pooks has built the Jetson's home, which is fun, and TheDove Rhode who, according to her profile is a fan of Love - gosh what a distinguishing feature that is, so glad she mentioned it - has made a sort of orange jello with slow dances. 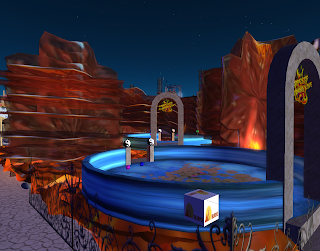 Like any gallery, B2 has to deal with the perennial dilemma: how to display big works next to each other without anyone drowning in pixels. It's going to be a pretty problem for the LEA if it survives and morphs into more than a talking shop. 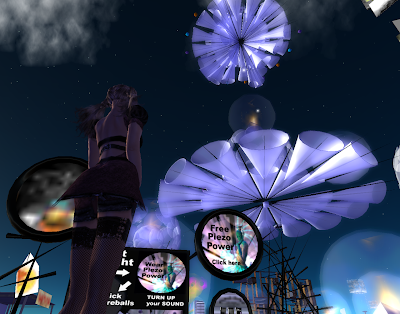 Maya Paris has the most exciting build of all. She has done a huge amount of really interesting research into sustainable technology. When you get to Piezo, follow the instructions and prepare to be amazed! 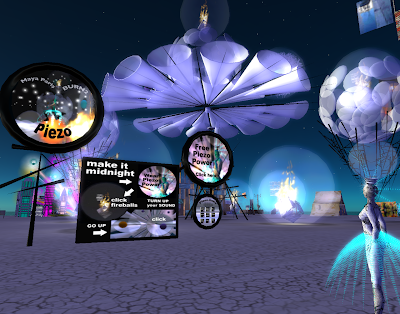 Once you've changed into he outfit, you can access a number of really interesting webpages via the HUD -
you learn about sustainable cellphones powered by talking, about  pavements that can make electricity out of your footsteps, and so much more! Maya gives you several different ways to access the info, and being a thoughtful soul, she's provided something for your avie to do while you read - dancing in the fire. 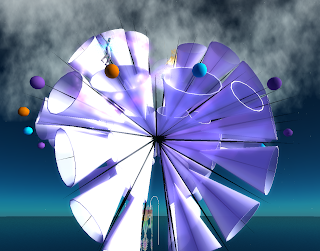 Thanks for the review Thirza! Yes, that Spock was a rather famous piece of ASCII that totally impressed me long ago and made me want to make ASCII art myself... and so I was sucked in...