In a world where the 'moving picture' reigns - art expressed through machinima, scripted sculptures, particle shows, and interactive installations, to name just a few, nessuno Myoo's avatar is perhaps his only concession to the moving art form.

Robot angel, or a winged cyborg: over the past three years in Second Life nessuno has refined his look, but never changed it; he's that kind of guy, one with well-defined tastes, and the confidence to let others discover it without making a whole lot of crass fuss. His look has its roots in scifi - the Blade Runner end of the spectrum; of comic books - everything from Popeye to Dylan Dog; and of horror stories, a genre he discovered in those impressionable years just after high school: nineteenth century anglophone writers like Bram Stoker, Lovecraft, and Poe but also twentieth century masters like Stephen King.

His fascination with the possibilities of parallel universes made him a prime subject for the irresistible opportunities of the metaverse; and yet he has remained himself, a hopeless romantic, who takes every opportunity to compliment and support his long-time partner in art Kicca Igaly, as well as create delicate and sparkling sculptures that reflect both a love of technology and a harking back to more spiritual and chivalric times. 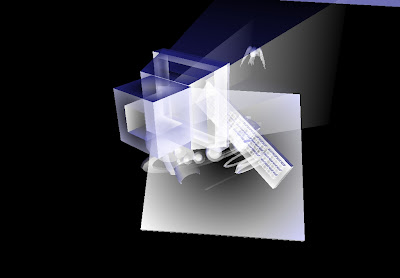 It's all about the adventure, the dance. The 37-year-old Italian's prims pause in their pirouette, stopping long enough to tell their story, of escape, of energy, of explosion expressed in light and shade. Textures like limestone or parchment, steel or marble, hold down for a moment lighter, abstract feelings, the ineffable captured in the intransigent. Yet even this is an illusion, a trick of the light. 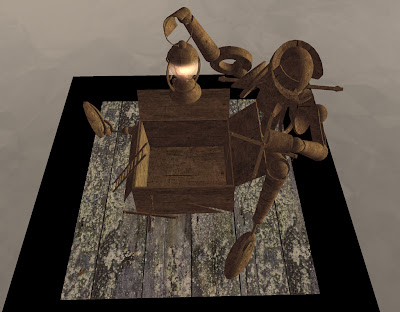 nessuno Myoo: The concept of movement is the basis for most of my Second Life art. Or rather, conveying movement through a static object. I see it as a small miracle, or a clever trick, if you prefer.. often the two things coincide. Movement is a sign of life, stillness has in many cases the opposite connotation. Finding a way to combine both life and death, movement and stillness in a single sculpture, that's a phenomenal concept to me, as deep and complex as life and death themselves, endlessly fascination and challenging, because the two conditions are at once deliciously balanced and strongly disharmonious. It's up to the artist to observe and capture the dichotomy, using the terms and tone best suited to  his or her own voice. 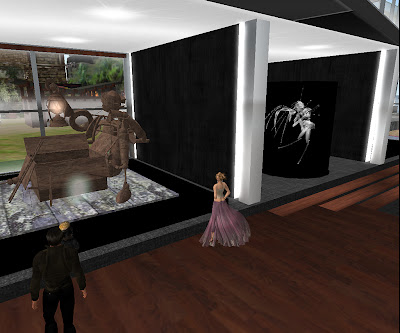 So, what about all those rotating statues, and multi-layered digital paintings?
nessuno Myoo: In today's society, speed has crowded out movement. Speed and movement are not the same, although their often mistaken for each other on a  superficial level, including here in SL. A lot of virtual art appeals to our primary stimuli, the ones that we develop as infants: lights, colours and sounds, which are often presented in a dizzying, apparently uncontrolled way and, like children, we just passively get absorbed into it. To make a statue that works aesthetically in an environment of chaotic life such as ours is a difficult task, one that takes a lot of effort, both on the part of the artist and on the part of the onlooker. And yes, there are shortcuts, but in the end the challenge remains the same.
It's a challenge he never tires of. His work is all prim based, never having strayed into the Blender jungle, but he doesn't harp on about that 'purity', or disparage those who prefer to mix it up. Unlike many builders, who start several projects and jump from one to another to avoid staleness and frustration, ness works on one statue at a time, in the same sandbox where he started out some three years ago.He's a declared introvert (which of us isn't, in this game) but the community spirit in the Italian-language sim.
nessuno Myoo: I very rarely have more than one project on the go. Each piece has its own story, its own feeling, and I find it too tiring to work on multiple statues. I generally build up in the sky. I don't really worry about people stealing or copying my stuff - it's all pretty heavy... 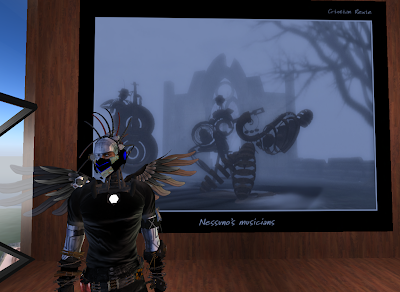 The sandbox is where he met his partner in art, Kicca Igaly, to whom he dedicated one of his most famous pieces, Angel in search of colors, and close friends like gallery owner Lion Igaly with whom he has collaborated for dozens of shows across the metaverse. The sense of community has grown from that handful of Italian builders into a vast crowd of admirers and collaborators, in particular, photographers like the amazing Icarus Robbiani whose photos are currently on display at the gallery.
nessuno Myoo:  It means a lot to me to see my art through other people's eyes, as is possible in photography. And it's especially gratifying when the photographer has a lot of talent, like Icarus who took these pictures during my show at Salimar. 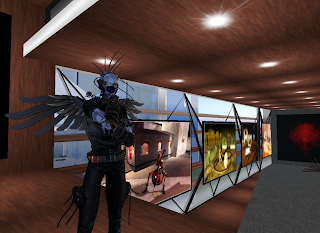 Photography and machinima are an important resource for his art, a way for it to escape from the SL viewer into the wider world, although not yet leaving the screen altogether: in a year or so, though, who knows. For now, ness uses his own Flickr page to show off his work to its best advantage. 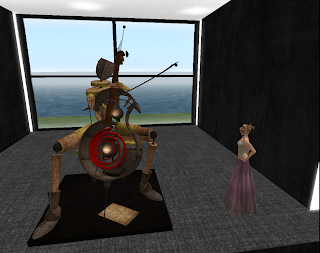 Truth be told, these sculptures are often get a little lost in their surroundings. Another paradox. Are they best seen in the flesh, or in 2D art where the lighting and the angle are just right? It's a puzzle; take, for example the famous cello piece, seen here in nessuno's own White Gallery. Even here, with only an empty window behind it, the form gets a little lost. Here it is, at the very enjoyable Palais Orleans show, run by madison Amahan and Elizabeth Weinberg, which has the photo art of Cat Boccaccio and the pastel sketches of Scottius Polke (a big departure from the style of his more familiar Lunamaruna and Mushroom art). Not lost, but less, at least in most viewers. 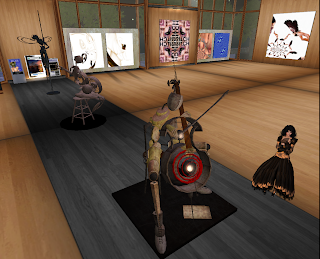 Cellist, guitarist, drum set, piano, jazz trio... the music element is important in a real sense. He's been making music all his life.
nessuno Myoo: All kinds, and perhaps not always well, but I've always loved to play instruments - everything from the guitar to the clarinet. I even got a violin at one point, and have composed about a hundred instrumental pieces. My influences include Charlie Parker, Kate Jarret and Vangelis, and of course the very Italian PFM. I think what attracts me to these musicians and others is the way they pay attention to every detail, every aspect of their music making. It's a state of mind I relate to. 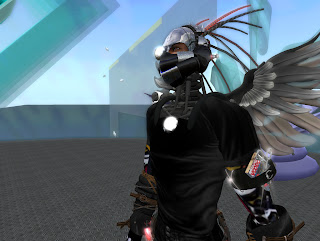 Perhaps this is the mark of how powerful his passion for virtual sculpture really is, that he has left behind much of his musical activity, and - rather than try to become one of those do-it-alls so common in SL - he's focussed on getting one thing really right. He sees his sculpting as the culmination, the coming together of all his interests.
nessuno Myoo: I believe that sculpture, like no other artistic discipline, calls forth all an artist's resources, whether that be music, or literature, cinema or painting.They all come into play. This has been my experience, a radical change in my thinking that has matured over the past three years. It has given me an opportunity to express all the art I have been a part of in the years leading up to this. And more than that, I've found a community, in which I have been able to thrive and grow. And that is the greatest good luck of all, of that I am convinced. 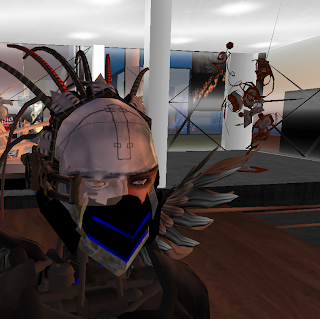 Email ThisBlogThis!Share to TwitterShare to FacebookShare to Pinterest
Posted by Thirza Ember at 10:54 AM Labels: icarus robbiani, Nessuno Myoo

Ty Thirza, for your words an patience :ç)