It's not Top Ten List evil, but it's definitely a nose-wrinkler, like Farmville and shoulder-pets, possibly Plurk. Having your portrait painted in SL, I mean. Not snapping photos while doing something interesting, I'm all for that, but just sort of sitting there, like the pigs in wigs you see on the walls of stately homes, or the women in Christower Dae's cattle-log, from which I got myself removed to the bemusement of every virtual signorina in Facebook. Why did it matter? Don't know. Where, how and why and where are the lines of acceptable admiration drawn? Having one's portrait done in SL seems to belong to the same family of demeaning and vacuous activities as beauty pageants which are even more eye-rollingly awful in the virtual world for all the reasons that have just crossed your mind.  So - Bleh - and it's a justified bleh; I'm certain because Voice of Reason and respected art historian Rowan Derryth says so too. Well, she nodded anyway. 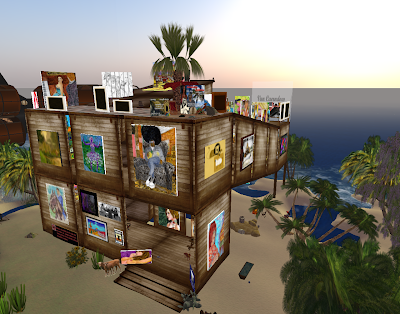 And yet, and yet.
This is Van Caerndow's Wild West gallery on studio Genre. His alter-ego, Urbana-Champaign based Phil Strang, uses craft paint on glass; once baked they take on a wonderfully luminous quality that transfers really well both into SL, and onto paper as Giclee prints.
Van Caerndow: I had some training in drawing and painting in school, but for 30 years I did commercial art. These paintings have all been done over the past 6 years. On glass they all take on a very different life, and when I found out I could scan them and print them out on watercolor paper I got really excited. To put them on canvas and enlarge them 10-20 times is amazing to me! 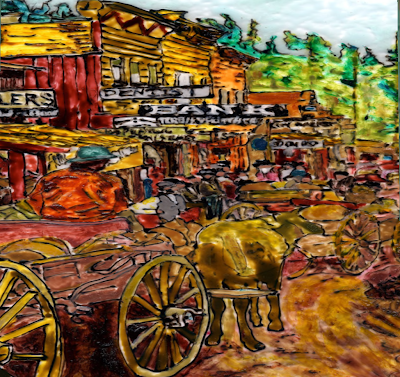 Walk around the beautifully designed gallery for yourself, until you find the strips with the western gunfights, believe it or not they are only 2" by 10" in real life. They were the dividers from the CD sections in his old music store, which crashed back in 2003. During the difficult months that followed, painting became therapy, and he put out some 150 paintings during that time, offering his work at craft and Renaissance Faires in the area. He put on his first RL show in the shell of the old music store, it was aptly named 'The Phoenix and the Gryphon". The hardest painting he's done is the detailed-packed Boomtown 1888 an 8x10 inch painting filled with dozens of tiny people, and my favourite is 3:10, where he's really caught the movement of the gunfighter so well. 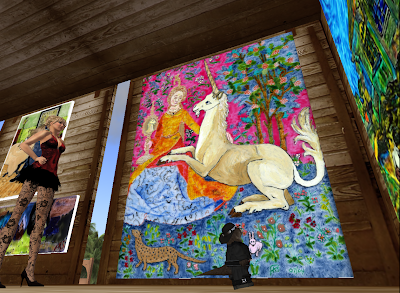 Apart from the West, he's done pastiches of  famous works of art, like the Cluny tapestry shown here.
He's a huge fan of Van Gogh - hence the name - and you'll find four 'Vans' in his gallery, this is his humourous version of the church at Auvers. We talked a little bit about Starry Night, and I showed him Watch the Worlds, a classic that still inspires.

Van Caerndow: That song came out in 1967 when I was 17, it's a magic year for music. At the time I took freehand drawing, and that was the first of 3 times I painted Boats at Saintes-Marie. And then I did my dorm room in the style of Van Gogh's room. 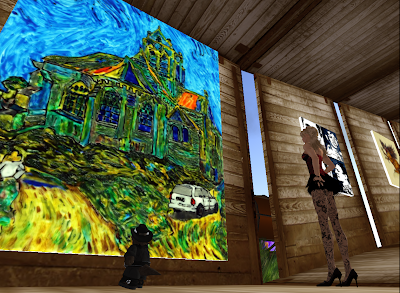 All the pieces on display in SL have been painted in the past six years. In the past year he has exclusively painted portraits of SL avatars. It's been a whirlwind social life. He moves in a circle where 90% of his friends are women, a considerable departure from his real life, and one that he enjoys very much. But it's not all fun and games.
Van Caerndow: I absolutely credit SL for teaching me a lot and for giving me confidence, and how to do a show - the importance of live music, for example - and for keeping me working! Painting portraits on commission is a great experience, but there's never enough time, that is for sure. 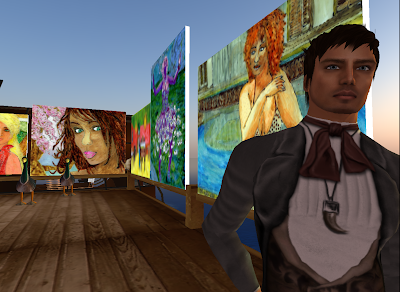 Commissions have come via word of mouth, he currently has 6 in the works, meaning he's booked through till January. Each portrait take several weeks to complete and starts with a 90 minute photo-shoot and chat, and the cost is about the same as what you'd pay for an hour of one of SL's top musicians. 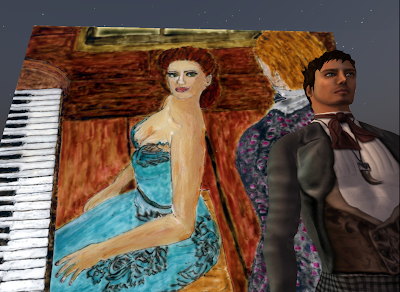 This painting of one of his SL idols, Terry Lynn Melody. I caught her the other night at Molaskey's, the excellent music venue of all-rounder Apple MacKay. TerryLynn is a good musician with some nice turns of phrase in her lyrics, but her voice tends to whine and in the digressions between songs, she goes into that kind of introspection that raises two possible scenarios, either ship her off to work with Oxfam for a bit, or bring her to the vet who was so kind when Mr Tiddles was poorly last year. Luckily SL is full of empty nesters, and some of them are music buffs, so it all works out in the end.
One boob looks much like another to me, but another feature of the portraits does stand out. Phil has given many of his subjects piercing azure eyes; when asked about it, he invariably mentions that his own eyes are blue, I wonder why. A new string to his portrait bow is manipulating photos of clients with pop-arty results, you can see three of the first attempts here, and many more on his FB page, which he uses to sell his stuff. And if you're over at Tasogare, catch his new show at the Palais Orleans Art Studio and Designs gallery. 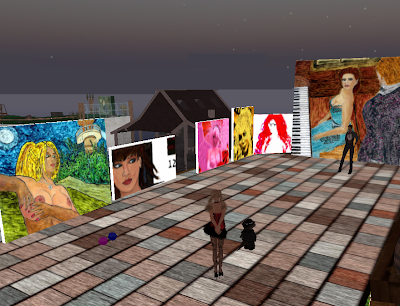 Can't say I'm sold on the concept - it still seems weird to want to have your avatar painted, as if that's all you are, a wig and cleavage. But the joy it's brought Phil, the liberation and pleasure that SL has provided him with, both as a person and as an artist, that's irresistible. Luminous, even.

And furthermore, as a comment, let me refer you to my plurk: http://www.plurk.com/p/86ncvo

This art is blowing my mind. I love SL!!!

Phil is clearly an artistic master.