Making movies in SL is super fun, but ideally, if you're a beginner like me, or not very good (ditto), common decency should prevent you from inflicting your oeuvre on all but your most kind-hearted friends. Someone who makes trailers for a living, and knows what he is talking about, told me the other day that most machinima are way too long. "To be really effective, the length should be between thirty seconds and a minute and a half," he said. "That's enough to get the story across, and keep the viewer interested." That seemed way too short. I mean, most music videos last about three minutes, the length of a song. I dismissed him as a harsh know-it-all. 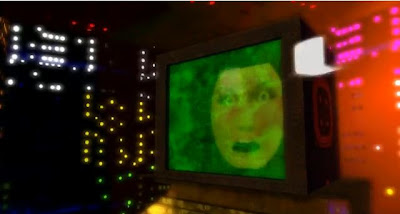 Turns out, he is quite right.

The submissions for the UWA's Machinima contest are on the theme of 'Take our breath away' and obviously with the spectacular art at UWA as the focus, that's not hard. Want to be involved? You can go over to the UWA gallery and vote for your top 8, you've got a few more days to do so, check out the UWA website for more info. The always savvy JJ has made a showcase of showcases, reflecting back on his own gallery, but it's a shame that, with over 800 pieces of art submitted to UWA over the past year, and more than 30 prizewinners from the monthly competitions, so many people have gone for the obvious, like Igor's spermy Chaos in Order or Gleman's Einstein. 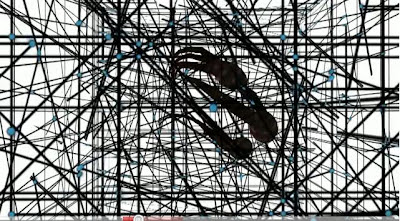 This isn't always the case,  the mega-long submission by Rysan Fall - a whopping 14 minutes of melodramatic violins and papyrus font - includes Atomic Gaffer's Atomic Go Round, and Ichiko Miles' Consolation of Philosphy.
Like the art in UWA itself, this is a mashup of levels of ability and resources; some people using fancy editing suites while others have barely adequate graphics cards. Just having all the gear doesn't make you a good filmmaker, though. Some of the best ones are clearly made on a shoestring. Seen one after another, the creeping transitions, epic music and 20 seconds of opening titles very soon become annoying. Not to mention the bios. Good lord.  Standard operating practice in SL, it's the usual gush of self-praise, "I'm a composer, AND an illustrator, writer, scripter, painter, DJ, videographer AND film maker, fashion designer and architect, plus I'm in a band." Hey, da Vinci, thinks the reader, you do know that we know you're stuck at home, wearing slippers and cat hair, right? 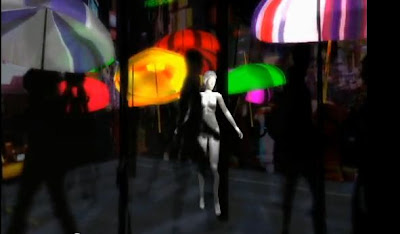 Quite a lot of them are 'visits' to the gallery, this one is Aphrodite in the artwork (here among Nish Mip's umbrellas) by Kafka Moody. I kind of liked Chantal Harvey's short, upbeat presentation of google earth images obscuring the big scripted artwork of Gingered Alsop. Nicole X Moonwall has submitted lots of shorts, which are nice, but the angsty comments that accompany them make me prefer the tribute to The Abyss,  one of 4 entries by Eifachfilm Varcirca; another,  The Deep has a great Czech song as the soundtrack. 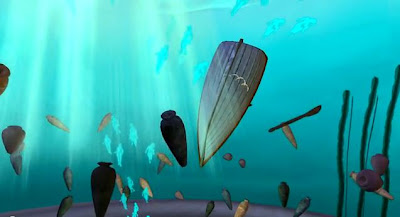 Not that it's supposed to be about the music, but it is the saving grace in a lot of these films.The one with the Voice of God narration makes you rethink the whole eternity in heaven thing. Worse than the VoG is the voice of middle-aged middle America. 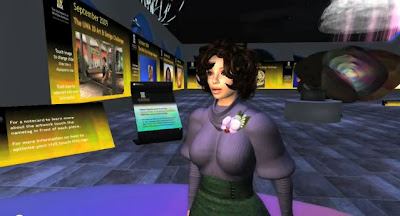 None of the vids that began: "Hi! (lady-smileyvoice) Now I'm going to tell you stuff!" made it past the first sixty seconds. 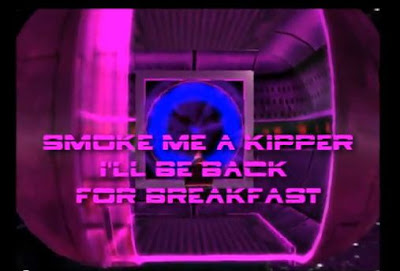 Some of the entries are fun, like Fuschia Nightfire's Cyborg on an art quest 'To a gallery far far away' (yay Red Dwarf!) and Glasz DeCuir's 'Art Theft', but don't miss the more serious  Lessons in Democracy  by Ed Vespucciano. The subject matter, politics, is as dull as ditchwater, but he made a lovely job of showing Rose's work in movement, which is really the point of it all. 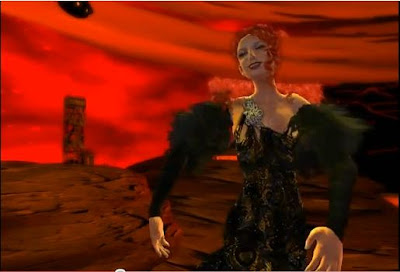 The worst one is probably Hypatia Pickens who apparently thought they wanted audition tapes. It makes you want to go out and buy a Simon Cowell avie. The best one for me is Gladiator by Tutsy Navarathna.  Now there's a girl who gets it.  End of story. 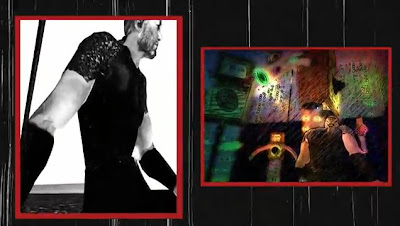