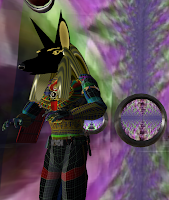 It's a simple idea: take images and sound and make them more than the sum of their parts. Well,
OK, it's a little more complicated than that. There is all that scripting and prim-pinching hoodoo. Thoth Jantzen has been chasing this idea of turning out a different kind of 3D entertainment, prizing open the flat rectangle of a music video on Youtube or Vimeo and expanding it in every direction so that your avatar, ears and eyes become swallowed up in the moment.
When you think of a kaleidoscopic or psychedelic dance environment, you think Tuna, and there's none better. This is something different. Dancing is part of it, but there is a different sort of narrative to Thoth's builds. It's a restless process of refinement, tweaking, and expansion over the past few years, starting with the Cosmique series - you can see the third incarnation,  Cosmique III, on Open Habitat. 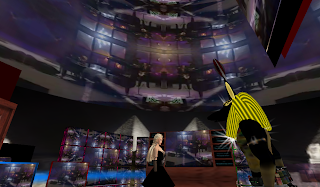 While Cosmique is part kaleidoscope, part gallery, Simplexity, Thoth's latest creation at AHO,  is a new twist on some of the same ideas, but in a post 2.0 viewer world. He chooses videos the old fashioned way, by surfing the web, looking for songs he likes, but straying out of his taste range to explore interesting visual ideas. In general, he likes to choose videos that are a little surreal, but it depends on the song, and whether if it's well done musically and visually, and has the right mix of movement, panning and zooming to keep it interesting. The video sort of paints itself onto the structure, according to the minute changes made to both the prims and the alignment and rotation of the media texture.  Those little alterations bring about an apparently endless stream of nuance. 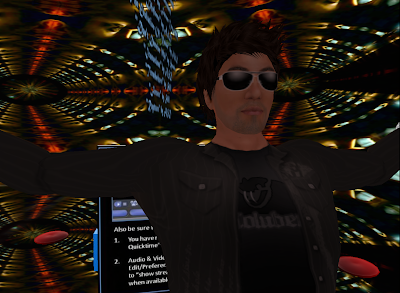 Dennis Fargis has observed them for hours. He found Simplexity through Search, and had been there for days when I ran into him. I asked him if he was enjoying himself.
Dennis Fargis: Absolutely! I have spent every SL minute here since they listed it in the SL Destination GUide. It's pretty clear after chatting with people that the better your graphics ability the cooler this place is. My laptop looks cool here but my desktop looks freaking amazing, and after seeing the graphics for a few weeks here, I am still amazed at the complexity of all the different content. 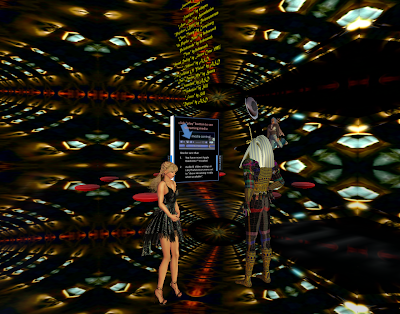 Currently, the playlist at Simplexity features Demoscene visuals, it's a subculture we can all relate to in SL, and makes for some great drama on prim (so much more worthwhile than the usual dramah one comes across in here.) Why do I always look like I need to pee in these photos?
Being inside the action at Simplexity is absorbing without being overwhelming. There's a sort of stillness at the centre, a darkness that frames and holds all the light and colour. You ride down the spiral in a giant ball but even in mouselook the effect is measured, unhurried, never overdone. No wonder Sepp Schimmer's beautiful video of the build is un-messed around with; there's simply no need. 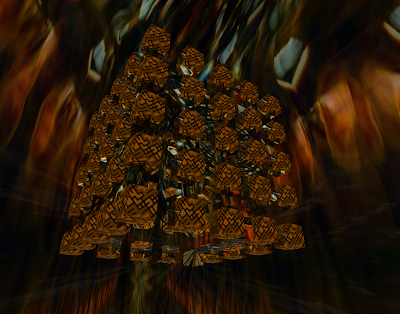 I love this giant cube of cubes that intensifies the images on the walls, and the snowflakes or stars, each one showing a unique twist of the visual moment. But it's the lenses that most draw me in. Simplexity, as all the notecards and copy-n-paste blogs have said, is complexity emerging from something simple. Once inside the build, though, the lines become blurred and you stop thinking of labels and measurements, and just enjoy the show. Nothing else matters.
Thoth Jantzen: A lot of the things here probably have no meaning for anyone else but me. The idea is that people come here and have fun, on whatever level they choose. If they don't grok it, that's ok. The main thing is they are entertained, get out of it what they want. 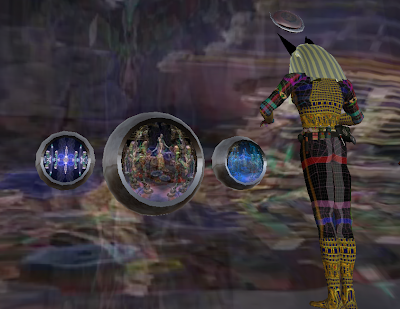 Thoth's work isn't limited to SL. He's present on reactiongrid, with YouCubed, a gigantic moving-media build only partially shown here as it looked this spring. 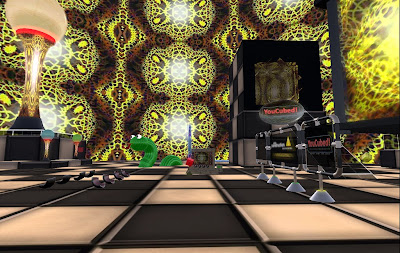 More recently, Thoth's been working hard over at Veesome, where his Club 54 is the first dance venue of the new world. You'll see many familiar elements, like the bug-eyed snake and the fantastic chess board that was part of the original Cosmique I build, and Thoth's been playing with new framing effects that are spectacular. Not to mention the Aurora Virtualis, shown here. 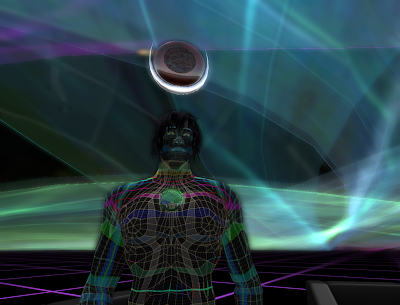 Veesome is a fun if spartan place, it seems more stable than Inworldz, it doesn't have a ghetto-like 'art commune' feel, and Hamlet isn't there, which has to be a huge plus for any world. They need AOs though.
It's the kind of place where people would rather sit around making gingerbread men from space than ranting about mesh, or spamming you with their latest stupid video.
New frontiers, crossed with quiet skill, whether it's helping shape a new world or coming up with refinements and thoughtful additions to his creations - Dennis swears there's a hidden room at Simplexity that he once found and never managed to get back into again - sums up Thoth,  who continues to amaze and delight, chasing the light and his own fascination with movement, meaning and music.